Double Digit Club: The Last Teams To Score 10 Goals In A Match In These Leagues

In top level football, seeing one team notch 10 goals in a match is a rare sight. Bohs' 10-1 destruction of UCD marked the first time a team managed to hit double digits in the League of Ireland since Cork Hibernians defeated Transport 10-1 in March 1960. That got us thinking, who were the last clubs to join the Double Digit Club?

For those that think football began in 1992, the likes of Manchester United and Tottenham Hotspur have all come close to joining the Double Digit Club, scoring nine against the likes of Ipswich Town and Wigan Athletic respectively. However the last team in England's top division to reach double digits was Fulham, who defeated Ipswich Town 10-1 in December 1963. It was part of one of the strangest Boxing Day's in English football history:

Graham Leggat scored 4 goals, including a three minute hat-trick. Bobby Howfield also notched a hat-trick for the Cottagers. The Boxing Day match was played two days before the return fixture at Portman Road. The match programme had this to say:

I can only hope that Ipswich kept up the good work against Fulham at Craven Cottage on Boxing Day. I am afraid that these notes had to be completed long before the result of that match was known so I can only keep my fingers crossed.

Manchester City were ruining football long before they were bankrolled by the Abu Dhabi elite. Back in November 1987, the Citizens ran out 10-1 winners against Huddersfield Town. Paul Stewart, Tony Adcock and David White all scored hat-tricks that day, with Neil McNab opening the scoring for City that day. Huddersfield had only just been taken over by former England international Malcolm McDonald. Huddersfield finished the season rooted to the bottom of the table, and McDonald subsequently retired from management. You can catch all of City's goals below:

The last team to join the Double Digit Club in the top tier of Scottish football was the Rangers side of 1967, defeating Raith Rovers 10-2 in December of that year. The result was a highlight of the two year tenure of manager Davie White, who became the first Rangers' manager to not win a trophy with the club. A certain red-nosed Scotsman by the name of Alex Ferguson bagged a hat-trick that day. Willie Johnston, Orjan Persson and John Greig all notched doubles for the Gers.

We don't have to look too far into the past to find the last team that joined the Double Digit Club from the Spanish top tier. Real Madrid humbled Rayo Vallecano 10-2 in December of 2015. Gareth Bale scored four goals with Karim Benzema adding a hat-trick. Vallecano manager Paco Jemez was incensed after the match, saying:

We feel humiliated and abused. This doesn’t benefit Madrid, or us or Spanish football. We’ve lost a lot of credibility... Nobody won, we all lost. It’s shameful, a disgrace. These are things which happen and I hope that we don’t see it happening again anywhere else.

The last time a side in the Bundesliga joined the Double Digit Club was in 1984, when Borussia Monchengladbach defeated Eintracht Braunschweig 10-0 in October of that year. Both Uwe Rahn and Hans-Jorg Creins got hat-tricks on the day. Curiously, the scoreboard at the end of the match showed the score to be 0-0, as it wasn't designed for double digit scorelines. Monchengladbach ended up finishing fourth that season, with Braunschweig propping up the Bundesliga table. You can see all the goals here.

The last club in the French top tier to hit 10 (ten) or more goals in a match was Bordeaux, when they defeated the footballing arm of Stade Francais 10-0 in September 1965. Bordeaux had seven different goalscorers that day, with Hector de Bourgoing notching four for Girondins. That Stade Francais side had played in the Fairs Cup weeks earlier against Porto, losing 1-0 on aggregate. Since being relegated from Ligue 1 in 1967, the team has fallen through the French football pyramid, and are now playing in the amateur leagues of Paris. 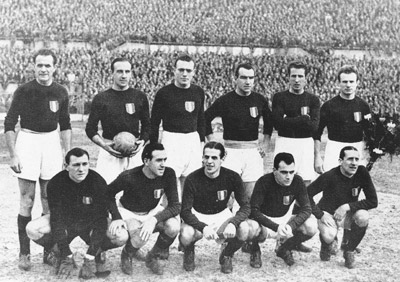 The last team to join the Double Digit Club from the Italian top tier was the great Torino side of the 1940s. Torino defeated Alessandria 10-0 at the tail-end of the 1947/48 season, winning their fourth league in-a-row. The team would win another Serie A in 1949 before tragedy struck in May of that year. The whole team were involved in the Superga air disaster. The plane carrying the team back from a friendly match against Benfica crashed into the retaining wall of the Basilica of Superga. The fallout to the crash was so drastic that the Italian team that travelled to the 1950 World Cup in Brazil by ship.