Steve Staunton's reign as Republic of Ireland manager has gone down as perhaps the biggest disaster the team has experienced over the past few decades.

A legend as a player, 'Stan' had no managerial experience when he was given the job in January of 2006. While the team would show some promise early on, things ultimately went south rather quickly.

The 5-2 defeat in Cyprus remains perhaps our most embarrassing moment in football, but the gift of hindsight tells us that team may not have been as talented as was thought at the time. They were a side in transition, and while the loss in Cyprus was unacceptable, it could be argued Staunton was not the disaster that he was labelled as at the time.

That is certainly the opinion of Kevin Doyle. Doyle was part of the squad at that time, beginning to establish himself in the team.

Speaking on The Buildup this week, he said that he believed Staunton was treated very harshly be the media during his time in charge.

He was under pressure and we needed to win. I remember thinking how desperate I was to play because I thought playing Cyprus meant i could get another couple of goals, we would definitely score and have a few chances, that it would be a good game.

That was my thoughts when I failed the fitness test, from a selfish point of view. I was sitting in the stands and it finished 5-2.

We got on the plane and flew home straight after the game. We landed in Dublin Airport about six o'clock in the morning. I'm not sure what paper it was, I think it was The Star, but the only thing on it was a picture of the starting XI, and underneath it was 'wanted for crimes against Irish football'.

I was like 'thank fuck I've missed that game'. That was the level of disgrace at the time, the sort of scrutiny we were under. We probably deserved it, getting beaten 5-2 by Cyprus, but they were on fire!

Was Stan harshly treated? He only had one campaign. I always think that it was just too soon for him, it was his first job. Now, it's very unlikely that he would be given that job first off.

It went against him because Bobby Robson was meant to be his mentor and helping him out, but he was ill at the time so he didn't have that help. 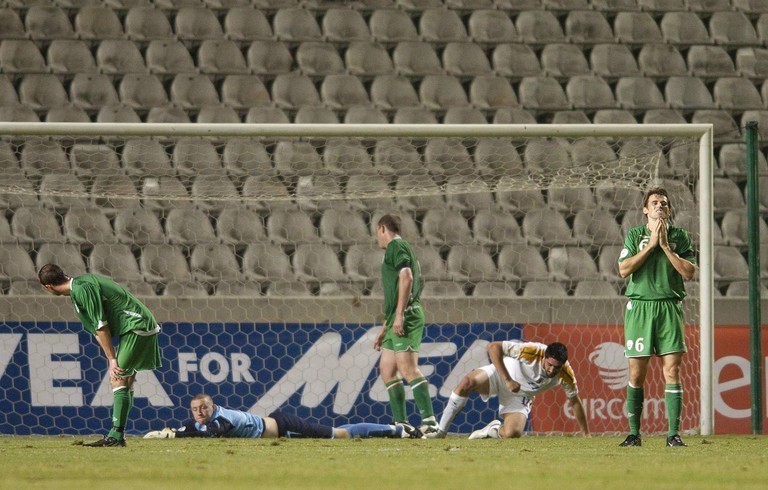 Staunton was dismissed at the end of the campaign, but it had long been clear that he wouldn't be in the job for the long-term.

The media had long made a mockery of his time in charge, crossing the line at times. Doyle believes he never really had a chance, and actually could have been a success in different circumstances.

One of the radio shows started doing the voice of Stan and it just seemed to make it a piss-take when it wasn't as bad, looking back at it now, as it seemed at the time.

He was under pressure, you could see it in him. He was an Irish legend with so many caps, and to go from that to being manager and ridiculed.

Papers turned up with people in costumes to training sessions, I can't remember what the characters were, but trying to make him look like he was taking a picture with one of these cartoon characters.

It was just silly stuff going on all the time trying to undermine him and it made it very difficult for him to do his job. Looking back I do feel very sorry for him because I'd imagine a took a lot out of him. I do think under different circumstances he could have been a perfect fit for him.

You can subscribe to the podcast via Spotify, iTunes, Pocketcast or all other good podcast platforms by searching 'The Buildup on Balls.ie'. If you enjoy it, please do leave a comment and give us a rating.

The Buildup Podcast republic of ireland