Drogheda United assistant boss Kevin Doherty cut an irate figure after his side were dumped out of the FAI Cup on Saturday afternoon at the expense of Derry City.

The Boynesiders finished the game with nine-men before losing on penalties against the Candystripes at Head in the Game Park.

The main bone of contention for Drogheda’s number two Doherty was the dismissal of James Brown.

Brown was sent off for a second yellow after being accused of simulation by referee Paul McLaughlin.

To make matters worse, Drogs boss Tim Clancy was then sent off for dissent for his protests.

Speaking after the game with LMFM, Clancy’s number two was left in no doubt that the decision to send off Brown played a pivotal role in swinging the FAI Cup tie in the favour of the visitors.

That’s the second time this year that we’ve had a player sent off for what I can assume of being accused of diving against Derry, and both of them are penalties.

I’m trying to keep calm here because we do not deserve that. The same referee gave a penalty [against us] in Tallaght on Sean Gannon, and it was no more a penalty than me standing next to you.

I’m really really disappointed. To send Jimmy Brown off and change the game like when we were going through into the next round of the cup…

We had a really tough draw and for that to happen is absolutely shocking. I have 100 messages on my phone saying that not only is not a dive, it’s a penalty. Who knows, he might miss the penalty, but I’m really, really disappointed.

The lads are the best bunch of lads that I have ever worked with. We were playing with nine-man for 40 minutes against a full-time team in that heat.

It’s absolutely scandalous. I never lose the head like this, but this is scandalous what happened. I don’t like pointing fingers, but I think we all know where the finger is pointed. It’s shocking.

Jimmy not getting a penalty, red card and he is now suspended!! No water break with 9 men in that heat is a serious breach of player health and safety. But our lads were still MAGNIFICENT and deserved more #wearedrogs 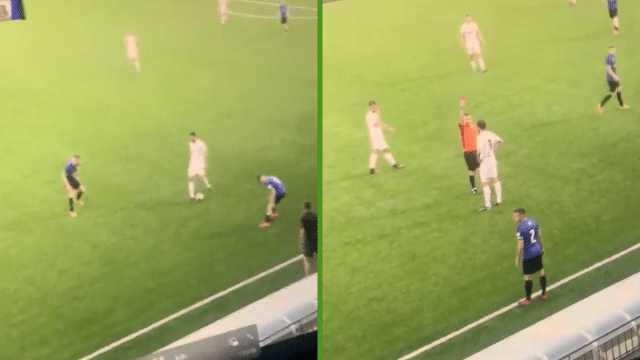 Football
4 months ago
By Andrew Dempsey
Drogheda Boss Fumes At Treatment Of Managers By Referees
Football
11 months ago
By PJ Browne
Louth GAA Chairman Apologises For League Of Ireland Comments
Football
1 year ago
By Sean Meehan
Each Current League Of Ireland Club's Best Jersey From This Century
Popular on Balls
Rugby
2 days ago
By Colman Stanley
Keith Earls Shares Story That Captures Andy Farrell's Decency
Football
2 days ago
By PJ Browne
'If He Continues With Performances And Goals Like That, Stephen Kenny Will See It'
Football
2 days ago
By Eoin Harrington
Quiz: Name Every Player To Score In A Champions League Final
Football
20 hours ago
By Gary Connaughton
Portsmouth Likely To Retain Gavin Bazunu This Month Despite Championship Interest