FA Trophy Game To Be Replayed After Farcical Abandonment 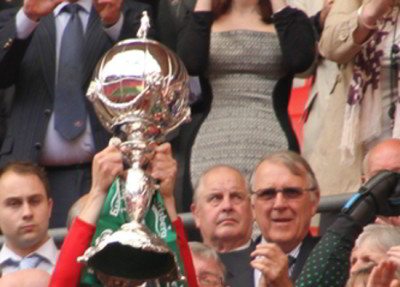 The English FA has confirmed that Saturday's FA Trophy match between Colwyn Bay and Altrincham will be replayed in full on Tuesday after the original fixture was abandoned in farcical circumstances.

Colwyn Bay were trailing 2-0, when the referee injured his calf in the 83rd minute. According to the BBC, the home side then rejected a replacement from the crowd, claiming he had been drinking. Altrincham chairman Grahame Rowley told the BBC:

"There was an announcement asking if there was an official. We put forward a fan [to run the line], who is a level-five qualified referee. Colwyn Bay turned that down."

While Rowley wanted the game to be awarded to his side because they were "dominating", Colwyn Bay expected the game would be replayed in full. Their manager, former Chelsea player Frank Sinclair, told BBC Radio 5 Live:

"You can't just have any Tom, Dick or Harry come in and finish the last 10 minutes of the game. There was no-one on our side that had any officials' badges. One of their staff said he would see the rest of the game out with no qualifications. It's human nature that if there was a big decision to make, we wouldn't have got it."