Dundalk continued their recent resurgence last night, with Vinnie Perth's side running out 1-0 winners over Shamrock Rovers at Oriel Park.

Sean Murray was the man that got the goal, with his first half strike proving to be the difference between the sides.

Sean Murray is on the mark again to give @DundalkFC the lead against @ShamrockRovers #rtesoccer #LOI pic.twitter.com/wNDPKyDvag

The result moved the home side up to sixth place in the table, with Dundalk slowly moving away from relegation trouble.

Of course, it has been a turbulent year at the club. They have lost a number of key personnel, with the likes of Michael Duffy and Patrick McEleney also set to move on at the end of the season.

Sean Gannon is another one of their players that departed in recent times, joining Shamrock Rovers earlier this year. Last night's game marked the first occasion that he would play in front of a crowd at Oriel Park since his departure and it's fair to say he did not receive the warmest of welcomes.

Not only did some home fans wave pieces of paper at him to imply that he left Dundalk for the money, but someone also took the extreme step of throwing a pig's head onto the pitch.

It has been some opening 10 minutes or so in Oriel Park. Dundalk - and the crowd - fired up for this and so far there has been fake money and a pig's head thrown on.

This is far from a first in football.

Back in 2003, Luis Figo's return to Barcelona as a Real Madrid player was met with the same gesture, with a huge number of the Camp Nou crowd unhappy that the Portuguese star had joined their great rivals in a world record transfer deal.

In 2003, Figo went back to the Nou Camp after the transfer to bitter rivals Real Madrid. At one point a pigs head was thrown on to the pitch as he was taking a corner. pic.twitter.com/nkXB5luvhY

Gannon spent six years at Dundalk after joining from St Pat's back in 2014, although he took the decision to leave the club at the end of last year due to their reluctance to offer him a long-term contract. 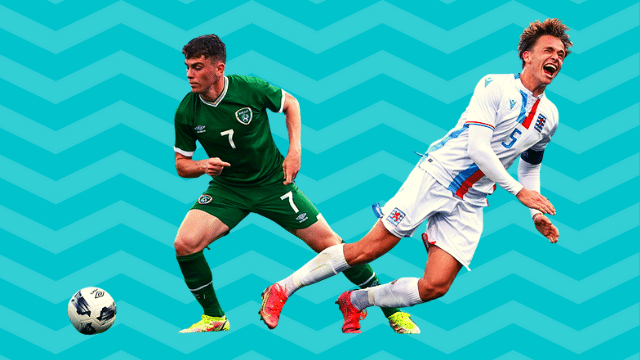 Football
1 day ago
By Colman Stanley
Michael D. Higgins Gives Rallying Cry For League Of Ireland On Late Late
Football
5 days ago
By John Dodge
The Greatest LOI Wrap Up In The World: Ruthless Rovers And Athlone Town Women Rising
Football
1 week ago
By Colman Stanley
'You Get To Express Yourself': Will Patching Thriving At Derry City
Popular on Balls
Golf
3 days ago
By Gary Connaughton
Padraig Harrington Glad He Didn't Have To 'Make A Decision' On Saudi Golf League
Rugby
1 day ago
By PJ Browne
The Last Munster Team To Win Silverware: Where Are They Now?
Football
4 days ago
By Gary Connaughton
Darron Gibson Was Often Mocked By United Teammates Over Bobby Charlton Advice
Football
1 day ago
By Gary Connaughton
Paul Merson Feels Liverpool's Season Can't Be A Success If They Don't Win The League