This season has been nothing short of an unmitigated disaster for Manchester United.

It was a campaign that started poorly, although there was some hope that things would improve after the sacking of Ole Gunner Solskjaer. As it turns out, the worst was yet to come.

United have been absolutely abysmal in recent months, leading to serious questions about the squad of players currently at the club. They certainly don't seem to be putting in maximum effort under Ralf Rangnick, with some of their performances over the last few weeks bordering on disgraceful at times.

The 4-0 loss to Brighton at the weekend was arguably their worst showing of the season, a category in which there are no shortage of contenders.

Speaking on The Stand, Eamon Dunphy and John Giles said that this performance was 'shameful' for a club of Manchester United's stature.

Dunphy: I never saw a team less up for it than the Manchester United team were for that match. I couldn't understand that Juan Mata is leaving the club next week, and he started the last two matches?

This was unbelievable stuff. Brighton walked the ball into the net for some of their goals and could have scored three or four more.

Giles: I think when it gets to the situation that Manchester United got into in the last few months, it gets worse. Looking at the match, all I saw from Ronaldo was him laughing...

They've been in a really bad situation for the last 12 months, it has gotten worse as it has gone along. Then they get the interim manager in and the lads know that this guy is not going to be here next year, it becomes dreadful. It's never going to get better, it's only going to get worse.

Every match it is getting worse. This was really bad at the weekend, it was shameful for a club of that stature. The players didn't care, you could tell.

Brighton had scored 12 goals in 18 league home games this season prior to Saturday's contest, meaning 25 per cent of their home goals for the entire campaign came in the 90 minutes against Manchester United. In truth, their tally on the day probably should have been even higher.

The club are already guaranteed to end the campaign with their lowest point total of the Premier League era. Erik ten Hag will come in during the summer, although he certainly has quite a task on his hands to turn things around at Old Trafford.

Liam Brady is of the opinion that very few members of the current squad warrant their place at the club moving forward.

Brady: That really was rock bottom as far as I'm concerned. None of the players were really interested in trying, I think they want the season to be over and done with. They want their futures to be sorted out, whether they are staying or going.

They completely downed tools under this manager. It was awful if you're a Manchester United supporter.

Dunphy: They took Juan Mata off after 70 minutes and they put Harry Maguire on? The only conclusion I drew at that stage was that they were trying to keep the score down.

Brady: It's a mess. You could go back months. I think if you go back to when Atletico Madrid knocked them out of the Champions League, they all downed tools after that.

When you’re the interim manager, the players aren't going to knuckle down for you. The manager doesn't have the authority that he ought to have. The people upstairs who make those decisions need to have a long hard look at themselves...

Looking at that team who played against Brighton, you wouldn't want any of them in your team next season.

Ten Hag is sure to be given money to spend in the summer, although refreshing that squad will not be a straightforward task. There are a number of highly paid players that have poor attitudes, meaning moving them on in the months ahead is not necessarily a given.

As well as that, recruiting high quality signings could be difficult considering the current state of the first team.

One thing that is for certain is that the club are in major need of a clean-out. 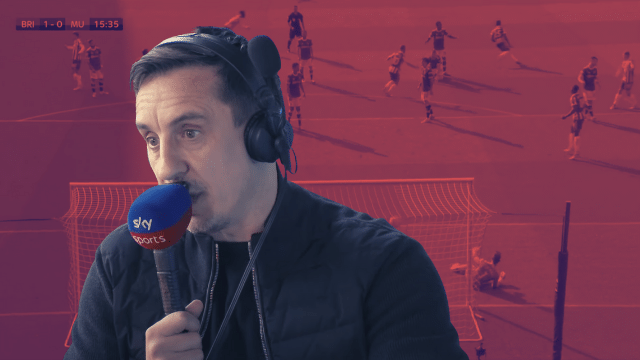