Each Current League Of Ireland Club's Best Jersey From This Century

It makes us feel as though we have the sartorial elegance of a high fashion house. Of course, most of us spend our time in battered jeans and tops a tad tight around the chest area, but we can dream.

The lockdown has given us time to look back, reflect, ponder and other synonyms, particularly around the ever-changing world of sports fashion. With nostalgia-invoked, we've decided to give a 'definitive' look at each League of Ireland club's best jersey from the 21st century.

There's no particular criteria in crowning a team's best shirt. It could be down to the players that donned it, sheer aesthetics, maybe just the memories made while it was worn.

Furthermore, there'll be a mix of old and new, we've got to keep it spicy, sure. 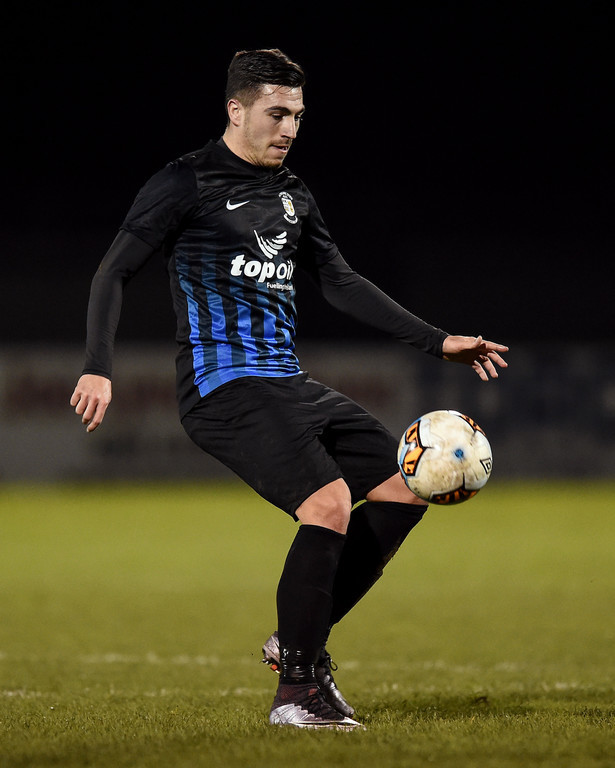 Athlone's entry comes from one of the most tumultuous seasons in the club's history. Mystery men pulling strings behind the scenes, accusations of match-fixing, Athlone Town's 2017 season felt like a Dream Team storyline.

Amidst the chaos, at least their jersey was gorgeous. A predominantly black number with their classic blue stripes fading into the darkness. It was a jersey that warranted more than finished bottom of the entire League of Ireland pyramid. 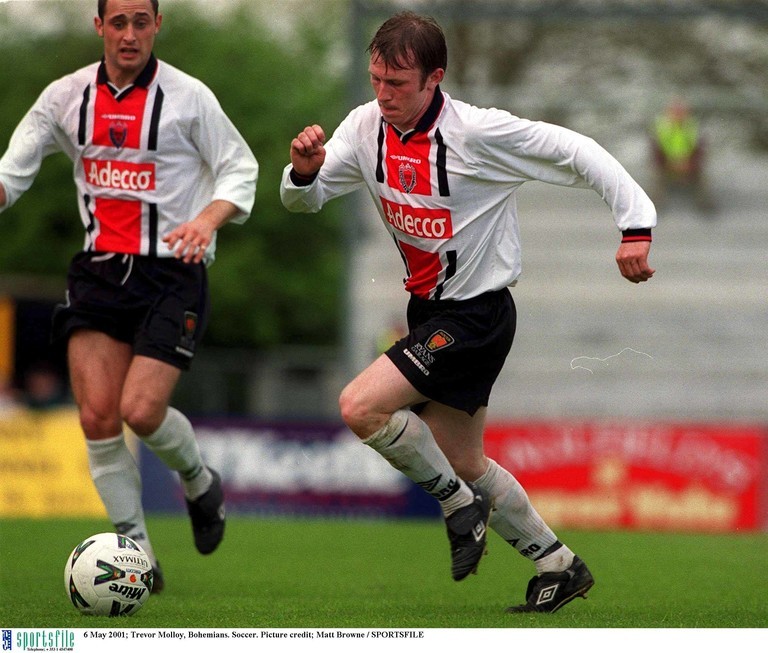 Of course, this jersey lives long in the memory of Bohs fans due to their European run in 2000, when the Phibsboro side defeated both Aberdeen and Kaiserslautern away from home in the UEFA Cup. They also won a league and cup double that season, before Roddy Collins' acrimonious departure. 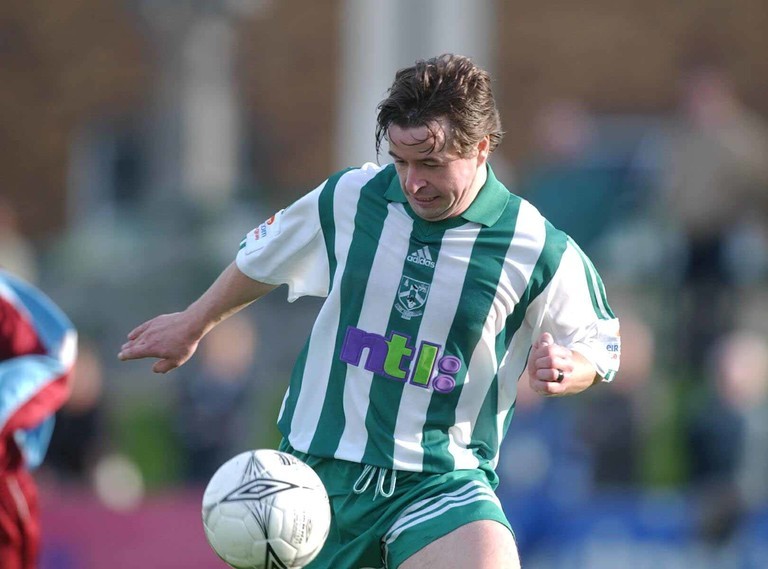 Truth be told, it seemed like Bray Wanderers wore this jersey for ten years at the start of the millennium, but could you blame them?

Crest, supplier and sponsor all centralised, stripes on the torso only, the collar feeding into the green stripes, you couldn't get better if you tried. Also, the 'ntl:' sponsor, peak early-2000s, an utter gem. 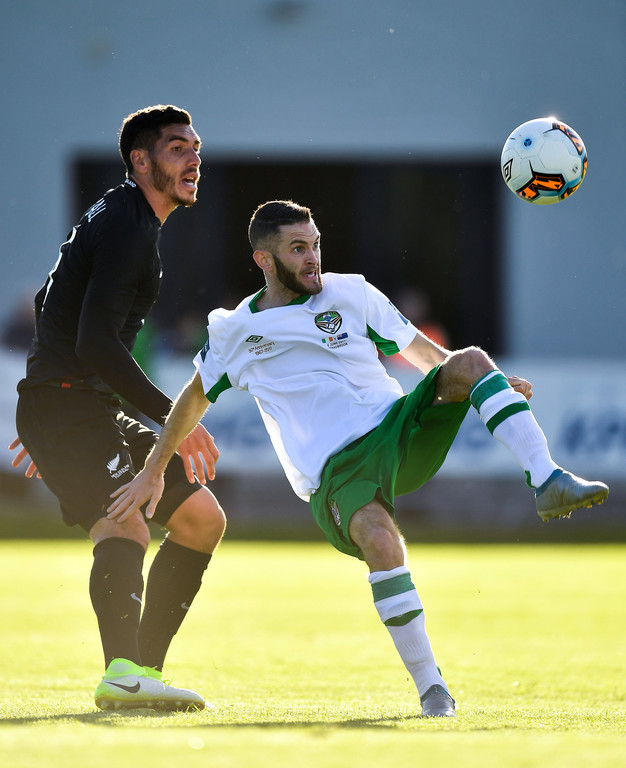 The League's newest members (Shamrock Rovers II fans look away now), Cabinteely haven't got a plethora of kits to mull over.

This simplistic number from 2017 is the winner, although Uhlsport's newest offerings haven't been too shabby either. Sometimes, you can't beat block colouring. 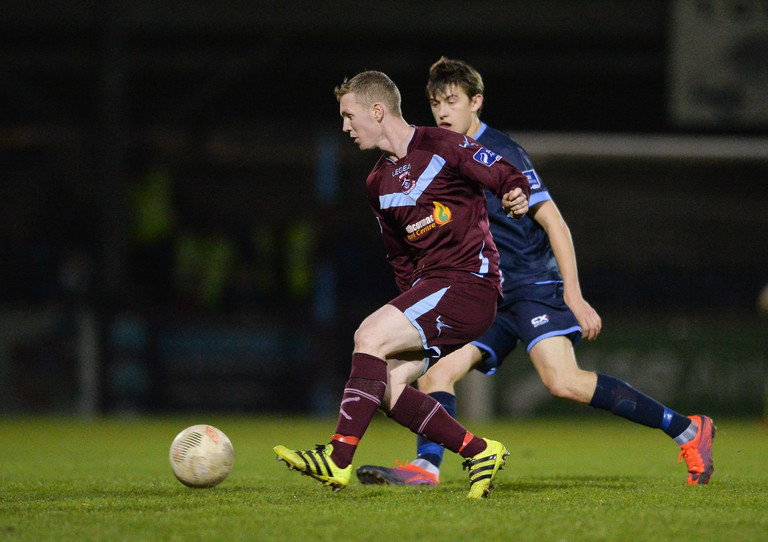 Chevrons are cool. Chevrons can transform the perception of a jersey and they do on this Cobh Ramblers home kit.

There is genuinely not much more to add, we just love chevrons. 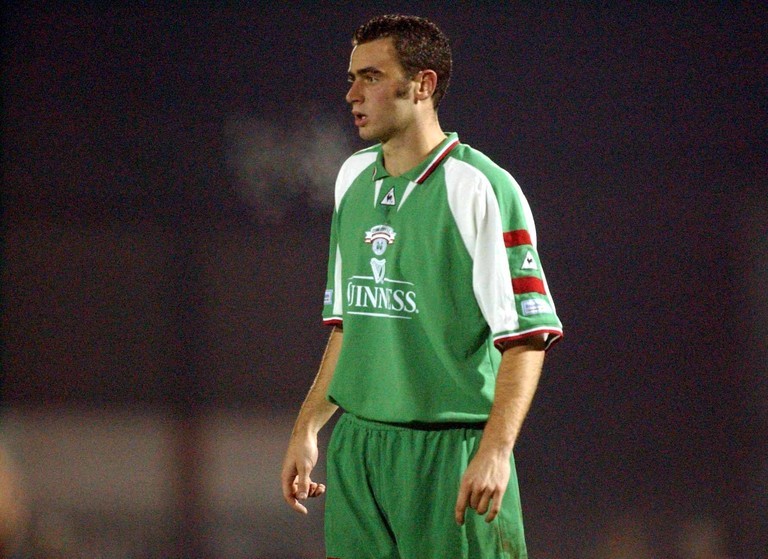 Cork City's collection of jerseys from the 1990s are probably the best decade of kits from any League of Ireland club. The 2000s weren't as decorated, but they did have some gems.

This all-centred Le Coq Sportif number is jazzy yet refined. The logo within the collar (as well as on the sleeves), it's a lovely touch. 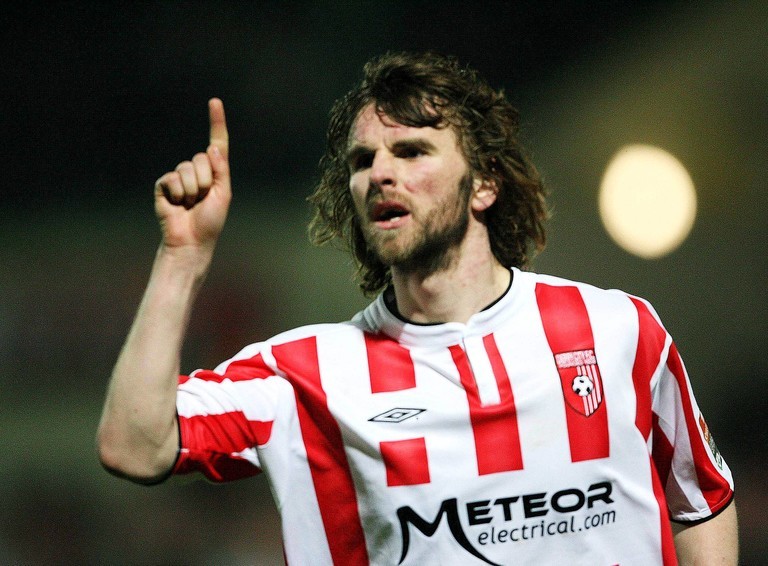 There may have been nicer Derry City jersey from this century but there are none that contain the memories of this shirt.

Worn throughout the club's historic European run in 2006, as well as being worn as the Candystripes won the final football match at the old Lansdowne Road, beating St Patrick's Athletic 4-3 in a brilliant final. It was worn with distinction by the likes of Paddy McCourt, Killian Brennan and Mark Farren. It's even got the old crest on it.

It's just an iconic piece of fabric. 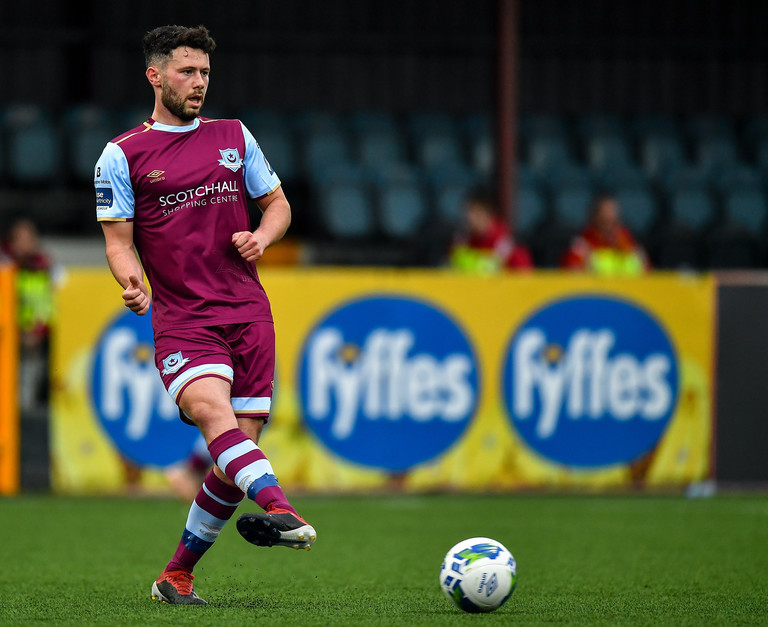 The only kit from this season but it is well worthy of its place on this list.

Umbro went above and beyond with this gem, the gold trim works magnificently with the claret and blue. Also, the shading on the torso is magnificent. 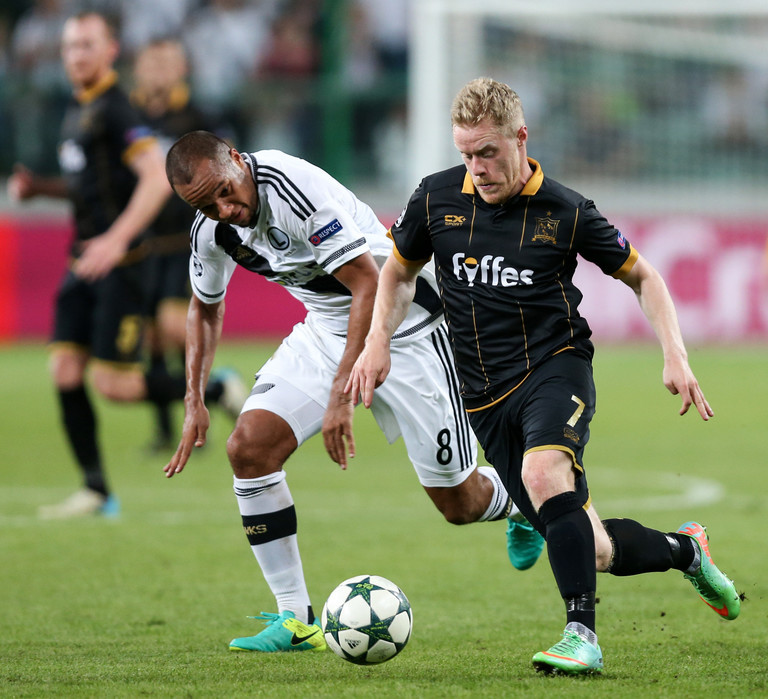 Another jersey that wins out for the memories it holds, this CX Sport number is probably the best kit they produced for the current champions. The black and gold works well with the 'Fyffes' sponsor and the duotone crest.

Above all else, this was the jersey synonymous with Dundalk's spectacular European run in 2016, coupled with their eventual league title win. The 3-0 win against BATE, Robbie Benson's strike against Legia, they're all intertwined with this shirt. 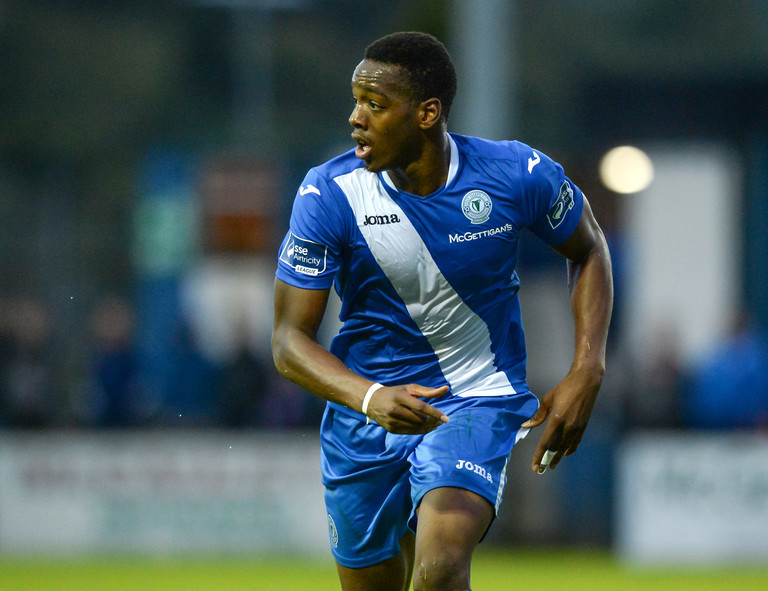 Sashes don't have the same universal appeal as chevrons, but when done correctly, they're iconic.

Joma nailed this Finn Harps home top, with the small 'McGettigan's' sponsor underneath the crest a perfect touch. 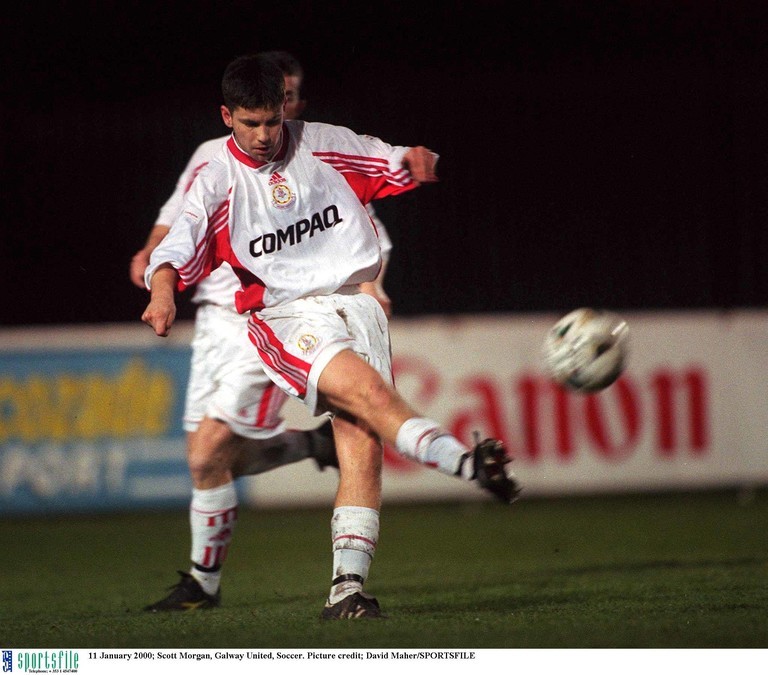 Are we cheating with including a jersey that was also used during the 90s? No, we made the rules and we decided it's okay.

This Adidas template is utterly gorgeous, right down to the shading on the whites of the jersey. The red secondary colour stands out spectacularly too. Also, centred logos are our jam. 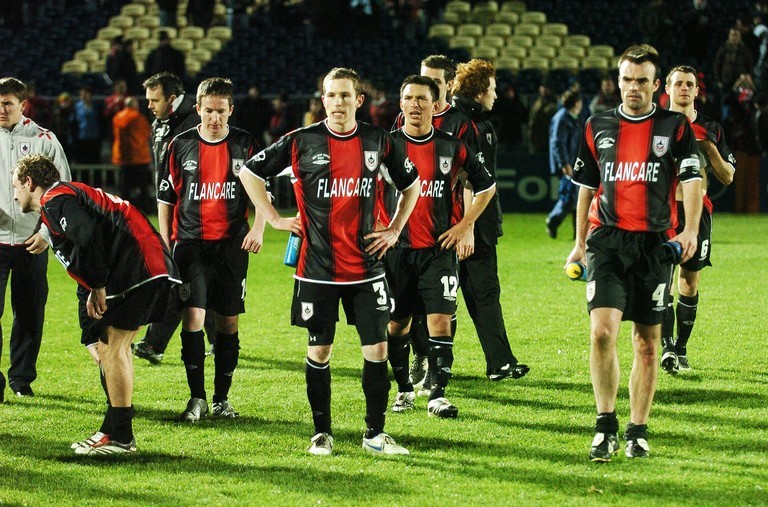 We could have gone for the Masita jerseys which saw Longford Town rise to prominence under Stephen Kenny and win two successive FAI Cups under Alan Mathews. However, that would've been too easy.

Instead, we're going for the chunky stripes of this Umbro home jersey. Red, black and white is a clean colour scheme, with the white trim popping in all the right places. Plus, we had to pick a jersey with the iconic 'Flancare' sponsor. 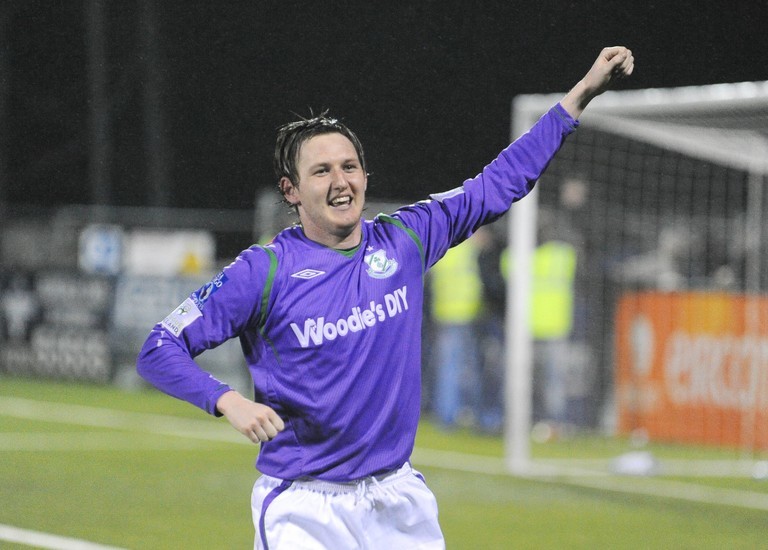 Purple and green isn't an easy colour scheme to pull off, but it's one that pops up time and again as a Shamrock Rovers alternate. Even this season, Umbro have returned to it as Rovers' away jersey.

When it's good, it's great, and 2009's away jersey was just that. The arrival of the team to Tallaght Stadium, witnessing Cristiano Ronaldo's Real Madrid debut, the introduction of Gary Twigg and Michael O'Neill, this shirt saw it all. 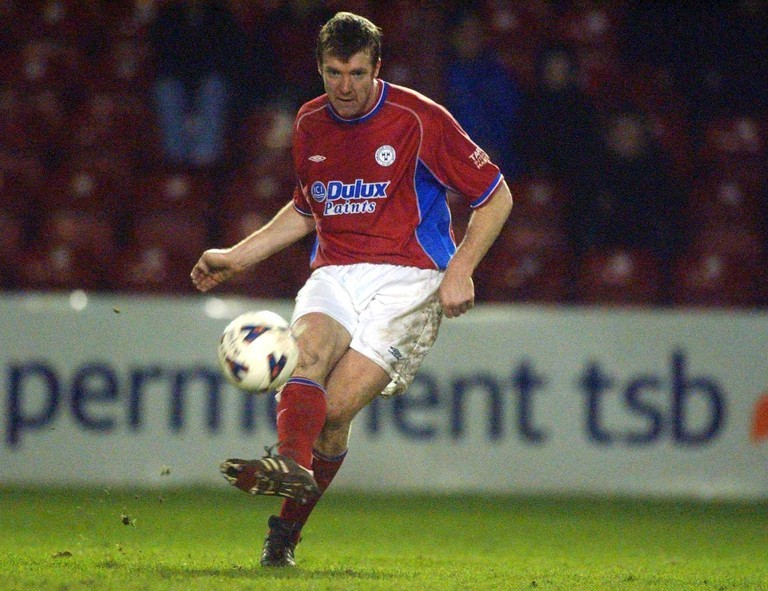 Although the home jersey that succeeded this holds the memories of Deportivo La Coruna and Dave Rogers spanking the ball past Hadjuk Split, the red and blue colour scheme worked to perfection on this effort.

Utilising the template Ireland had for their 2002 World Cup jersey, the jersey matches all over. The blues of the 'Dulux' sponsor are shared in the trim, the whites spread around too. It is a quality use of tritone. 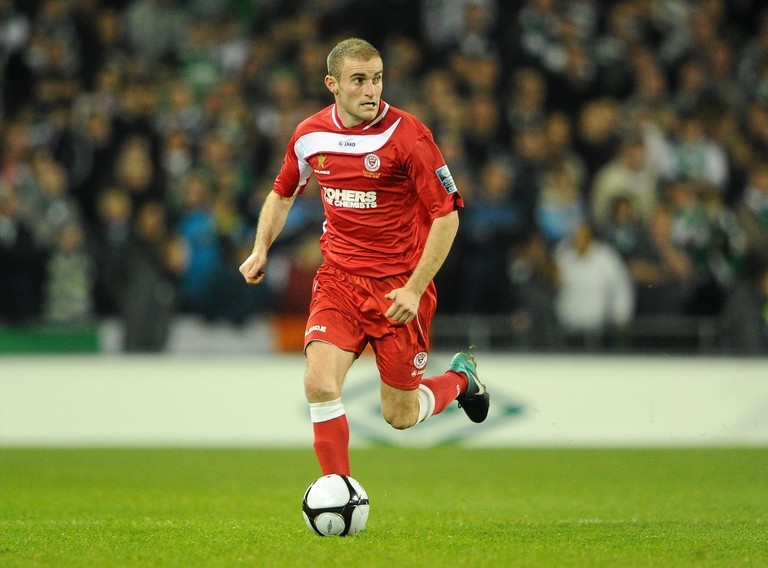 Sligo Rovers, Tohers Chemists and Jako were partners for what seemed like an eternity, so it was tough to sift through their efforts. 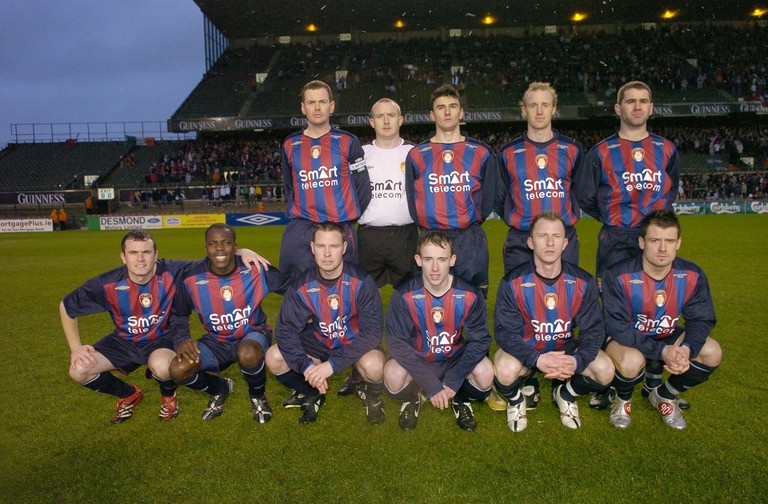 We've already mentioned that windswept day in December 2006 when Derry City beat St Patrick's Athletic in a 4-3 thriller, but it also marked the debut of an iconic piece of Pat's kit.

'Patselona' was born on that day, with the colour scheme ripped from the Catalan club. It didn't see any real success, but it looked damn good. 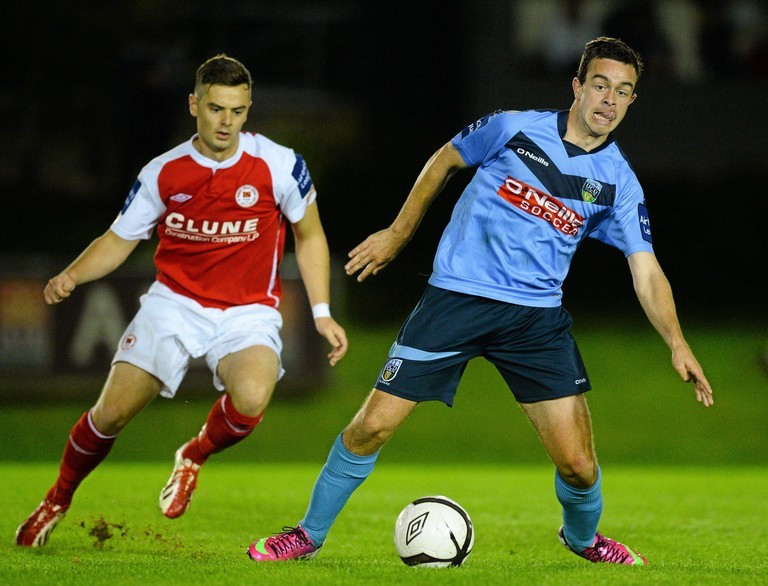 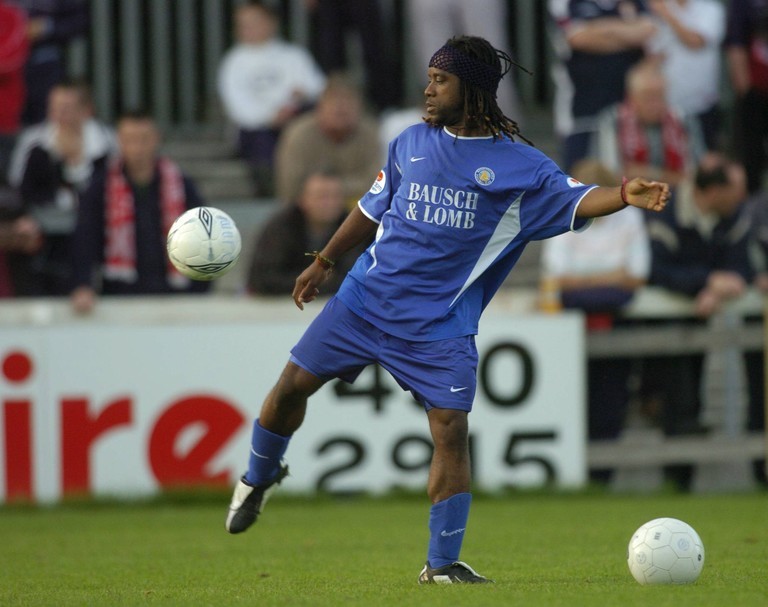 A classic Nike template, but it's one that's synonymous with Daryl Murphy in the South East.

Blue and white is a duo that's hard to get wrong, and this Nike kit is simplicity at its finest. It helps that the Blues didn't wear it in their gut-wrenching FAI Cup final defeat to Longford Town too. 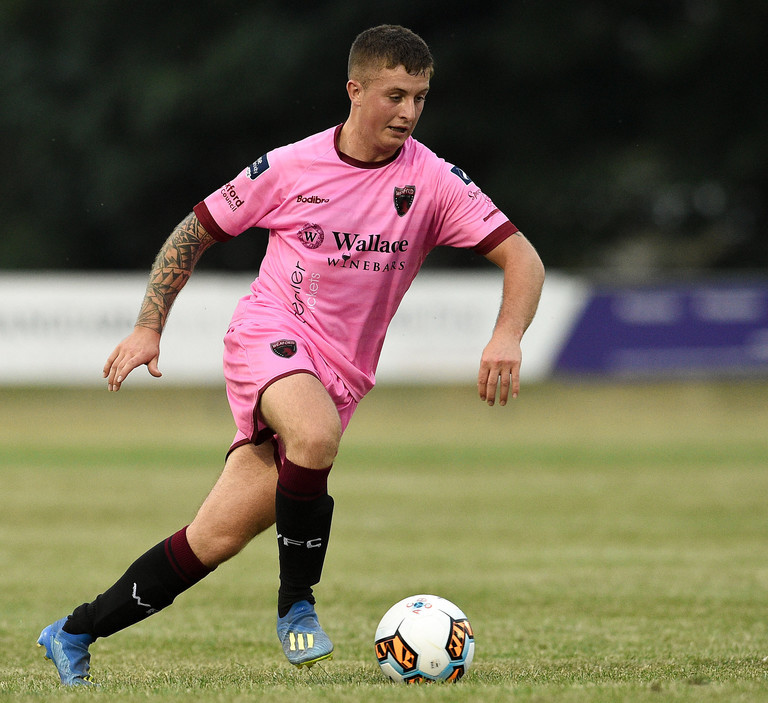 You have to admire how head strong Mick Wallace is in a sartorial sense. Pink is the new black, according to the MEP. However, subtly isn't his strong suit.

Although admirable, having pink as your primary colour is going to lead to more misses than hits. Likewise, having 'WALLACE' in WordArt-like font isn't going to do much either. So, this simple number from 2018 gets our vote.