Paul Pogba has flattered to deceive for the vast majority of his Manchester United career.

He can go on runs for a couple of weeks where he is incredible, but this is always followed by long spells where he looks to be a liability on the pitch. He seems to be very much in the latter category at the moment.

The Frenchman started in midfield during Saturday's loss at Leicester City, getting largely run off the pitch as Brendan Rodgers' side secured a 4-2 victory.

Playing alongside Nemanja Matic, the pair did little to stem the tide of what was continuous pressure from the home side. Pogba looked as though he lacked energy and interest, making him questioning his teammates in his post-match interview all the more bizarre.

"We need to find something, we need to change something." 👀

Paul Pogba offered an honest assessment of another disappointing #MUFC display following their 4-2 defeat away at Leicester.. pic.twitter.com/FUy71E15rN

Considering the player's performances, contract situation, and constant noises about wanting to leave the club, Eamon Dunphy has seen enough of Paul Pogba at Manchester United.

Speaking on The Stand, the former RTÉ pundit slammed the player's behaviour off the pitch and questioned if he is really giving his all at club level.

[Solskjaer] started with Pogba and Matic in midfield, which is crazy. I think Matic can't get around anymore. He brought Maguire back from injury in with Lidelof, and Leicester killed them.

There is a problem there, and he is the problem - Ole Gunnar Solskjaer...

Pogba and Matic as a pair? Pogba has no change of pace, even if he is trying.

Last week, they were saying he had been offered a £400,000 per week contract by United which he hasn't signed. He is a free agent at the end of this season.

Two weeks ago, his agent quoted as saying that [Pogba] loved Juventus and would love to go back to Juventus. Last week, it was that he loved Real Madrid and had a special place in his heart for them...

Manchester United Football Club have a player who is out of contract at the end of the season and he is acting the maggot with statements every single week.

How bad is that? It's disrespectful to his teammates and Manchester United. This is all part of the results, it comes out in the wash...

They are suffering through terminal embarrassment. [Cristiano] Ronaldo won't be happy and clearly isn't. He walked back to the club, and he clearly loves it after the great times him and Ferguson had.

But what he has walked back into is not the club that Alex Ferguson managed in any way...

Solskjaer left him on the bench a couple of games ago and Ferguson was caught on tape saying 'you always start your best team', having a go at Solskjaer.

It doesn't look like anything can save him. Meanwhile, they're dropping points they shouldn't be.

Pogba's contract situation does not seem any closer to being resolved, with United keen to get the player to sign a new deal.

As Dunphy mentions above, his agent Mino Raiola seems to be pushing for a move elsewhere. Should that materialise, United could well regret not taking a sizeable fee for the midfielder over the last couple of years.

SEE ALSO: Richard Keys' Suggestion For Next Newcastle Boss Is As Bad As You'd Expect 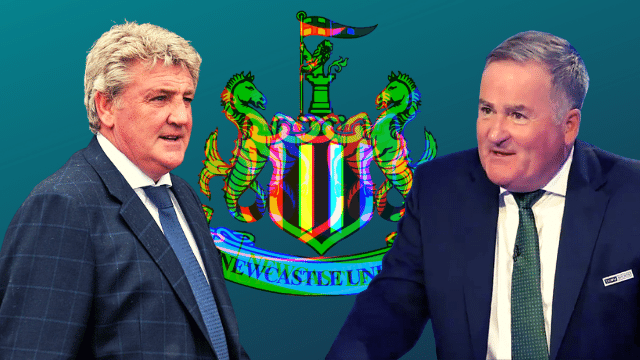