UEFA made a complete mess of the process, meaning a second draw was required to take place three hours after the original.

Of course, this suited some teams better than other. The likes of Manchester United and Atletico Madrid will be delighted with this switch, with those two teams now facing each other as opposed to PSG and Bayern Munich respectively.

However, none will be more peeved with the outcome than Real Madrid.

Having originally been drawn to face Benfica, they will instead come head to head with PSG. For all of the French side's problems, along with Chelsea they were still the most difficult unseeded team remaining in the competition.

We can only imagine what Florentino Pérez's reaction to the whole situation was.

Luckily for us, we know exactly how El Chiringuito took it.

The Spanish show has become infamous in recent years for their completely over-the-top takes on all things related to Los Blancos and this would be no different.

There would be a mix of joy and consternation among those in the studio, unsurprisingly split directly down the split Barcelona-Madrid allegiances of those present.

We can only imagine how they will react if Lionel Messi ends up dumping Real Madrid out of the competition in the new year.

SEE ALSO: UEFA Made An Absolute Mess Of The Champions League Last-16 Draw 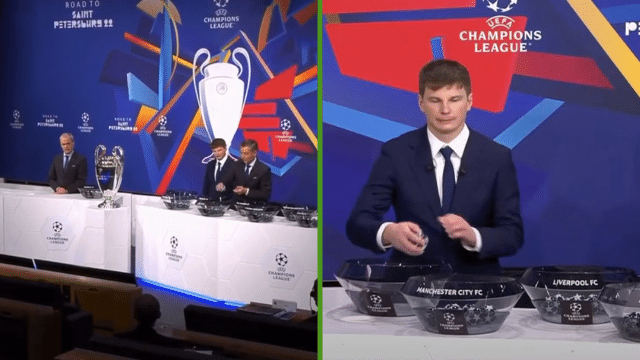 Football
6 hours ago
By Gary Connaughton
Quiz: Name Every Club To Play In Just One Champions League Final
Football
4 days ago
By Eoin Harrington
Quiz: Name The Only Player From These 20 Countries To Play In The Champions League Final
Football
5 days ago
By Eoin Harrington
Remembering The Best Same-Nation Clashes In The Champions League
Popular on Balls
Rugby
1 day ago
By Colman Stanley
Bundee Aki Apologises For Confronting Ref After Connacht Concede Late Try
Football
1 day ago
By Gary Connaughton
Report: Newcastle United Lining Up Move For Euro 2020 Star
Snooker
10 hours ago
By Gary Connaughton
Ronnie O'Sullivan Couldn't Get Over Stunning Mark Williams Escape Shot
Rugby
2 days ago
By Jonathan Browne
Who Is Karl Martin? Meet The Young Drogheda Man Making His Debut Against Leinster