Not a bad way to respond to the recent controversy.

Celtic have ended a difficult week on a high, securing a 4-1 victory over Motherwell at Fir Park. The first three goals from Mohamed Elyounoussi, the player who was heavily criticised for his actions in midweek.

Neil Lennon's side saw their Europa League campaign all but ended with a 4-1 defeat to Sparta Prague in midweek, with Elyounoussi causing a storm when he was caught using his phone whilst sitting on the bench.

With Shane Duffy dropping out of the starting XI, Elyounoussi would open the scoring inside the first ten minutes. The Norway international reacted quickest to Albian Ajeti's rebounded effort, tucking home from close range.

That's just the start Neil Lennon will have wanted!

He would have a second before the half hour mark.

Tom Rogic was the provider, showing some tidy feet in the box before his pullback picked out the 26-year old.

Elyounoussi is at the double! 👏👏

Fantastic feet from Rogic, and Elyounoussi makes no mistake in front of goal!

Motherwell really should have been reduced to ten men early in the second half, but Devante Cole somehow got away with this challenge on Jeremie Frimpong.

Declan Gallagher got Motherwell back into the game with a second half header, but Elyounoussi's third sealed the victory for Celtic.

He climbed highest at the far post to meet Hatem Abd Elhamed's cross, producing a powerful header into the bottom corner.

A fourth goal from Olivier Nchtam late on put the icing on the cake, with Celtic now sitting six points behind Rangers having played a game less.

SEE ALSO: Southgate Addresses The Elephant In The Room Ahead Of Ireland Game 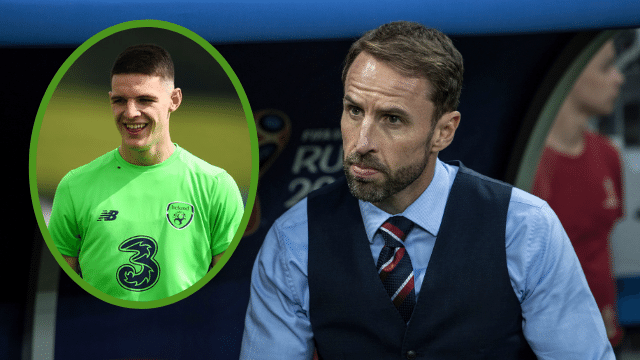 Football
1 day ago
By Emmet Bradshaw
Anthony Stokes Is On Trial With Shamrock Rovers
Football
1 week ago
By Gary Connaughton
Report: Celtic Eyeing Move For Experienced Premier League Goalkeeper
Football
2 weeks ago
By Gary Connaughton
The Unknown Ange Postecoglou Actually Has The Pedigree To Be Successful At Celtic
Popular on Balls
Football
18 hours ago
By Eoin Harrington
Sadlier And Duff Powerfully Put The Boot Into UEFA Over Rainbow Flag Stance
GAA
21 hours ago
By PJ Browne
'I Look At My Nephews - They've Bulked Up, They've Got Stronger'
Football
16 hours ago
By Eoin Harrington
A Mad Night At The Euros Turned Into A Very Good Evening For England
Football
17 hours ago
By Donny Mahoney
Leon Goretzka With Pointed Goal Celebration Right In Front Of Hungarian Supporters