Former Republic of Ireland goalkeeper Emma Byrne is to be the first female inductee into the FAI Hall of Fame.

The Kildare native played 134 times for the Republic, from making her senior debut in 1996, before retiring in 2017, captaining the side during the final four years of her tenure between the sticks.

The record appearance holder for the Republic of Ireland women's side enjoyed a sensational career with Arsenal, winning every trophy that was available during her time in North London. Byrne's position as Arsenal number one helped raise the profile of women's football in Ireland in the first few years of the 21st century. 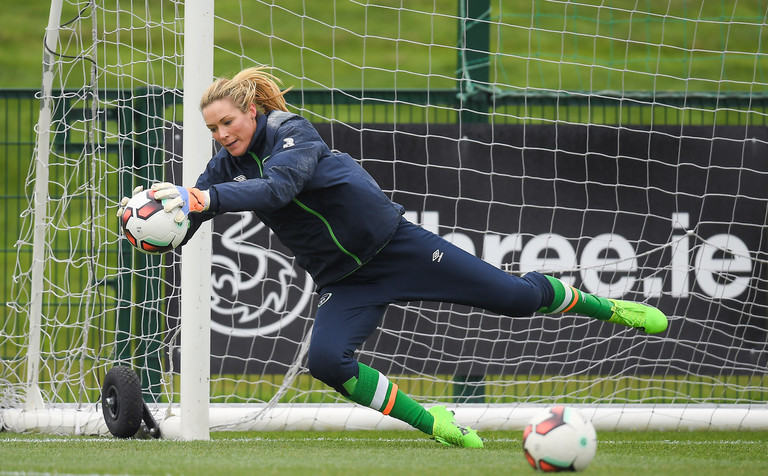 The FAI recently dedicated a tribute alcove to Byrne at their headquarters on the grounds of the National Sports Campus.

Speaking on the announcement FAI Board Member & Chairperson of the Women's Football Committee, Niamh O'Donoghue said:

From the time that she first burst onto the underage international stage at age 14, Emma was a fantastic servant to the women's game, representing her country at every age level and winning multiple honours at club level.

She was a tremendous role model for young girls around the country and I've no doubt that she inspired an entire generation of girls to follow their dreams of becoming a professional footballer.

The tribute alcove in FAI Headquarters is fantastic to see and anyone who visits the offices will be able to see just what she achieved. However, becoming the first women's player to be inducted into the Hall of Fame is historic and well deserved.

To pull on the Ireland jersey is a special thing, but to do it on 134 occasions is quite remarkable. Emma has earned her right to be described as an Irish legend.

Emma was a fantastic goalkeeper and ambassador for the women's game. She deserves to have her name in the Hall of Fame, alongside some of the best players ever to represent Ireland.

Byrne has previously taken on the FAI in the past, over the lack of services offered to the women's team, leading a player revolt in April 2017.

The dispute was ultimately settled with the players securing all their demands, and in the process, improving working conditions for female players in the national side. Only four months later, Byrne would call time on her 21-year career.

Byrne will be officially inducted into the Hall of Fame at the 3 FAI International Awards ceremony on Sunday, March 17. The programme will be broadcast live on RTE2 from 8.30pm.