"I Didn't Have The Hunger Or Determination To Be A Footballer At The Highest Level."

Tales of redemption in football are few and far between. It is a sport that rarely offers second chances, one littered with tales of those who failed to make the grade. That is especially true when it comes to young Irish players who make the trip to play professionally in England.

How many times has a top young Irish prospect moved to English football, only to chewed up and spit out by the cutthroat business of professional sport? Very few manage to recover from this crippling disappointment to re-emerge as stronger players and better people.

Enda Stevens is an exception.

Stevens moved to Aston Villa as a bright-eyed 21-year old in January of 2012, ready to take the world by storm. After earning a move from Shamrock Rovers to the Premier League, he had made it is a footballer. Or so he thought.

A couple of injuries to regular starters offered Stevens a pathway into the Villa first team, he made his full league debut against Manchester United in November of that year. It was a baptism of fire for the young left back, as his side gave up a 2-0 half time lead to fall to a 3-2 defeat. It hardly got any easier the following week, as they suffered a heavy 5-0 defeat at Manchester City. Still, the youngster had his foot in the door.

It wasn't to last. Injuries took hold, and he soon dropped out of first team contention. Loan moves to the likes of Northampton Town and Doncaster Rovers followed over the next couple of years, and it soon became apparent to the Dubliner that he had not yet 'made it' in England. 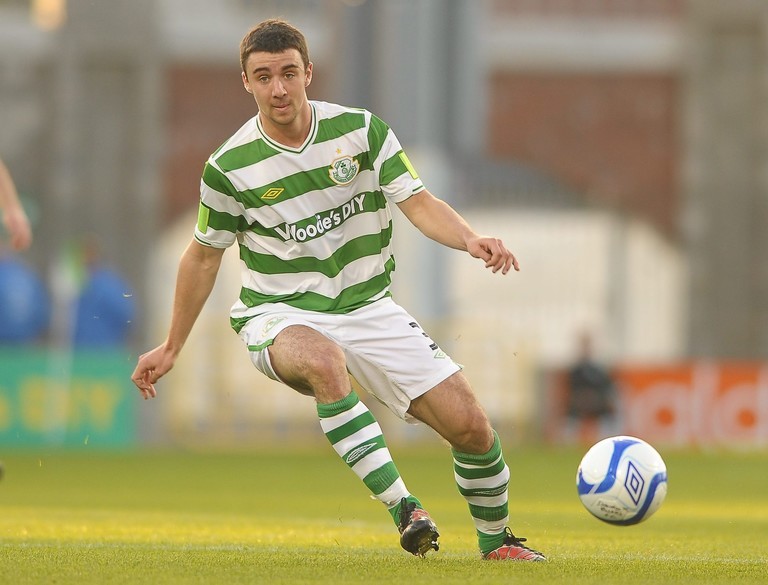 Speaking to Balls.ie, Stevens admitted that looking back now, he puts much of the blame on himself.

It was probably something that I didn't realise until I came away from it and looked back. That was more so when I realised how hard it is and how hard you have to work to be at the top of the game.

Unfortunately I didn’t really recognise that. I didn't have the hunger or determination to be a footballer at the highest level...

I never really realised that when I was on loan. I was still kind of playing in a comfort zone. You know you are still going back to Aston Villa, and there’s nothing there for you at the end of the loan move.

Don't get me wrong, I had a great time at the likes of Doncaster, but I didn't really take it as seriously as I should have. I wasn't professional, I wasn't playing to the best of my ability I’ll put it that way.

It soon became apparent that he was quickly losing a grip on his status as a Premier League footballer. With the expiration of his contract at Villa quickly looming, his place as a professional footballer was looking uncertain.

Eventually, a move to Portsmouth in League Two would materialise in the summer of 2015. For Stevens, it was the final roll of the dice:

You feel like it’s your last chance. If it doesn't work out there, you don't know where you're going to be. Luckily I had a manager like Paul Cook and there was good things going there. He got together a good team and he had us playing the right football.

While it may have been difficult to accept a move down the English football pyramid, it was the best thing that could have happened to Stevens. Playing under former Sligo Rovers boss Paul Cook, his form soon started to resurface. After a couple of seasons of regression, Enda Stevens' career was moving in the right direction once again.

So what changed? Much of it comes down to having a manager that took the time to help his players improve, something that Stevens had missed out on since moving across the Irish Sea.

It was probably the first time I was coached since I made the move across. My coaching kind of stopped when I moved to England as a footballer.

I don't think you should ever stop being told how to play the game, and I kind of stopped learning it when I moved to Villa. But Paul Cook got us back to playing in a way where you're learning, it was an attacking way and it kind of benefitted me.

Personal growth was matched with team success. The left back was named in the League Two team of the season for the 2016/17 campaign. Meanwhile, after years of seeing their club slowly drop into the abyss, Portsmouth fans were rewarded with a league title.

They were on the up, and so was Stevens. It wasn't long before recently crowned League One champions Sheffield United came calling, and the defender was on his way to The Championship. Only a couple of years prior, it was something he thought he would never have the opportunity to do. 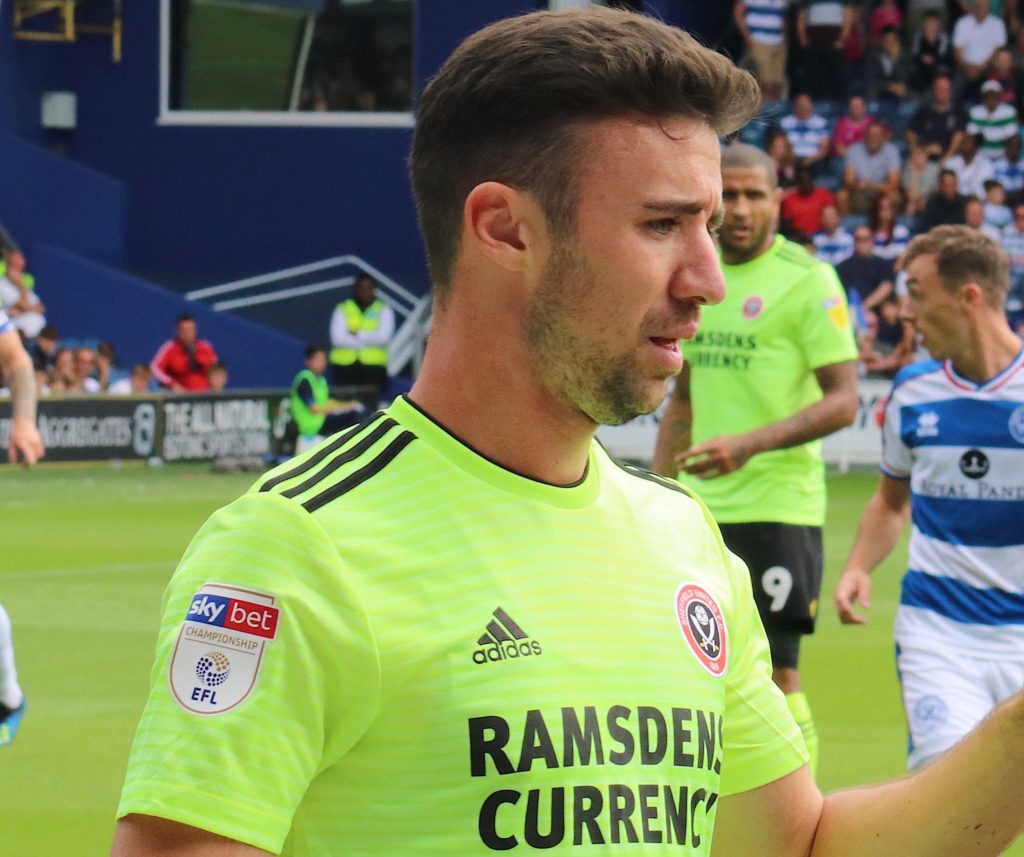 A little bit of doubt probably came over me when I signed with Portsmouth at the start, but once I found my feet down there and started playing, I kind of regretted that I hadn’t started doing what I was doing at Portsmouth two or three years earlier.

I wouldn't say that I would have been in that situation if I had met a Paul Cook two or three years prior. But it is what it is. Everyone deserves to be where they are in the game.

I had to go down and spend two years there, had a great two seasons, and then obviously my confidence was back, my hunger and desire for the game was back. I then took to Sheffield United.

Despite being the new boys in the division, under Chris Wilder Sheffield United played some of the best football in the English second-tier last season. For a while, they looked like they could secure back-to-back promotions. That faded as the campaign went on, as the realities of life in The Championship took hold.

This season, there have been no such issues. As we enter the home stretch of the campaign, The Blades are in the thick of the automatic promotion race. While the way things finished up last season still hurts, it has driven the side to new heights this year. Another year older, another year wiser.

Great away performance from the boys. Travelling fans ?

The Championship is such a tough league that it’s going to take a good squad to get you promoted, and we have that this season. I don't think we had that last year. We struggled with injuries players playing different positions. But this year we are a lot stronger...

We have that experience now, but we also have the hunger and determination to go and succeed this season. That comes from the manager and the coaches. Our approach to every game is ‘can we win this game’, it’s nothing less...

"It’s all to play for, it’s basically in our hands.

"We’ve got a massive game on Saturday against Leeds, it’s going to be a tough game to go there because they're a strong team, and their home form is really strong. It’s up to us to go there and implement our game and get a result. Who knows, if we nick a win it’s in our hands, it’s down to us.

"We want to succeed this season, and there is no better way to do that than to push for the top two spots. We’re game for the run in, and hopefully we can succeed."

On a more personal level, a return to the Premier League would mean the completion of a remarkable chapter in his footballing story. Salvaging what once looked like a fleeting career, Enda Stevens would return to football's biggest stage. Now 28-years old, this time, he certainly won't take it for granted.

It would bring my career in full circle wouldn't it? To be honest, it’s something that I didn't really see happening for a while.

But now that it’s here, I can't wait to see the challenge through and we will do all we can in the last few games to bring a club like Sheffield back to the Premier League. It would be some going.

With his club career back on track, forging a path with the Republic of Ireland is next on his list.

Part two of our interview with Enda Stevens, focusing on Ireland and the upcoming Euro 2020 Qualifying campaign, will be available next week.