Given the general warmth shown towards this England squad from their own fans during their run to the third place playoff, today should really have been a pressure-free run out with some of the squad players getting some game time and the fans giving the players a nice send-off. Even better if they could have closed it out with a win for third place to send the fans back to Blighty with something to cheer about. Well unfortunately for them that didn't happen.

Unfortunately for Phil Jones (one of the aforementioned squad players getting some game time) this pressure-free run out involved trying to handle a free-flowing Eden Hazard. The same Eden Hazard who rinsed him badly during the FA Cup Final in May to win a penalty that decided the game.

In that incident Jones performed a medley of his greatest hits including poor positioning, slow reactions, a desperate chase towards his own goal topped off with an unconventional technique of tackle while making a weird, meme-friendly facial expression. 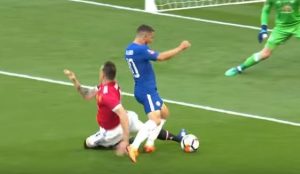 In today's game against Belgium, Jones met his old tormentor again and was caught out for Belgium's second goal. Here he positioned himself too deep to allow Hazard to stay onside and then awkwardly twisted his body in such a way he was unable to cut out de Bruyne's through ball. Hazard glided past him and put the game to bed with a cool finish.

In the ITV studio, Gary Neville and Roy Keane were critical of Jones' errors which have been all too regular for a player now 26 years old. He is yet to perform at a consistent level for club and country and is still seemingly living off the 'potential' tag that enticed Manchester United to spend over £16 million pounds on him more than seven years ago, when spending that type of money on a teenager was not to be sniffed at.

Despite the goodwill extended to this squad by the English support and the meaningless nature of what was essentially an exhibition match, fans on Twitter were quick to share their analysis of Jones' performance and their opinions on his place in the squad.

Selling Phil Jones would be like a new signing for Manchester United.

We should know by now that putting Phil Jones against Eden Hazard is a worse idea than invading Russia in the winter.

Phil Jones just about back with us after being bamboozled by Hazard earlier 😕⚠️#BELENG pic.twitter.com/Jw5tv9COiW