It's not news to anyone who's been following the career of James McClean that he's been the subject of plenty of abuse and threats in his time playing football in England. The Republic of Ireland and Stoke winger has long attracted the ire of a particular kind of footballing neanderthal that just tend to be rubbed up the wrong way by the Derry man. While in general he has taken it in his stride, there are times when the constant and serious nature of the abuse has become too much.

Last year, McClean spoke out about the lack of support he has gotten from the media, and even teammates, over the years.

Have I ever had my abuse condemned by the media (Sky Sports, TalkSport, Newspapers)? No! In fact, quite the opposite. The slightest thing that I do that might cause offence to anyone is highlighted by them.

I have seen some of my fellow Irish teammates post a black square in support of anti-racism as well as post(s) condemning the discrimination, and AGAIN rightly so!

Have I ever seen any of them ever post a public condemnation of the discrimination I get, which funnily enough is a discrimination against them also? That would be a no!

Over the weekend, McClean was on the receiving end of yet more despicable and frightening abuse, with one message even threatening to burn down his house with everyone inside.

The FAI and PFA have condemned the messages and have both offered support to the McCleans.

The sectarian abuse that @stokecity winger, James McClean, received over the weekend on social media is totally unacceptable. No player should have to face abuse based on their race, religion or nationality. We stand with all players against discrimination. pic.twitter.com/RTxa3ZhLGo

Last night, James's wife Erin spoke out on social media with a powerful letter outlining the nine years of abuse and threats James and their family have endured, and the lack of support from the media in reporting on it. She made it very clear that was happened at the weekend was far from an isolated incident. The couple have three young children, and Erin's description of James getting abuse while out shopping with the entire family is extremely disturbing.

She also outlines threats against James, her, and her children, even recounting a time when somebody told James he was bringing a gun to a certain match, and watching the particular game in terror.

One of the biggest points of contention with McClean is his annual refusal to wear a poppy. Erin's letter points to the fact that the media will consistently soften reports of abuse for James by mentioning that particular point, which, she implies, gives a justification for the behaviour, and stands him out as someone the reader or viewer should dislike.

McClean has refused to wear a poppy ever since they peculiarly started to get sewn into English football teams' jerseys in the buildup to Remembrance Sunday back in 2012.

Watching him deal with this his entire career, so just having my say after 9 years of constant abuse. pic.twitter.com/5nEyujhpZw

I've always kept relatively quiet about the abuse that james, myself & the family receive because I don't like giving people the platform and it has become part of our daily lives this last 9 years.

There isn't a day goes by that either one of us don't receive a message of some sort, whether it be a threat, or else telling us to get the f*ck out of England. And to be honest it's gotten to the point now where it doesn't affect us one bit, and hasn't for a long time! However, we have 3 very young children who are now at an age where they know and understand these things being said. Of course we have tried as hard as possible to keep them away from it all but there has been times we are out shopping and there is people making remarks towards james in front of the kids.

We can take the name calling and the rest but what we cannot accept is threatening our family home and our children's lives. They don't deserve this. Why after 9 years of constant abuse should it be ok and have to accept receiving these threats constantly. People ask me how do you deal with it and I always say ah we're well used to that now but why should we be? Why should we have to read messages like that daily for almost a decade.

We've been spat at, shouted at, nights out have been ruined by people making remarks towards him. I even remember once someone threatened him saying they were taking a gun with them to a certain match and I can still remember watching that match in absolute fear on the tv.

Every single day I'm online I'm seeing support of those who have been abused online by the big media outlets and rightly so. No one should be able to sit at a computer or phone and type these messages without some form of consequence. Who actually even does this?! After this long that's something I often wonder..

But for James it always seems the media (except a select few) shy away from speaking up for him when he's done anything.

Every single article over the years that's been written about James (whether good or bad) has ALWAYS brought the poppy into it. He may have just given to a charity but they always make sure to mention 'it's that one who doesn't wear the poppy.' It was almost 10 years ago. The media can certainly control public opinion.

People may  say things like he brings it on himself and he doesn't help himself, but he has only ever done something to react to the abuse he has received first. Imagine having to take the abuse constantly and never getting the help or guidance in how to deal with it? He has been punished each time he has reacted and he has accepted that.

People may not like him and that's completely fine you do not need to like someone, but sending messages about his kids and family, yet he's not allowed to react? Unfair.

James is truly a good person, he loves nothing more than chilling at home with the kids. He can react to situations for sure but he never initiates them. Many don't understand his beliefs and that is completely fine we don't expect you to understand but those people who judge him for that do not know or try understand where we grew up and the history of our city. If they did they would see past his decision and judge him solely on his football.

But the internet these days is a scary place and anyone can write a threat to someone, my concern is if only one of those people throughout the years really meant it. What happened to being kind? It only works when it suits a specific narrative. Some people can only take so much abuse given towards them and so many unnecessary and tragic things have happened in recent years from people on the receiving end.

We're lucky we can see past it and we have some of the best support from family, friends and strangers.

Since the latter was published last night, the McCleans have received messages of support from a number of quarters.

You and James and your lovely family don’t deserve this abuse because that is what it is. You have handled this appalling situation with grace and dignity and hopefully now people will stop and think. Best wishes to you all.

I’m actually lost for words looking at James McClean’s Instagram. The amount of death threats & abuse he receives daily is shocking & yet it’s never mentioned anywhere by any media outlet. When will it stop? And when will these people be held responsible? This isn’t acceptable!

Have huge respect for James McClean.

Easy for a footballer to be silent but he’s determined to expose prejudice & hatred.

You don’t have to agree with his politics to appreciate his integrity.

UK authorities need to tackle hate speech & we have to do the same in Ireland.
🇮🇪 https://t.co/Epqb4e6R3W

We stand with James McClean and his family.

All because he wrote a very eloquent letter explaining reasons for not wearing a poppy. I like most Irish players over the years would chose not to wear one but out of respect to club and supporters just went with it.. Sectarianism not mentioned in same breath as BLM movement 1/2 https://t.co/c71n2uMftf

Yet James has constantly outlined the lack of support from authorities over the years. I’ve heard and seen it at games yet he’s handled it all with dignity and consistently showed his strong character by just getting on with things. Enough is enough now.. Total disgrace. https://t.co/c71n2uMftf

SEE ALSO: The Lansdowne Road Riot - Reliving One Of The Most Infamous Nights In Irish Sport 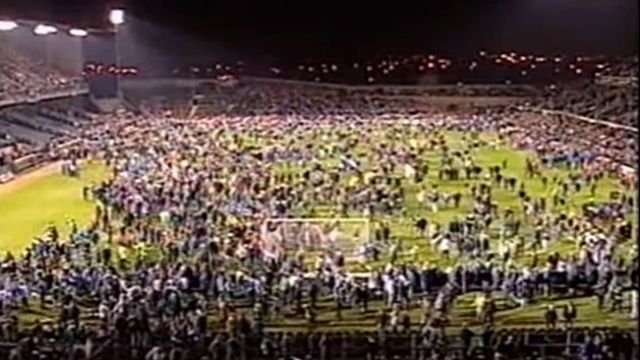 Football
5 days ago
By Gary Connaughton
James McClean Adds To Kenny's Injury Woes Ahead Of March Qualifiers
Football
2 weeks ago
By PJ Browne
'He Looks 13 Or 14, To Have That Anger And Hatred Is Mind-Blowing'
37