A very funny post-match Erling Haaland interview has been doing the rounds today, following his side Dortmund side's 3-0 away win over Club Brugge in the Champion League on Wednesday night.

Haaland's interview featured on CBS Sports, and it's fair to say it left Kate Abdo and her panel flabbergasted.

For the most part it was just a little awkward, with the broken English and Haaland well known for his short answers in interviews, but then things took a seemingly very strange turn, when the interviewer asked: "Are you going to sleep lonely tonight?"

He then followed that question with "You're not taking a girlfriend at home right now. You didn't score a hat-trick." A very straight-faced Haaland replied "Didn't score, no" and the world's most painful five seconds was brought to an end with an "OK, that was it. Thank you very much."

Back in the CBS studio, Jamie Carragher exclaimed "Oh, Jesus Christ!" "I didn't know where that was going, to honest," said Micah Richards, with Carragher adding "I thought we were all getting sacked!"

To be fair, the question wasn't as absolutely nuts as it sounded. Presumably the interviewer was giving a nod to previous comments Haaland made about how he slept next to the hat-trick match balls he earned at Red Bull Salzburg.

In an interview last year, with Dagbladet , he called the balls his "girlfriends."  So, in a weird way, the interviewer's comments made perfect sense. Although, we're not sure what the actual question was meant to be. 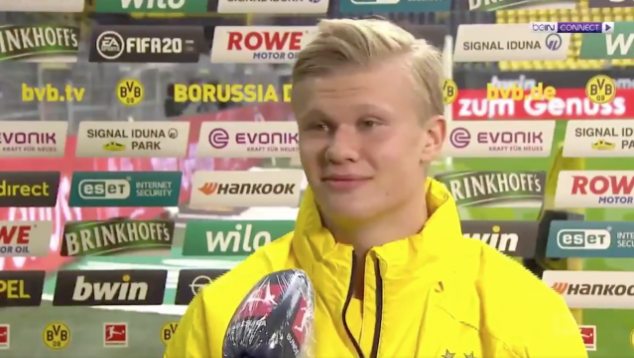