Uefa's Opinion Of Us Hasn't Changed At All From Euro 2012

Uefa have released their extensive, 100-page technical report on Euro 2016, and to be fair to them, it is exceptionally detailed and interesting.

They've reviewed each game of the tournament from a tactical point of view, pointing out the different systems used by each manager in games, also deducing the main tactical trends to emerge from the tournament.

The report is put together by a team of Uefa technical experts. The panel featured Packie Bonner, and was headed up by Alex Ferguson.

It's fantastic, and you can access the whole thing on PDF here.

In all, only Northern Ireland (28% of their total attempted passes) and Iceland (22%) played more long balls than we did.

We are going to compare this year's stats to our numbers from Euro 2012. (That report can be read here).

Uefa's opinion of us

Having analysed each side's performance, UEFA collated the data to give a number for characteristics of each team. Here's what they made of Ireland.

The 'outstanding work ethic, team spirit, never-say-die attitude' reads like they rolled off the tongue of an opposition manager asked about the challenge of Ireland ahead of an international game. All they are missing is a good word about the fans.

Compare this to their list of our key features from Euro 2012. Very little has changed, other than the fact Uefa have got the thesaurus out: 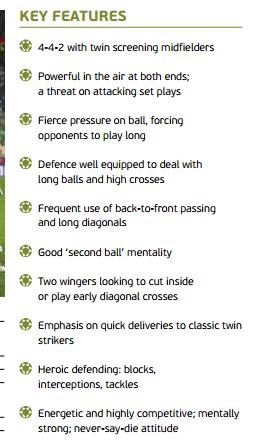 This year, Uefa totted up our most frequent pass combinations. They didn't do this for Euro 2012.

At Euro 2012, we actually played a lower percentage of long balls (19%) and we had a slightly higher percentage of short passes (25%). Medium accounted for 56% of our total four years ago.

Here are our passing stats from each game at Euro 2016:

Compare this to the figures from four years ago:

Our average possession increased slightly under Martin O'Neill. Intriguingly, we attempted more than 200 extra passes against Croatia in the opening game of the Euros than we did against Sweden. Also noticeable is the massive drop off in terms of distance covered: in total, Ireland covered less ground at Euro 2016 than anybody else.

Elsewhere, Uefa's main findings from the tournament were the following:

Games were based around attack vs defence to a larger extent than ever before.

4-2-3-1 remained the most popular formation.

The number of goals scored from counter attacks has decreased significantly.

A number of teams sat very deep, leading to an increase in the number of crosses made, along with long balls played by goalkeepers.

See Also: The Big Interview: Richard Dunne On How Man City Has Lost Its Soul

Football
6 months ago
By Sean Meehan
Quiz: Name Each Member Of Ireland's Major Tournament Squads
Football
3 years ago
By Daniel Kelly
Leo Varadkar Has Forgotten He Attended Ireland's 4-0 Hammering To Spain At Euro 2012
Football
3 years ago
By Gavan Casey
Keith Andrews Gives Extremely Revealing Explanation As To What Went Wrong At Euro 2012
Popular on Balls
GAA
22 hours ago
By Balls Team
Remembering Marty Morrissey's Pre-Match All-Ireland Commentary That Had Us In Tears
3