The Republic of Ireland may be 180 minutes away from a spot at Euro 2020, but they now know - should they make it there - that they will face Spain, Poland and Sweden in Group E.

Mick McCarthy's side already knew they would have two games at home provided they get through their upcoming play-off games, but they also knew they were going to have to travel to Bilbao to play Spain. This evening's draw, however, revealed they would not have to face that journey until the final game of their group.

If they get to the tournament, they will begin their campaign on June 15 against Poland before returning to Ballsbridge on June 19 to face Sweden. The final game of the group takes place at San Mamés in Bilbao.

Going into the draw in Bucharest, McCarthy already knew his side would be drawn in Group E, alongside top seeds Spain and a number of other possible high-profile sides including France and Croatia, last year's World Cup finalists. But the Irish received a a slice of luck avoiding a group of death. 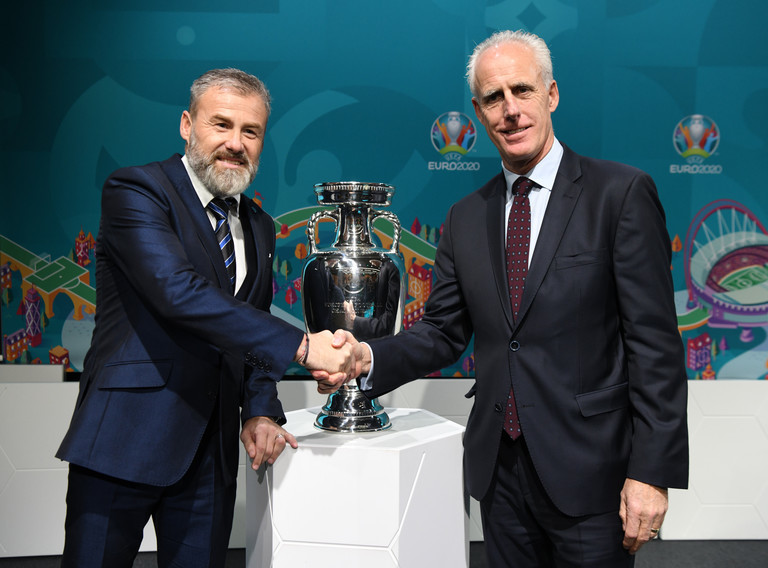 But before the national side begin to even think about their first game of the tournament against Poland on June 15, they must qualify. The first obstacle on that road will be away to Slovakia next March. Should they win there, they will be travelling away once again to play either Northern Ireland in Windsor Park or Bosnia and Herzegovina, who they beat in the play-offs to reach Euro 2016.

Only then will they enjoy home comforts back in Dublin next summer.

Football
4 days ago
By Gary Connaughton
UEFA Received Record Number Of Ticket Applications For Euro 2020
Football
2 months ago
By Sean Meehan
Ireland Face An Away Play-Off Final In Belfast Or Bosnia To Qualify For EURO 2020
Football
2 months ago
By Balls Team
Where To Watch Wales Vs Hungary? Irish TV Details For Euro 2020 Qualifier
Popular on Balls
GAA
21 hours ago
By Balls Team
Deividas Uosis Becomes Latest Kerryman To Make AFL Move
1