The Merseyside Derby got off to a typically lively start on Wednesday evening - and the Everton fans were so disappointed with their team's start to the game that sections of the crowd left as the Toffees went 2-0 down inside the first twenty minutes.

Sections of Everton fans leave after 20 minutes of Merseyside derby

The clash between Everton and Liverpool is always a lively one, with the fierce rivalry behind the game bringing a reputation for flying challenges, bad tempers, and friction among the fans.

The opening to Wednesday's game was, in classic fashion, hectic, with remarkably open play leading to chance after chance at either end. It was Liverpool who capitalised first, with a neat curled finish from Jordan Henderson.

Incredible composure and a classy curling finish into the far corner 👏 pic.twitter.com/m8oMu4NnUZ

When Mo Salah scored just ten minutes later to put Liverpool 2-0 up at Goodison Park, some Everton fans had had enough. Broadcast cameras picked up sections of supporters filing out of the stadium after less than 20 minutes had been played.

The main feed also picked up the deafening silence around the home sections at Goodison - broken only by the cheers of Liverpool fans, and isolated boos around the ground.

This is the best thing you can see today
Everton fans 😂😂

Liverpool's supporters naturally played up to the occasion, as they taunted the Everton legion with chants for their former manager Rafael Benitez - currently presiding over a tricky situation in the blue dugout on Merseyside.

It's been a poor few months for Everton, who haven't won a game in the Premier League since September's triumph over Norwich. Their fans also gave the team a hostile reception after they fell to a 1-0 defeat to Brentford on Sunday.

Their fixtures don't get much easier from here on out either, with games against Arsenal, Crystal Palace, and Chelsea to come in the next two weeks.

They managed to snatch a goal back late in the second-half through Demarai Gray - though many of their fans were already on their way home when that goal went in. 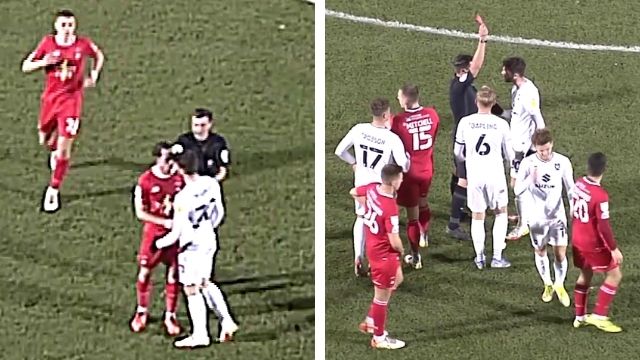