The Governance Review Group, a joint effort of Sport Ireland and the Football Association of Ireland, published its report into FAI today, Friday the 21st of June.

In total, the 129-page report has made 78 recommendations in order to improve the governance of football in Ireland following the departure of former chief executive John Delaney.

A five-person team conducted the review over an eight-week period,

The report suggests the use of an interim board for the next year while the current issues at the association are resolved, with a new board appointed at the FAI AGM in July 2020.

Four independent directors, including the chairperson, should be appointed to the board while the FAI council, which selects the board, should be expanded in order to give more of a voice to those involved at grassroots levels of the game. 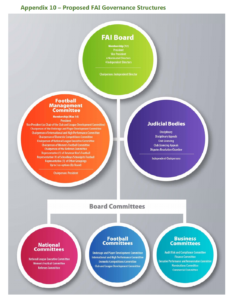 The FAI Governance Review also recommends that at a balance of gender be maintained on the board, with men and women each having at least one-third of the representatives on the board within two years, while a similar gender balance be achieved at council, committee and AGM level within three years.

Meanwhile, the roles of honorary secretary and honorary treasurer would be abolished under recommendation from the report.

The report recommends that all external funding be monitored and all funding agreements above a certain threshold be approved by the board, with the figure of €10,000 used as an example.

The FAI Governance Review will now be brought before 206 delegates at the assocation's AGM on July 27th in Trim, Co. Meath. It will require a two-thirds majority in order to pass.

You can read the full FAI Governance Review here.

Football
19 hours ago
By Gary Connaughton
Who Knew That Ireland Were Twice Crowned World Football Champions?
37