In January 2006, the League of Ireland voted to wind itself up (following the 2006 season) and cede control to the FAI. The vote followed the much ballyhooed "White Paper on the Strategic Direction of the eircom League" or Genesis II as it was commonly referred to by LOI fans. 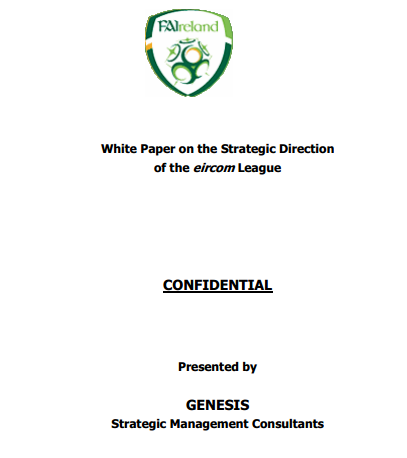 The paper quickly set out its view that the LOI was going nowhere and a major overhaul was needed.  It made a number of recommendations that it believed would transform Irish professional football.  Some of those were clearly pie-in-the-sky while others seemed sensible.

The FAI decided that they'd take over the running of the league. Their first idea was to make each club re-apply to join their new league.  Clubs would be ranked on the follow areas;

As you can see there is plenty of wishy-washy subjective criteria there and the plan quickly came under fire from League of Ireland fans. Licensing had been in place for several years and had already laid down minimum criteria for finances, stadiums and youth development.  The clubs voted to go with the FAI in January 2006.

The 2006 League of Ireland Premier Division was the first without Shamrock Rovers who had been relegated in 2005. They were beaten by Dublin City in a play off but that was to be the last good moment for Dublin City who folded and left the league in July. Their 2006 results were expunged meaning title chasing Derry City regained lost points in their battle with Shelbourne

The league title went to the final day with Shels beating Bohemians 2-1 to claim the league title on goal difference from Derry City. It was an emotional win for Shelbourne's players as speculation mounted about the club's finances.  It was widely reported that many of them hadn't been paid in weeks. Man of the Match Stuey Byrne responded memorably on RTE after the final whistle;

Shamrock Rovers won the First Division despite a 3 point deduction for fielding an ineligible player and now being run as a members club looked set for a return to the top division. Dundalk finished second and faced the bizarre prospect of a "promotion/relegation" play off with Waterford United (11th and last placed finisher in the Premier Division.  Dundalk duly won but with the spectre of the new league looming, most pundits queried the need for a play off at all.

The FAI's new league was decided by an Independent Assessment Group (IAG) which was supposed to allay fears of FAI bias.  Those fears were not allayed.  All clubs were to make presentations to the league which could take any form once sufficient documentation was provided.  Galway United, with the "Rogue Trader" Nick Leeson as CEO, made this video to go with their presentation;

After Dublin City's collapse mid-season, Shelbourne were next to face serious financial problems.  Rumours of players threatening strike over unpaid wages dogged the club for months.  Limerick FC, who hadn't played in the top league for over a decade, seemed to lurch from crisis to crisis.

The new Premier Division was made up of the top 10 finishers in 2006, 1st Division champions Shamrock Rovers and Galway United, 3rd place finisher in the First Division.  The clubs to miss out included Waterford United (11th in Premier) and Dundalk (2nd in First and winner of the "promotion" play off).

Waterford United were furious. Dundalk were really furious. The legend of Dundalk fan Maxi was born as he threatened to set himself alight at FAI headquarters. That linked Irish Independent report  includes this amazing line after Maxi was talked out of it;

Mr McAllister was later treated in the city's Eye and Ear Hospital for irritation to his eyes caused by the petrol.

Both clubs threatened legal action but eventually, reluctantly accepted the decision of the IAG.  Limerick FC were refused a licence and a new club, Limerick 37 (so called as 1937 saw the introduction of senior football to the city) was formed to take their place. Mick Wallace founded Wexford Youths and the league had its first club from the Model County.

In January the financial situation of  league champions Shelbourne worsened by the day.  Manager Pat Fenlon and their highly paid squad all departed and towards the end of the month, it looked like Shelbourne may fold. Finbarr Flood replaced the ill Ollie Byrne as Chairman and promised that Shelbourne would compete in all fronts.  They quickly pulled out of the Setanta Cup.

On the 19th of February Shelbourne's Premier Division licence was revoked as, amongst other things, they owed 17 players wages from 2006.  For the first time in league history the reigning champions would not be given the chance to defend their trophy.  Waterford United, as next placed team in the IAG standings, would take their place in the Premier Division.

Without a Premier licence, Shelbourne could not receive a UEFA licence.  That saw Derry City promoted to the Champions League with their place in the UEFA Cup going to beaten Cup finalists St Patrick's Athletic.

All clubs in the new league signed up to a Participation Agreement which gave the FAI greater control over league and club affairs. Despite promises of increased synergy and improved marketing and promotion, the league has carried on in pretty much the same fashion as before.  It quickly became clear that all those plans presented to the FAI/IAG were, at best, highly optimistic and several clubs hit financial troubles in the years following the new league's launch, ironically including Galway United who left the league in 2011 (to rejoin as Galway FC in 2014 and win promotion on the field!).

The League seems far more stable now but sparks of unrest have begun to appear from league clubs.  If the league is to embrace another structural change, let's hope no one ends up setting themselves on fire this time!

Football
1 day ago
By Jonathan Byrne
'Quite Frankly, You're In The Drop Zone!' - RTÉ Chief Defends LOI Coverage
Football
3 days ago
By Andrew Dempsey
Bohs v Derry City Last Night Was Beautiful Madness
Football
1 week ago
By John Dodge
All 30 Men Who Have Played In The League Of Ireland And Gone To The World Cup
Popular on Balls
Golf
8 minutes ago
By Jonathan Byrne
Sky's Ryder Cup Holograms Are Freaking People Out
GAA
30 minutes ago
By Donny Mahoney
Much Has Changed Since Jack O'Connor Last Managed Kerry
Golf
1 hour ago
By Jonathan Byrne
Bryson DeChambeau Hit One Of The Most Audacious Drives In Ryder Cup History
Golf
2 hours ago
By Eoin Harrington
Shane Lowry Made A Brilliant Start To His First Ryder Cup Round