Tuesday's Group I World Cup Qualifier will be remembered for all the wrong reasons after the conduct of a section of Albanian fans.

Poland came out 1-0 winners over Albania in Tirana in what was an important three points for both nations hopes of qualifying.

PAOK striker Karol Świderski scored the only goal of the game after 77 minutes but the reaction to the goal led to the game being suspended for over 20 minutes.

As the Poland players celebrated the goal, Świderski and his teammates were subject to bottles being thrown at them from the stands.

The World Cup Qualifying match between Albania and Poland was suspended after home fans threw missiles on to the pitch as the Poland players celebrated their goal. pic.twitter.com/nktg7Kpf6O

Albania vs Poland is currently on pause

Slews of plastic containers lined the pitch, leaving the players with no choice but to leave the game and wait for the home fans to settle.

According to the BBC, Poland midfielder Piotr Zielinski was the target of another object flung from the crowd. Disgraceful conduct from the Albanian fans.

The Poland players then tried to protect themselves in a huddle near the half-way line. After more than twenty minutes, the game resumed.

The bottle-throwing didn't stop there, however, as goal scorer Świderski had bottles thrown at him again in the post-match interview. He was then told to leave the grounds.

Swiderski can’t even do a interview because Albania fans are throwing stuff at him. Disgraceful

Poland captain Robert Lewandowski after the game said, "After the goal there were full bottles flying in, so it was a bit dangerous, but we came back and finished the game."

Both countries were once part of the Soviet Bloc, but relations between the two countries have grown since the fall of communism in 1989 with diplomatic exercises.

Poland have an embassy in Tirana, where the game was played, and Polish residents are frequent visitors to Albania as a tourist destination.

Before the game, a video emerged of a certain portion of Albanians attacking Polish fans on their way to the match.

WC Qualification. 12.10.2021
Albania - Poland.
Before the game, Albanians attack around 10 Polish fans near the stadium.#ALBPOL

FIFA will likely carry out an investigation into the incidents inside and outside the stadium, with sanctions likely for the Albanian fans' conduct.

The match was an important one for World Cup qualifying for both teams, as Poland now find themselves taking Albania's second spot in Group I.

England lead the group on 20 points after their draw with Hungary on Tuesday night, with Poland only three points behind.

See Also: Stephen Kenny Sums Up How Much Jeff Hendrick Has Improved For Ireland 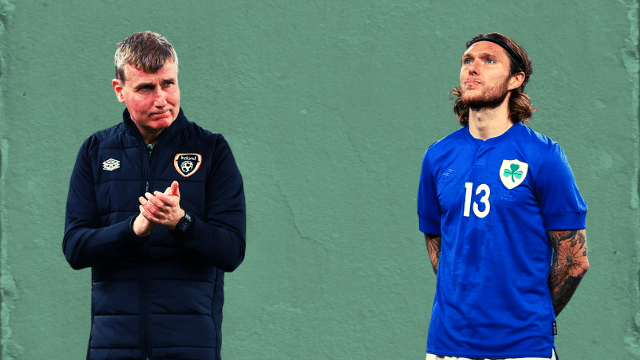 Football
1 hour ago
By Gary Connaughton
Joshua King Aims Digs At Everton After Bagging Hat-Trick Against Former Club
Football
3 hours ago
By Donny Mahoney
Scottish Football Twitter Reacts To 'Yes Sir, I Can Boogie' At Dalymount
Football
3 hours ago
By Eoin Harrington
Mick McCarthy Parts Ways With Cardiff City After Dire Run Of Form
Previous Next