"That's how people learn," he added. "But you've got to be willing to learn, that's the problem." Ferdinand has been a part of BT Sport's Hope United organisation, campaigning against online abuse.

Ferdinand is of the belief that England shouldn't host a major tournament until they sort out the major social issues arising from this year's event.

"A lot of people who shout obscenities and things like that, they will never know what it's like to be racially abused, racially profiled, but what they can do is try to understand it," he said.

"We're in a different generation now, what we're seeing is a multi-cultural stance. It's no longer just ethnic minorities speaking about this. So it's time for these bigots and these uneducated fools to get in tune with today's society."

What do I see?? I see bravery, I see courage, I see 3 kings ❤️ @MarcusRashford @BukayoSaka87 @Sanchooo10 pic.twitter.com/sC9pOjOTOs

Ferdinand came out in support of England manager Gareth Southgate as a template for those to learn about the handling of racial issues from an outside perspective.

The English FA are carrying out an investigation into the aftermath of Sunday's Euro 2020 final. Over 80 fans were arrested for disruption outside Wembley Stadium in London.

English FA Ceo Mark Bullingham has differed from Ferdinand's point of view on hosting future events, but is aligned in condemning racist behaviour and slurs.

"It's appalling," Bullingham said, "and it's unbelievable when you've had a team that's tried so hard and given so much and done their best for their country."

"These companies need to act, they need to take responsibility for what's being posted on their sites and they need to deal with it. We think they can."

See Also: Marcus Rashford Shouldn't Have Be A Good Guy To Expect Not To Be Racially Abused 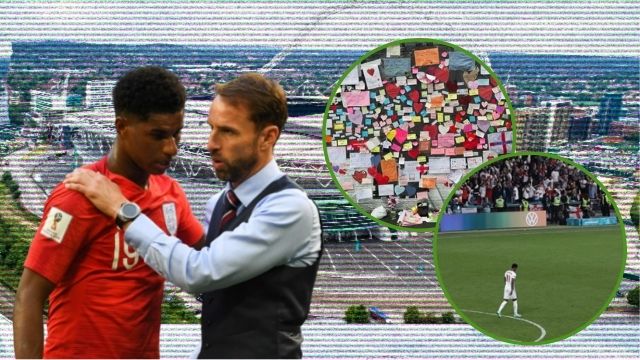 Football
51 minutes ago
By Gary Connaughton
Joshua King Aims Digs At Everton After Bagging Hat-Trick Against Former Club
Football
2 hours ago
By Donny Mahoney
Scottish Football Twitter Reacts To 'Yes Sir, I Can Boogie' At Dalymount
Football
2 hours ago
By Eoin Harrington
Mick McCarthy Parts Ways With Cardiff City After Dire Run Of Form
Previous Next