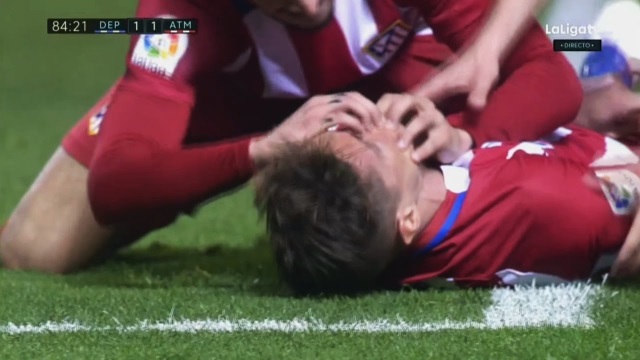 Late in the game between Atletico Madrid and Deportivo on Thursday night, Fernando Torres was involved in a clash with Alex Bergantinos.

Torres and the midfielder clashed heads with the striker hitting the pitch hard with his head on landing. Atletico manager Diego Simeone said afterwards that he was anxious for his player during the game. He and his staff heard the clash from the bench and were worried about a possible neck injury.

Torres was taken to hospital where he underwent scans and was said to he suffered no traumatic injuries. Atletico stated last night that the player was 'conscious and lucid'. He later posted a message to Twitter thanking fans for their messages and added that he hoped to return to action soon.

Spanish media reported last night that Torres was visited at the Modelo Hospital by Alex Bergantinos. Torres told the 31-year-old to be 'calm' about the situation.

He is very well and happy. They have told him how he is and he has understood perfectly.

He told me to be calm and that these things happen.

He told me that something like this happened years ago.

He was calm and even smiling. He remembers an occasion he had and other things, but he does not remember anything about our collision.

Dr Carlos Larino, who treated Torres, had plenty of praise for the reactions of teammates Gabi and Sime Vrsaljko.

Gabi even took a bite from Fernando when opening his mouth. What he and Vrsaljko did was perfect.

Football
1 day ago
By Gary Connaughton
Watch: Rangers' Kemar Roofe Strike From Own Half May Be A Puskas Winner
1