Five Great Writers On The Genius And Tragedy Of Maradona

There is no shortage of writing on Maradona out on the internet. It's no surprise. Genius, fame, crime, the inherent inequality of capitalism: so many tantalising narrative threads converge in the life of Diego Maradona. the A day spent reading only Maradona obituaries would not be misspent. If you're looking for a starting point in your longform Maradona reading, here are five great writers giving their thoughts on Maradona's life and times.

Eduardo Galleano on Maradona's fall after the 1994 World Cup

'Diego Armando Maradona never used stimulants before matches to stretch the limits of his body. It is true that he was into cocaine, but only at sad parties where he wanted to forget or be forgotten because he was cornered by glory and could not live without the fame that would not allow him to live in peace. He played better than anyone else in spite of the cocaine, not because of it.

'He was overwhelmed by the weight of his own personality. Ever since that day long ago when fans first chanted his name, his spinal column caused him grief. Maradona carried a burden named Maradona that bent his back out of shape. The body as metaphor: his legs ached, he couldn’t sleep without pills. It did not take him long to realize it was impossible to live with the responsibility of being a god on the field, but from the beginning he knew that stopping was out of the question. “I need them to need me,” he confessed after many years of living under the tyrannical halo of superhuman performance, swollen with cortisone and analgesics and praise, harassed by the demands of his devotees and by the hatred of those he offended.

'The pleasure of demolishing idols is directly proportional to the need to erect them. In Spain, when Goicoechea hit him from behind — even though he didn’t have the ball — and sidelined him for several months, some fanatics carried the author of this premeditated homicide on their shoulders. And all over the world plenty of people were ready to celebrate the fall of that arrogant interloper, that parvenu fugitive from hunger, that greaser who had the insolent audacity to swagger and boast.

'Later on in Naples, Maradona was Santa Maradonna, and the patron saint San Gennaro became San Gennarmando. In the streets they sold pictures of this divinity in shorts illuminated by the halo of the Virgin or wrapped in the sacred mantle of the saint who bleeds every six months. And they even sold coffins for the clubs of northern Italy and tiny bottles filled with the tears of Silvio Berlusconi. Kids and dogs wore Maradona wigs. Somebody placed a ball under the foot of the statue of Dante, and in the famous fountain Triton wore the blue shirt of Napoli. It had been more than half a century since this city, condemned to suffer the furies of Vesuvius and eternal defeat on the soccer field, had last won a championship, and thanks to Maradona the dark south finally managed to humiliate the white north that scorned it. In the stadiums of Italy and all Europe, Napoli kept on winning, cup after cup, and each goal constituted a desecration of the established order and a revenge against history. In Milan they hated the man responsible for this affront by the uppity poor: they called him “ham with curls.” And not only in Milan: at the 1990 World Cup most of the spectators punished Maradona with furious whistles every time he touched the ball, and celebrated Argentina’s defeat by Germany as a victory for Italy.'

from Football In The Sun And Shadow(1995)

More Galleano on Maradona for the Spanish speakers:

Hugh McIlvanney on Maradona over Messi

McIlvanney has done plenty of great writing on Maradona  (pick up McIlvanney On Football to read more). But this tribute to Pele from 2018 also features a stirring tribute to the greatness of Maradona (even if McIlvanney ultimately opts for Pele)

Maradona’s twilight is also a story about the proud, beautiful but battered city of Naples, where life is ‘agrodolce’, bittersweet; a city which craved a Messiah, and found one in Maradona. There is no Italian word for ‘privacy’, and in Naples there is no privacy. There is instead a strange dichotomy: much of the life of the urban sprawl under the volcano is lived in the shadows, but there is no hiding place. The poor quarters that Maradona made his own, the Spanish Quarter, the Forcella, the Sanita and the ‘Spaccanapoli’ - where his painted portrait adorns the gable ends and where a generation of children have been christened Diego Armando - are a warren of little alleyways, steps and courtyards from which the great domes and facades of tatty baroque churches rise like cloudcaps and cliffs out of the miasma of old stone propped up by scaffolding. ‘Everyone sees everything here,’ muses Adele, who keeps a magic shop in the Sanita quarter.

Naples is the last great pagan city, a city of dolls, puppets, cards, magic and the significance of numbers (with which the Neapolitans interpret dreams). Along and off the Spaccanapoli, wart-faced marionettes hang from their strings; devils and pulcinella harlequins stare impiously from the shop windows, alongside the Holy Virgins with their halos of neon. Naples has a bright face, but it lives under the volcano and on top of a fault line; the city is ridden with an apocalyptic cult of death. When Maradona’s Napoli won their first-ever championship in 1987, someone wrote on the walls of the cemetery: ‘You don’t know what you missed.’ A day later came the reply: ‘Don’t be so sure we missed it.’

From Diego Maradona: Flight of the Enchanter (1991)

'Many sportsmen claim to be champions of the people, but Maradona's populism is underwritten by his itinerary - the proletarian strongholds of Buenos Aires, Naples, and now Havana (and the only French club he flirted with, indicatively, was Marseille). In BA, if you ask around, the response to Diego is always thoughtful, always sympathetic; and the Havanans, who have never known a non-decadent Maradona, seem to be unreserved worshippers ("I am Maradona fanatic"). Cuba is perfect for him; he can be a man of the people and a man of the president, hobnobbing with that other world-class scapegrace, Fidel Castro'

SEE ALSO: Still Bitter After All These Years: Peter Shilton And English Media Disgrace Themselves 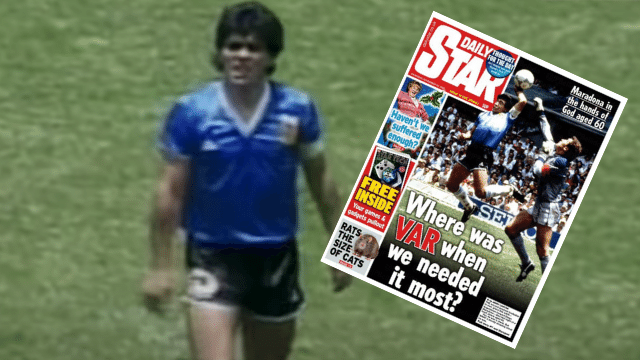 Football
5 months ago
By Aaron Strain
Over 30 Years On, Maradona Balling To 'Live Is Life' Is Still Amazing
28