With the new Premier League and European league seasons around the corner (and the League of Ireland's top two clubs flying the flag with pride in European qualifiers), the usual transfer bullshit is naturally festering in both newspapers and online newsfeeds alike.

This morning, however, all the necessary factors aligned to suggest a seemingly genuine transfer story involving Robbie Brady may be about to break. A potential move to Everton for Ireland's breakout star got us thinking about the club futures of a number of Brady's international teammates.

With Jeff Hendrick and Wes Hoolahan both - as it stands - set to play Championship football this season, Darren Randolph hardly guaranteed significant playing time at West Ham, and Séamus Coleman once more proving himself one of the top right-backs in the game over in France, we've suggested a number of moves which would suit both player and country for five key figures in Martin O'Neill's squad. 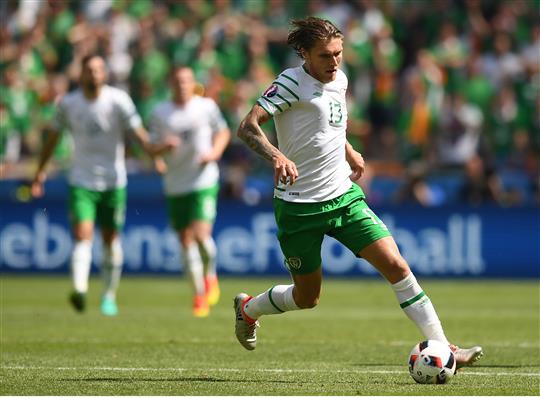 If Jeff Hendrick is still playing Championship football next season I will roundhouse kick the nearest lamp.

The 24-year-old Dub scored just two goals for Derby County last season but consistently impressed in the Rams' midfield, while also establishing himself as an accomplished international alongside either Glenn Whelan, James McCarthy or a combination of the pair.

Hendrick upped the ante at the Euros with a string of fine performances, and might have finished the tournament with any number of world class strikes had fortune not favoured those pesky Swedes. It seemed to do little but spur him on, however, and approaching Ireland's showdown with Italy, one Italian journalist suggested he could slot into a Serie A midfield with little issue.

Earlier this week it was reported that Derby had turned down a third offer for Hendrick - a £7m bid from Burnley. We reasoned, however, that a move to the Riverside and Burnley's fellow promotees 'Boro would greater compliment Hendrick's abilities.

The reasons laid out by Gavin Cooney were simple: 'Boro have a better chance of staying up, and Aitor Karanka increasingly moved towards a 4-2-3-1/4-3-3 system as the season wore on and promotion beckoned - a style of play which would suit Hendrick greatly considering his ability when pushed slightly forward in a midfield three.

The move he will make make: Burnley. Derby are desperate to keep hold of him, but Burnley have twice upped their bid for Hendrick, meaning they should eventually land their man. 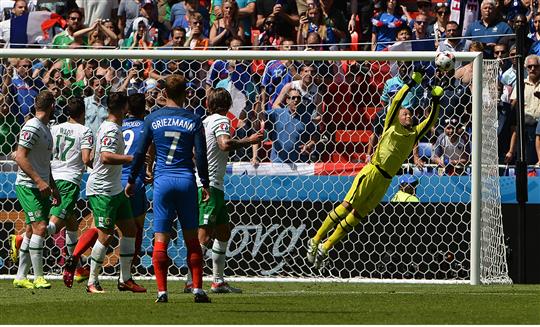 The 29-year-old Randolph deputised for an injured Adrían toward the conclusion of last season, making 15 total appearances for West Ham. Despite impressing consistently for Ireland during Euros qualification, the Bray man looked - on occasion - 'shaky' in the Hammers' net, with their final game at the Boleyn Ground Formerly Known As Upton Park against Manchester United exposing a supposed weakness at his near post.

Despite suggestions that Kieron Westwood should perhaps usurp Randolph in Ireland's side as a result of his fine form for promotion-chasing Sheffield Wednesday, Randolph proved his class in France - his save from Ciarán Clark's wayward header vs Sweden in particular one of the stand-out stops of the tournament.

Now approaching his 30s, which for a goalkeeper should be his prime years, Martin O'Neill and Ireland need Randolph to play regular football. And so does the player himself, particularly if he wishes to continue in Ireland's goal.

A move to Southampton would do little to achieve such a thing with the fit-again Fraser Forster one of the finest 'keepers in England on his day. Indeed, if a starting position is imperative, a Premier League move might be a stretch for Randolph now that Martin Stekelenburg has joined his compatriot Ronald Koeman at Everton. But cast your eyes for a second towards Bournemouth, where you'll see the potentially calamitous Artur Boruc between the sticks. Would Randolph not be a better option? Of bloody course he would. He did, however concede 12 goals versus Eddie Howe's side in the 2014/15 season, which would suggest regardless of any goalkeeping vacancy on the south coast, a move to the Championship is more likely for Randolph should he wish to rid himself of the 'back-up goalkeeper' tag.

The Irishman will only cost a potential suitor £3m according to reports.

The move he will make: Given the fact that West Ham are well-established in the Premier League, and that Adrian became increasingly error-prone as the season wore on, he will fancy his chances of becoming first-choice at the Olympic Stadium. 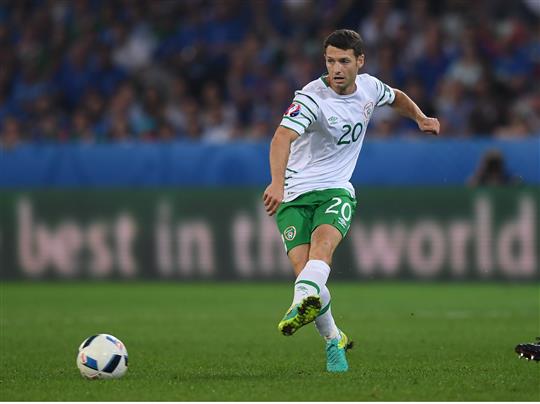 A player of Wes' ability - and persistence - deserves an Indian summer in the Premier League. The former Shelbourne playmaker has been a joy to watch in Irish green, and surely hoards of European football fans were bewildered to discover his age relative to the staggering lack of action he has seen in the national team during past campaigns.

The world, perhaps, is only just now ready for Lionel Wessi, and a swansong at a battling Premier League club such as Hull, where he could reacquaint himself with international teammates David Meyler and Alex Bruce, as well as Cork youngster Brian Lenihan and former clubmate Robert Snodgrass, would seem a fitting end to a fine career. The added bonus at Hull, too, is the pace in their ranks. The 22-goal Abel Hernandez would surely have a field day running onto Wes Specials from the final third.

The move he will make: The reality is that Wes Hoolahan, at 34, will not be departing Norwich this summer. And even were he to continue his belatedly blossoming international career, Ireland doesn't necessarily need Hoolahan to be playing at a higher level than the Championship. He has already proved himself. In fact, he did so many seasons ago. 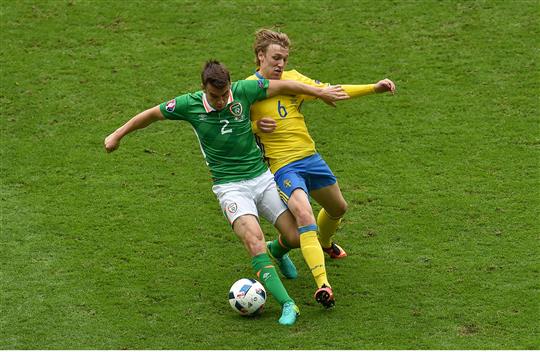 Now 27, Coleman is entering his peak years. After a couple of years of restricted and unspectacular showings for Ireland, he finally showed as much in France. Against Italy, the 5-foot-10 pride of Killybegs was a colossus, causing Roy Keane to correct himself when he initially labelled him a mere 'good player' the following morning. No, Séamus Coleman is a very good player, amended Keane, which might be the nicest thing Keane has ever said about a subordinate.

Coleman has netted 20 goals from right-back in seven seasons at Goodison Park, and all indications seem to suggest he's more than happy to remain and Evertonian for the foreseeable future. He'll likely excel there under Koeman, whose right-back role at Southampton - particularly when filled by Nathaniel Clyne - afforded enormous offensive freedom, both down the right wing and inside.

And yet, the fact remains that Coleman is a player worthy of a larger stage. It might seem somewhat disrespectful to Everton, and that's because it is, but the Donegal man should be playing for a club that at the very least consistently qualifies for the Champions League. He proved that at Euro 2016, and has probably proved it in four of his seven seasons on Merseyside. With Manchester United set to enter the market for a right-back as soon as José Mourinho begins to offload some of his deadwood next month, it's hard to envisage a more suitable candidate than the man who has made a name for himself in the position just 35 miles down the M62.

Everton have proved resilient in fending off the advances of so-called bigger clubs in recent years (see Chelsea's pursuit of John Stones), but Coleman and United strikes as a perfect fit. Perhaps the lure of Champions League football next season might be enough to sway the loyalties of Ireland's stand-in captain this time next year.

The move he will make: Coleman will likely remain loyal to Everton, and see how thigns pan out under Ronald Koeman. 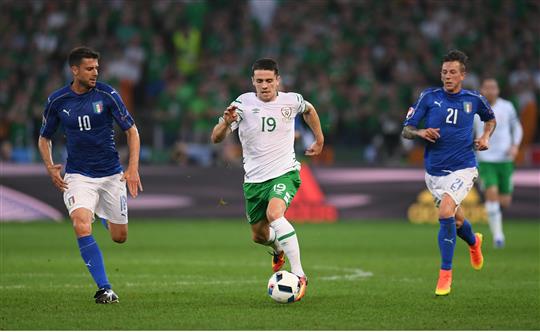 It looks a serious possibility that Ireland's two-goal Euros hero will join his international teammates Coleman and James McCarthy at Goodison this season, in a move that will leave Martin O'Neill rubbing his hands together with glee.

The 24-year-old was linked with a move to champions Leicester earlier this summer, but the arrival of Steve Walsh as Director of Football at Everton seems to have changed the game with regard to Brady's future. Walsh is understood to be very keen to pip his former employers to the signing of Brady for his new club, and the bookies' odds reflected as much following a huge surge overnight.

Brady scored three goals for a blunt Norwich outfit last season, but Ronald Koeman's free-flowing approach - spearheaded, usually, by aerially prolific frontmen - would provide Brady with the ideal platform to increase his productivity drastically. Should Everton keep hold of Romelu Lukaku, for example, it's difficult to imagine Brady's crossing game not flourishing along the Mersey. From Everton's perspective, the Dubliner also provides a like-for-like set piece replacement - and perhaps even positional swap - when Leighton Baines is inevitably ruled out for seven weeks at the beginning of the season.

The move he will make: With talk cooling on a potential Leicester move, and the Steve Walsh factor now at play, Everton makes sense.

Football
1 week ago
By Maurice Brosnan
Ireland 1993: Killing Each Other Like Maniacs And Football
2