It's been about a year now since TikTok exploded during the depths of the first lockdown, and it feels like it's here to stay. We've seen countless comedy sketches, dance moves, and downright strange stuff on the app - but we're here to tell you the best footballers to follow on TikTok, as well some great football-themed accounts.

A fair few footballers - mainly from the Premier League and the Bundesliga - have taken the plunge on to TikTok and we've compiled a list of some of the best accounts to follow.

Robert Lewandowski's venture onto TikTok was certainly the most memorable of lockdown 1 and, though he hasn't posted in a while, it's always worth going back and marvelling at some of the cringeworthy dance videos he posted this time last year.

Just like any football fan, we're suckers for a good Ronaldinho highlight reel - and that's basically what his TikTok account is. You can't go wrong here.

Alphonso Davies is one of the few footballers to have made the dive into comedy sketches on TikTok and, if we're honest, some of them are actually hilarious.

Mipo Odubeko is an exciting up-and-coming Irish talent at West Ham, and his TikTok account is a great way to keep tabs on how he's getting on in their underage teams.

Roberto Carlos' TikTok - as well as having some amazing clips from his playing days - is just downright weird.

Toni Kroos' account is a lot of fun, with some great edits of one of the best midfielders in the world bossing it out on the pitch.

Ian Wright's positivity and sense of fun are electric, and his engagement with fans on TikTok is just a delight to watch.

Leicester's official account has the comedy game down to a tee, and they're always quick to jump on the latest trends with their own twists.

Brentford's account is a bit more tongue-in-cheek than Leicester's, but it's just as fun.

Watford's account has a similar vibe to Brentford's, and they're not afraid to have a laugh at their own expense either.

Spartak Moscow's page is bizarre. They seem dedicated to calling out players and clubs unrelated to Russian football at all. It's pretty damn entertaining all the same.

The Bundesliga's YouTube channel has long been the best way to get light-hearted highlights videos and fun snippets, and their TikTok page is no different.

@bundesliga@f.ootball.tiktoks antworten Congrats to everyone who got it right ? ##bundesliga♬ true love by pink - alyssaaudios

The League of Ireland finally arrived on TikTok last week, and their content so far has not disappointed. A must follow for all Irish football fans.

If you're as invested in all things jersey-related as we are, then you'll just love CFS's TikTok output.

That's just a small selection of the best footballers to follow on TikTok, but there are countless others like Mason Greenwood and Phil Foden to follow. We're just patiently waiting for Robert Lewandowski's return.

SEE ALSO: The Squad From Jurgen Klopp's First Title Triumph: Where Are They Now? 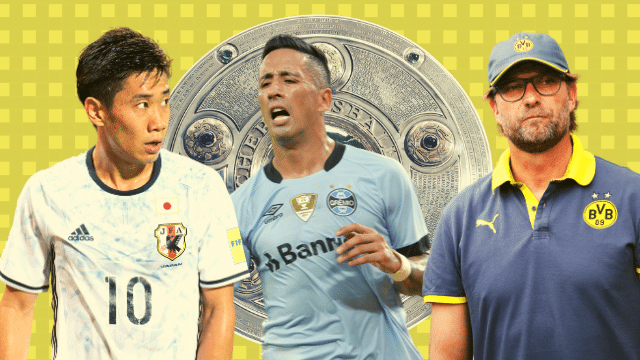