Following the sad passing of Liam Miller, aged just 36, we are republishing this retrospective on his career, written just over a year ago by Mikey Traynor when Liam was playing for the Wilmington Hammerheads in North Carolina, embarking on a new phase of his life with his wife and young children. Today, we pass our heartfelt condolences to them, and offer this tribute to the impact his football had on so many.

This article was originally published on Dec 8, 2016.

Ask the typical football fan what they know about Liam Miller, and chances are they'll scoff while bringing up names like David Bellion and Djemba-Djemba, as he was brought in and quickly moved on during a turbulent time in Manchester United's recent history, a patch between two great teams where the club were seen to be struggling.

That point is backed up by the fact that simply googling the words 'Liam Miller' will present you with a picture of both Eric Djemba-Djemba and David Bellion.. As well as Colin Healy.. In the related searches: 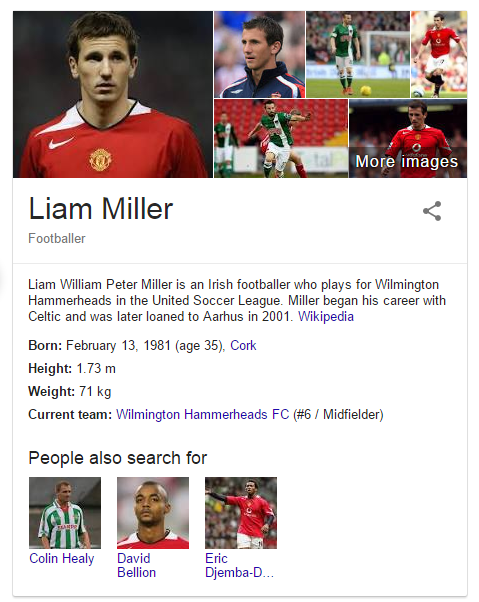 But there's so much more to his career than being just another one of Fergie's odd signings.

Miller left Cork in 1997 for Celtic's youth academy, like many young Irish men before him. But unlike most, he was lining out for Manchester United in the Champions League seven years later.

A club of that stature ultimately proved to be too big for him, and as you may have noticed above, in the 2016/17 season Liam Miller is playing his ball with the Wilmington Hammerheads, an amateur team from North Carolina playing in the 4th tier of US Soccer.

His career path could be viewed as nomadic, but he was following a well-trodden route until he decided to opt for something different. After returning home to Cork City, it seemed that his days in far-flung leagues were over, but then he set off in search of a new challenge. That deserves respect. More on that later.

It all started at Celtic, and two games stand out from his breakthrough season in 2003 that inevitably pop up whenever he is discussed. Playing off the striker, Miller bagged goals for himself in wins against Anderlecht and Lyon, announcing his arrival to the continent in the process.

After the Lyon performance, Martin O'Neill felt the need to act and try to tie him down to a long contract, but Manchester United pounced in a flash to lure him away, as he described to Bleacher Report earlier this year.

It happened so quickly. It wasn’t like I knew they were interested for weeks or months, or anything like that. It was around the January transfer window so I went down and was shown around Carrington and spoke to everyone at the club.

It was hugely impressive. Anyone would find it impressive. An opportunity like that doesn’t come around too often. Looking back, I thought it would be a great place to go and play football.

O'Neill was upset, and so were the Celtic fans. He was seen to be cashing in on his purple patch of form without establishing himself at the club that had invested time to his development. But for Miller, it was an opportunity that simply could not be passed up.

It was a pre-contract agreement that took Miller to Manchester United. Another kick in the teeth for Celtic who were hoping to at least get some form of financial benefit from waving goodbye to a player they wanted to build the team around, but this was back when Manchester United conducted business swiftly and without writing a blank cheque for the other club. 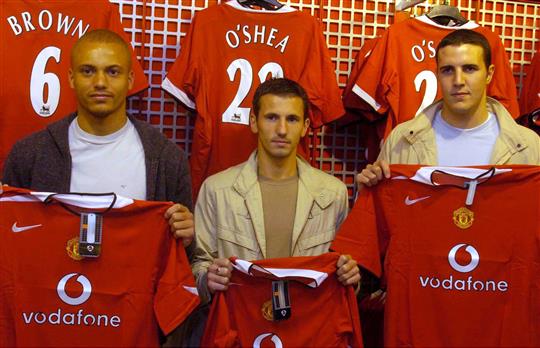 Right off the bat he drew comparisons to Roy Keane, purely based on his place of birth, but Fergie had a different idea to young Liam when it came to his best position. Ferguson tended to employ Miller out wide, rather than through the middle, on the rare occasion that he did play, but United's midfield was a tough place to find a home, even then.

Surprisingly, it was Leeds United that were allowed to take the Irish international on loan. Perhaps as a peace offering after stealing Alan Smith much to the dismay of all associated with the Yorkshire club, Miller arrived to play for Leeds and did so 28 times in that one season.

This arguably was the best consistent run of form we saw from the Ballincollig native, and he capped it with his first, and only, international goal in March of 2006, an absolute peach in Steve Staunton's first game in charge.

He wouldn't be given the chance to build on his season at Leeds United, who lost at the final hurdle in their attempt to return to the Premier League, a 3-0 playoff final defeat to Watford, because there was demand for him elsewhere. Sunderland were straight in for him, even with with Niall Quinn in charge on an interim basis.

Miller's old teammate Roy Keane would soon take charge, and he made the man once talked up as his heir a key component of his side. He played 54 times in two successful seasons where Sunderland were promoted as champions and then maintained their Premier League status.

After three consistent seasons of impressive regular football, Miller then found himself frozen out. Keano ran a tight ship at the Stadium of Light, and he wasn't impressed with Miller's timekeeping skills, according to his latest book:

I put Liam Miller on the transfer list. He was late too often. I was sick of the excuses and I told him I'd had enough of it. His agent rang me to tell me that Liam lived on a busy junction and it was hard to get out.

No hometown favouritism there. 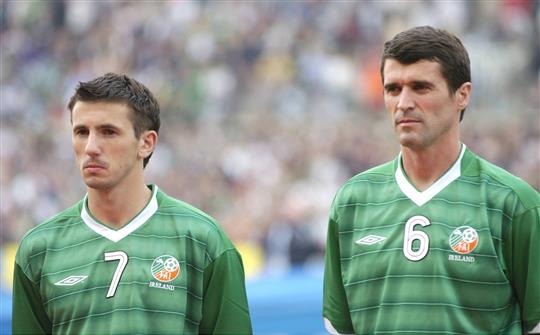 Miller joined QPR on a six-month deal hoping to return to the form he had previously shown in the Championship, but his contract was not renewed after 13 appearances, and he was left without a club. This did not stop Giovani Trapattoni calling him up to play for Ireland, a decision that was often moaned about by Irish football fans.

He would then return to the SPL with Hibernian in September of 2009. This move would coincide with the end his international career as he would never receive another cap leading some to joke that Trapattoni would rather use a player without a club than one who plays in Scotland. In total, Liam Miller represented his country on 21 occasions as a full international, having worked his way up from the U16s, to the U18s, the U20s, and the U21s.

Things went well at Hibs initially, in fact they started with a bang as he was awarded the SPL player of the month trophy in just his second month back, but after a dip in form for both player and club, a new manager and new signings saw him pushed out of the picture despite wanting to stay. Having been there and done that in the Championship, and having failed to reach a deal to stay in Scotland, Miller tried something out of left field.

Whenever an Irish international makes a trip abroad, the decision raises eyebrows. More often than not, an Irish player will slide down the English leagues or return to the League of Ireland once they struggle to find consistent playing time, but occasionally someone gets an offer that means we all have a reason to follow a new league.

You just don't see transfers like Robbie Keane to Inter Milan, Phil Babb to Sporting Lisbon, or Ian Harte to Levante any more. Even Aiden McGeady to Spartak Moscow seems ages ago. Before that, the likes of Liam Brady and Frank Stapleton were playing in Italy and Frace and giving us a reason to follow a team, and a league. Apart from Jack Byrne's loan to SC Cambuur, we've been starved of the chance to see an Irishman play in a different league, so we should be happy when it does happen.

Australia was uncharted territory for an Ireland international, and while there was no chance of him pulling on the green jersey anymore, we still were treated to the odd clip with enjoyable Aussie commentary as we woke up on a number of occasions.

Miller played for Perth Glory, and Brisbane Roar over three seasons where he was a key player seeing regular minutes in two of Australia's most interesting places. It will have been as much a life experience as a career move, as it's a drastic change of scene for a footballer, but the decision wasn't dwelled upon. The chance was grabbed with both hands, and he enjoyed it, as he told Independent.ie:

Australia wasn't something I planned for and I didn't know much about the Australian league before I came out.

But I have loved every minute. There are drawbacks; there is no flying the parents out for weekends. But it is a beautiful country and the A-League is good.

His final year down under was for the newly formed Melbourne City alongside Damien Duff, but as he was only contracted as a replacement player he took to the field just two times. At that stage of his career it seemed as though he would soon be calling it a day, but instead he again went in search of a team that could use his experience in midfield.

That search brought him home. For the first time in his career, and after a number of diversions along the way, Miller signed for Cork City and would play in the League of Ireland.

Miller played 29 times for Cork as they finished second in the league behind Dundalk and reached the FAI Cup Final where they would lose to the Lillywhites 1-0 after extra time. He was a regular presence in midfield, but manager John Caulfield informed him that he was not in the plan for the squad going forward. So what did he do?

He went out to find regular football again.

Liam Miller was never OK with not playing football. While pretty much every manager he played under had nothing but positive things to say about him, whenever his path to regular playing time became obstructed he found somewhere else that could use him.

After Cork City, the Wilmington Hammerheads, an amateur team from North Carolina who had just finished last in the lowest league of US Soccer, announced his arrival and while the crowds may look very different to when he togged out at Celtic Park or Old Trafford, at least he's still playing and enjoying his football.

Fair play to Liam Miller. Someone who was never afraid of leaving their comfort zone, he showed a hunger to play the game of football in situations where most would have settled for less action in a more familiar location.

If more internationals followed suit, maybe managers in Europe's biggest leagues wouldn't be absolutely terrified to give more of our lads a chance.

This article was originally published on the 8th December, 2016. Just 14 months later, Liam Miller lost his battle with cancer and tragically passed away, aged just 36.

Balls.ie would like to pass our sincere condolences to Liam's family, friends and everyone who was impacted by one of the true gentlemen of Irish sport.

random
4 years ago
By Conor Neville
"I Have A Very Poor Opinion Of Matt Busby" - The Story Of The Only Irishman To Manage Manchester United
random
4 years ago
By Conor Neville
10 Of The Best Managers That Cork Has Ever Produced
Football
4 years ago
By Darren Holland
Who's Older? The Surprisingly Tricky Cork Sporting Icons Quiz
Popular on Balls
Football
7 hours ago
By Gary Connaughton
Sebastien Haller Breaks Remarkable Champions League Record Against Sporting
Football
1 day ago
By Jonathan Byrne
Ian Wright Heard Of Mother's Death During FA Cup Punditry Duties
Football
1 day ago
By Jonathan Byrne
How Leeds United Became Barcelona's Champions League Nightmare
GAA
18 hours ago
By PJ Browne
Thought Of Absent Brother Heightened Emotion In Graeme Mulcahy