Maybe he's feeling the pressure newly-arrived David Luiz breathing down his neck but Gary Cahill is making it known that he wasn't happy with referee Andre Marriner's officiating in Sunday's 2-2 draw with Swansea at the Liberty Stadium.

Chelsea dropped two important points after going one goal to the good thanks to Diego Costa before a penalty from Gylfi Sigurdsson and a hugely contentious goal from Leroy Fer forced that man again, Diego Costa, to save Chelsea's blushes at the death.

Swansea's Fer appeared to clip the Cahill's heels just after the hour mark, before running through the back of the defender and poking the ball past Thibaut Courtois and it's this incident which has led to Cahill's fury at Marriner and his officials.

Speaking to the BBC after the match, a visibly angry Cahill said that 'you could be sat on the moon and see it'.

[It was] clearly a foul. Come on, seriously. It was clear as day and seeing it back has made me even more angry. I said to the referee, 'there's three of you that can see that'. There were two fouls on me and between the officials they have said that they couldn't see it. For me that is incredible.

I took the touch away from him [Fer], he came through the back of me. It's all fun and games for the fans - but it's the players who suffer. That kills me and kills my team. We have dropped two points which is massive in this league.

Cahill took to Twitter to post a gif of the incident, along with the word 'incredible' and several angry emoji faces, though the tweets have since been deleted.

Manager Antonio Conte added to Sky that it was a 'bad decision' but appeared to be slightly more pragmatic than Cahill.

For the second goal, I think everyone can see the double foul on Cahill. I think there is a great mistake, a great mistake of the referee. But this can happen.

‘I also want to say this can happen, to one side or the other. I don't want to complain about this. But that is the reality. Yes, it's a pity. 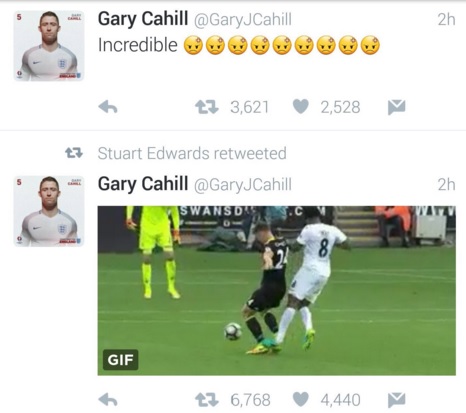 Players posting gifs of incidents post-game is further proof of our changing times: the glory days of team photos in baths are long since gone.