"He constantly had a huge entourage around him.

"I went to see Boca Juniors play. He had his own little box. I went with his family. The atmosphere was unbelievable at this game.

"One of his daughters was literally holding him as he was screaming over the balcony, holding him so he wouldn't fall off. He had such an incredible passion for the game."

Lineker played with Maradona for one half on an exhibition game. The England international was with Barcelona at the time and played for a Rest of the World side against an English League selection.

"There were players like Platini on the pitch. Everyone was totally in awe of [Maradona]," said Lineker.

"He was in the dressing with a pair of shorts - like you'd roll your socks up - and he just juggled them on his left foot for about five minutes.

"Then we went out on the pitch and he did something incredible, one of the most unbelievable things I've ever seen on a football pitch.

"He juggled the ball all the way out to the centre circle and then bang, he whacked it as hard he possibly could [up into the air] and waited. It came down and he did it again. He did it 13 times. The most he ever did was walk three paces to it.

"All of us were standing there going, 'That's impossible'. I remember going to training the next day at Barcelona. We all tried it and the best anyone did was three, and they were all running for the third one.

"I've never seen anyone have such a beautiful affection for a football."

Lineker was on the pitch during the 1986 World Cup quarter-final between England and Argentina for two of Maradona's most famous goals: The Hand of God and his slaloming run which was voted Goal of the Century.

"You've got to realise that the pitch at the Azteca was awful," said Lineker.

"It had been relaid. Every time you put your foot on a piece of turf, it just disappeared under your foot.

"To do what he did, that little pivot and turn on the halfway line and then to go past the players like they weren't there was just the most remarkable thing.

"It was the closest in my life that I've ever felt like I ought to applaud someone else scoring a goal. Obviously, I didn't because you'd get destroyed back home.

"He was head and shoulders the best player of my generation."

See Also: Five Great Writers On The Genius And Tragedy Of Maradona 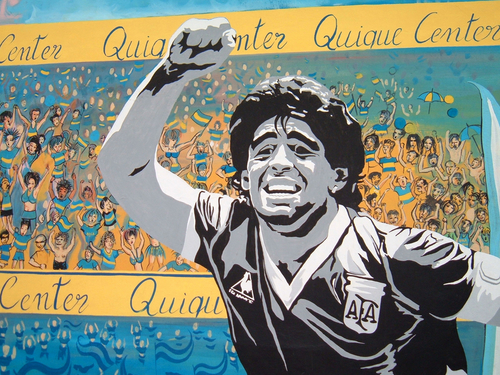 Football
1 month ago
By Aaron Strain
Over 30 Years On, Maradona Balling To 'Live Is Life' Is Still Amazing
28