In the absence of Premier League action, Gary Lineker, Alan Shearer and Ian Wright continued to do their top tens lists on Saturday night's Match of the Day.

Shearer and Wright both placed Roy Keane at number one on their lists.

A previous edition the show had ranked Keane as the Premier League's all-time number one captain. With that, Gary Lineker had no argument. However, he strongly disagreed regarding last night's ranking.

"As a footballer and an influence on our game as an import, I don't know," said Lineker.

"Obviously, he was a top player but he wasn't a gifted, joyous individual that you could enjoy. He was a winner and a warrior but for me, there are so many better players in this list.

"As a captain, yes, he's a leader and a warrior, but 39 goals, 33 assists in 366 games, it's pretty good but he wasn't a particularly creative footballer. He was an aggressive footballer, he was up and down and could pass it, he could keep it but he played in brilliant sides.

"For me, football is about bringing joy and lots of these players brought joy but I'm not sure Roy Keane [did]. I think he's an unbelievable player and would have been up there in my top two captains but as footballers..."

Ian Wright said that "only someone" like Roy Keane could have placed ahead of Henry on his list. 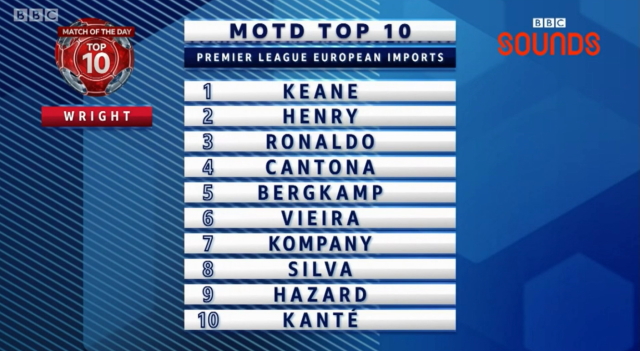 "For me, he was the best captain in the Premier League," said Wright.

"When you look at what he ushered in with the [Class of] '92, with the great players around him, with the consistency of his performances, without compromising exactly what he was about in respect of the way he sees the game and his principles and his morals... Honestly, I've just got so much admiration for Roy Keane.

"Thierry is better than most players in the whole world but the fact is if we're going to talk about what Roy Keane's done in the Premier League, what Thierry has done and the individual impact that they both had, Roy Keane ushered through the [Class of] '92 and kept world class players focused on what they were doing.

"We were at the World Cup together and we spent a lot of time together... I was just thinking, 'Oh my gosh, we're really cool mates and it's fine'.

"I laughed because I thought he was only messing about. He said, 'Wrighty, I'm not coming'. He hung up the phone and I never saw him until the evening.

"He said, 'This is why Man Utd were so successful. We done what had to be done on time'.

"To be under his stewardship as a captain, he would take nothing in respect of failure." 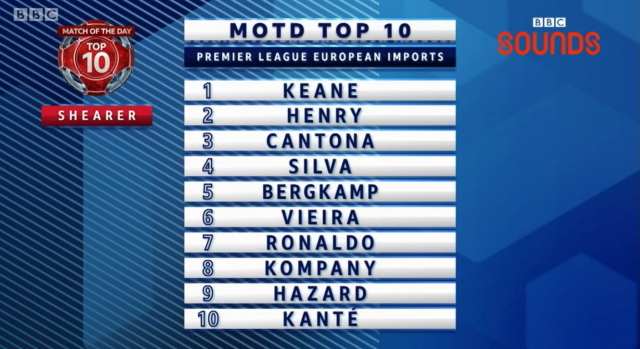 Quiz: Name The Ireland Internationals From Pictures From Their Ireland Underage Days

Football
1 month ago
By Gary Connaughton
Alan Shearer Went In On Ciaran Clark On Match Of The Day Last Night
Football
2 months ago
By Gary Connaughton
Alan Shearer Reveals He Gave Warning To Steve Bruce Before Taking Newcastle Job
Football
2 months ago
By Gary Connaughton
Alan Shearer Reveals Post-Match Roy Keane Confrontation After Infamous Red Card
Popular on Balls
GAA
2 days ago
By PJ Browne
Insane Drama As Late TJ Reid Goal Sends Ballyhale Into All-Ireland Final
Rugby
1 day ago
By Colman Stanley
Yesterday Was Not The First Time Wayne Barnes Sent A Player Off For Getting Lippy
Rugby
23 hours ago
By Colman Stanley
Champions Cup Predictions And Permutations For The Irish Provinces
The Rewind
2 days ago
By Jonathan Byrne
The Definitive Ranking: Deli Items Ranked From Best To Worst