The behaviour of a sizeable proportion of England fans was nothing short of disgraceful in the buildup to this evening's Euro 2020 final.

Not content with producing some ugly scenes in London city centre, a number would make their way to Wembley Stadium and attempt to get into the ground without tickets.

Unfortunately a number of them would succeed. What's more, there was some thuggish behaviour on show as large groups assaulted fans already inside once they barged their way in.

Unbelievable footage of violence in Wembley tonight. A literal child gets punched by a full grown man and an Asian man is kicked repeatedly in the head by several people. Disgusting behaviour. pic.twitter.com/NLtvjgF8Fe

A number of journalists who were inside the ground detailed some ugly scenes in the stadium, with many of those who had tickets unable to take their seats after they were taken by the intruders.

Perhaps unsurprisingly, the entire thing was not given the coverage it deserved on the BBC.

Gary Lineker even made light of the situation at halftime, saying this:

Gary Lineker "I guarantee you, all 4 of us had tickets"

He just laughs off the violence at Wembly & dissasociates himself.

England and its class system 🙄

Now perhaps Lineker did not know the severity of what had been taking place inside the ground.

However, this is a shameful comment to make after the assaults that had occurred a matter of minutes earlier.

It certainly did not go down well with the watching public.

Disappointing to hear @GaryLineker make light of the situation of England fans breaching security trying to get in to Wembley! I just hope no one was hurt but as long as Gary was ok in the studio with his mates it doesn’t really matter does it?!🤷🏻‍♂️#Euro2020Final #bbcfootball

And @GaryLineker thought it appropriate to make a joke at halftime, nothing funny about this Gary! https://t.co/T1uTJeA9IX

Not the type of comment that should be made after such a serious group of incidents.

SEE ALSO: Even Richard Keys Has Had Enough Of Unruly England Fans 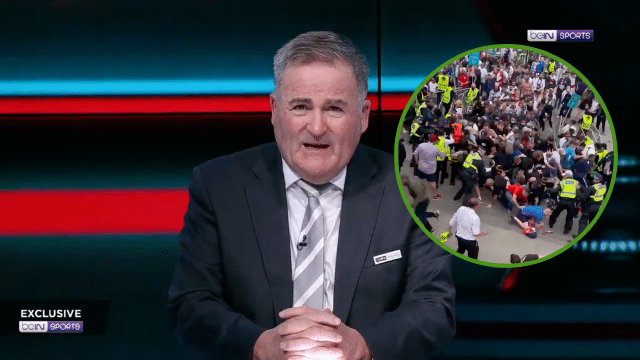