Spurs got their Premier League season off to a brilliant start this evening, puling off a big shock to beat Manchester City in North London.

After a very dodgy opening 20 minutes, Nuno Espirito Santo's side put in an excellent shift to emerge as 1-0 winners. Heung-Min Son's fatnastic second half strike was the difference between the sides.

Clinical counter-attack from Tottenham, and the champions trail in North London...

However, one big cloud hanging continues to over the club in the future of Harry Kane.

The England captain was not in the squad for today's game, with the club saying he was not fit to play after arriving to pre-season training late as he held out for a transfer to Manchester City.

It seemed as though the striker was not even in the stadium this evening, something Gary Neville believes does not bode well for his future at the club.

Speaking on Sky Sports after the game, Neville said Kane's absence could be proof that he is on his way out of Spurs:

🗣 "Every other England player that's been part of the Euros have been involved on the bench or in the squad. Harry Kane would be here today if there was no doubt over his future."@GNev2 reads the situation of Harry Kane not even being in the stadium as a sign that he's gone pic.twitter.com/ZKkVmTejj2

I read into the fact that he wasn't involved today. I believe that every other England player that was involved in the Euros has been involved this weekend on the bench or in the squad.

Harry Kane would be here today, I feel, if there was no doubt over his future.

I took into it that he's gone. I really did, not being here today, not even being visible in the stadium.

The most prominent Tottenham player, the first game of the season, and he's not visible in the stadium? We have a lot of cameras around and I suspect that we were looking for him everywhere.

To not see him here today was a surprise...

[Daniel Levy] probably has something happening this week (with a transfer), there are no Premier League games this week and there is five or six days to do something.

I do believe that that told me he was gone today with him not being on the bench.

I might be completely wrong. In two weeks time he might be here and I would be delighted to come here and watch him for Tottenham.

But every other England player has been involved...

He comes back late, he's in isolation, he's not here today. If you put all that together, he's the most professional player you've ever seen, there is something going on.

Spurs continue to insist that Kane is not for sale at any price.

While it may be understandable that the 28-year old took no part in today's game, the fact that he was not even present in the stadium is a bit of a red flag.

It will be interesting to see if anything further develops over the coming days.

SEE ALSO: Amazingly, Graeme Souness Has Already Had His First Dig Of The Season At Paul Pogba 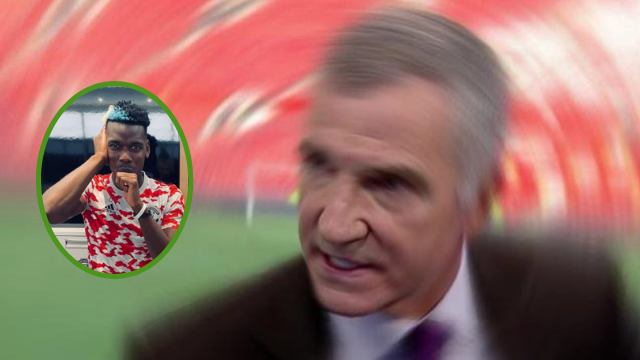 Football
1 day ago
By Gary Connaughton
Frank Lampard Reveals Ruthless Nature Of His Sacking At Chelsea
Football
1 week ago
By Donny Mahoney
Rio Ferdinand Explains Why He Called For Solskjaer To Be Sacked
Football
3 weeks ago
By Eoin Harrington
What Exactly Is The Role Of Football Pundits In The Social Media Age?
Previous Next