Manchester United have been well short of the required standard this season. Entering the campaign with ambitions to challenge for the league and Champions League, they look like they will do well to finish in the top four on current form.

The season is still young, but United's performances have been woeful. They have not even played well in games they won, with the final scoreline often covering up what were in truth some very poor showings.

They are a team that looks like they are playing with any sort of methodology, cohesion, or even a game plan. It is nowhere near good enough for one of the most expensively assembled sides in the history of football.

Yesterday's performance against Leicester City was the prime example. United managed to stay in the game for large periods thanks to two moments of individual brilliance, despite being completely outplayed throughout. In a team full of attacking talent, they were a set of individuals who failed to work as a unit.

Gary Neville Ignores The Elephant In The Room

Speaking on Sky Sports last night Gary Neville said United are now getting the results they deserve after some lucky wins earlier in the campaign.

It is scrappy and scruffy to watch. When you play against a team with a methodology and organisation to them, you are going to get pulled apart. That is what's happening...

We saw a team picked today with Greenwood, Sancho, Ronaldo, Pogba, and Fernandes in it, five of them. I wouldn't want to be a defender in that team.

I love them as players those five, but having them in the same teams means there is not enough workhorses...

Manchester United are imbalanced and they are getting what they deserve now in terms of results. That needs to change, the performances need to be a lot better.

It is clear this team as currently constructed is now working, both on and off the ball.

There are no discernible patterns in attack, while out of possession they do not defend as a unit in the manner we expect to see from top teams.

Considering the talent United have at their disposal, there is one person who must shoulder the responsibility for this.

💬 "When we concede four, I probably made a couple of bad decisions."

Ole Gunnar Solskjaer took responsibility after #MUFC saw their magnificent unbeaten record away from home in the Premier League come to an end at Leicester... pic.twitter.com/y0uSDKlPN1

If it wasn't clear before, there is now no doubt that Ole Gunnar Solskjaer is not capable of leading a team to the summit of the Premier League. Having been in charge for almost three years, United still do not look like one that has been properly coached.

Compare that to the impact of Thomas Tuchel, Jurgen Klopp, or Pep Guardiola, all of whom stamped their philosophy on their respective teams within a few weeks of their appointment.

Despite this, Gary Neville still ignores the Norwegian elephant in the room. While it may be clear that the vast majority of United's problems stem from the failings of their manager, the pundit refuses to place the blame on his former teammate.

They are nowhere near good enough out of possession. They are the weakest out of all the teams at the top of the league without a shadow of a doubt. They don't press...

Those players' strengths aren't out of possession, they are in possession. The great players are able to do it in both ways, but these ones are biased towards the attacking side of the game...

They need to have the work ethic of Bernardo Silva, Kevin De Bruyne, or Sadio Mane, players that are world class that work like dogs every single game. I don't see that out of possession with United's talented players.

They don't work as hard as Mane, Firmino, De Bruyne or Bernardo Silva. Better player and works harder means you're not going to finish higher than them, it's as simple as that. You better start working as hard as they do...

They won't do anything with the manager. I think that ultimately the club are stable in that respect considering the last ten years, they realise they will go through these moments.

They are integrating Varane, Sancho, Ronaldo, and I think they will see it through.

It is a manager's responsibility to fix exactly the type of issue Neville is describing. Clearly, Solskjaer does not have the ability to do so.

United's insistence in sticking with the manager is baffling to most onlookers. An argument that has been frequently made is that the team failed to shine under top level coaches such as Jose Mourinho and Louis van Gaal, so why would they go down that route again?

Ignoring the fact that both Mourinho and van Gaal were past their prime when they got to Old Trafford, why would the club persist with a manager when they know there are better options out there?

One thought experiment sums up the situation perfectly: How many of the other 19 clubs in the Premier League would swap their manager for Ole Gunnar Solskjaer? There is a real argument to be made that the answer to that question is zero.

Manchester United won't be winning anything as long as he is in charge, whether Gary Neville and the rest of his former teammates are ready to admit that or not. 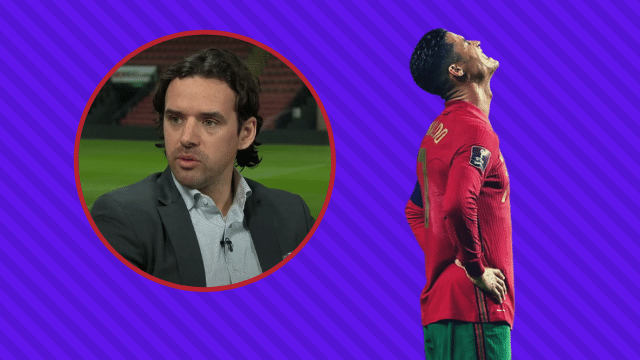 Football
5 days ago
By Gary Connaughton
Frank Lampard Reveals Ruthless Nature Of His Sacking At Chelsea
Football
2 weeks ago
By Donny Mahoney
Rio Ferdinand Explains Why He Called For Solskjaer To Be Sacked
Football
3 weeks ago
By Eoin Harrington
What Exactly Is The Role Of Football Pundits In The Social Media Age?
Previous Next

Football
5 days ago
By Gary Connaughton
Frank Lampard Reveals Ruthless Nature Of His Sacking At Chelsea
Football
2 weeks ago
By Donny Mahoney
Rio Ferdinand Explains Why He Called For Solskjaer To Be Sacked
Football
3 weeks ago
By Eoin Harrington
What Exactly Is The Role Of Football Pundits In The Social Media Age?
Popular on Balls
Football
7 hours ago
By Gary Connaughton
Sebastien Haller Breaks Remarkable Champions League Record Against Sporting
Football
1 day ago
By Jonathan Byrne
Ian Wright Heard Of Mother's Death During FA Cup Punditry Duties
Football
1 day ago
By Jonathan Byrne
How Leeds United Became Barcelona's Champions League Nightmare
GAA
18 hours ago
By PJ Browne
Thought Of Absent Brother Heightened Emotion In Graeme Mulcahy