It's fair to say Gary Neville was peeved after Manchester United's poor performance against Newcastle United on Monday night.

There was a lot of anticipation for the late game. Man United hadn't played in quite a while and Christmas brought more fans in armchairs watching on.

Newcastle had endured a tough fixture list as of late. After the welcoming of United to St James' Park, the coming games looked to give some respite.

However, the home side were probably unlucky to just pick up a point in the end. United looked like a team out of rhythm. Their first outing in sixteen days since the closing of their training ground.

Gary Neville was sitting with nostrils flared in the Sky Sports studio after the fact and didn't hold back in his criticism of the team, the individuals and the tactics.

"That was a mess in the second half, in terms of formation, style - it was desperation," Neville said. "It was really worrying. I think there will be a lot Rangnick hates about that performance."

"They've not done one single thing right as a team, and not one single player can go in and say they've done their jobs, or even done themselves justice," he continued.

Allan Saint-Maximin's superb first-half goal could have been followed up by another. He made the usual efforts to unsettle the opposition defence alongside Callum Wilson.

When it comes to the analysis of the first-half, Neville was even more lambasting, especially in terms of some of the body language of the players on the pitch at 1-0 down.

"Ralf Rangnick is not going to get the sack, he's only had a few weeks with them, but honestly, they'll get a lot of managers the sack, that lot, if they carry on like that."

🗣 "It's devastating for the younger players if the two best players are looking at the others as if they're not good enough." @GNev2 blasts Cristiano Ronaldo and Bruno Fernandes for their whinging and running off the pitch at full-time pic.twitter.com/euSz2kXLg0

When it comes to pointing fingers, Neville thinks there's a lack of leadership in the dressing room and it's spilling over onto the pitch.

"We talk about body language and we talked about it earlier in the season when Ronaldo ran off at the end of the Everton game. He's run off again tonight," Neville said.

"He ran off at Watford, when everyone knew the manager was going to get the sack. And at Norwich. And there's (Bruno) Fernandes' whinging too."

"They're the two senior players. It's devastating for younger players when the two best players are looking at every other player like they're not good enough."

Edinson Cavani, who's been unlucky with injuries and with the aforementioned Cristiano Ronaldo taking a starting striker spot, came up with the goods in the second half.

🗣 "I don't think they are all with each other in that dressing room."

🗣 "The players don't look happy out there on the pitch."@GNev2 questions the problems with the dressing room and the leadership within the Man United squad pic.twitter.com/fiA9kmASoQ

Neville reckons Cavani exemplifies something different to Ronaldo and Fernandes. "Cavani takes that away. I don't think Cavani wilts in the presence of Ronaldo or Fernandes."

"I think he stands up to them and helps other young players on the pitch. He needs to be on the pitch," he said. Cavani has featured six times in the Premier League this season.

"I don't care how you've played, you need to go over and clap the fans at the end of the game. Get over to them, particularly when you're the best player in the world, and one of the greatest of all time"

"It's annoyed me for about two months," Neville continued. "The best players in your team...it's devastating when they're showing that look and body language to the younger ones."

See Also: Quiz: How Well Do You Remember The Euro 2020 Final? 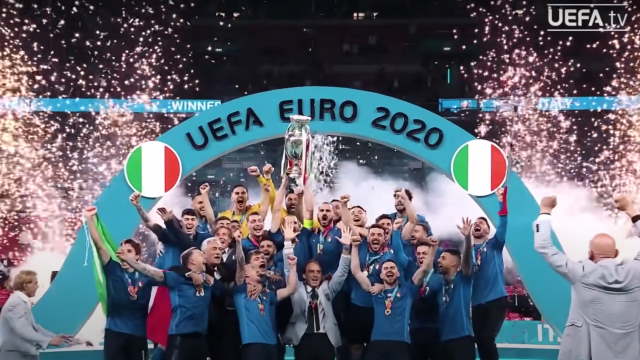