Gerard Pique is one of the greatest central defenders of the modern era. The 35-year old has won countless honours with both Barcelona and Spain, anchoring two of the best sides football has ever seen.

While he will always be synonymous with Barcelona, he did of course have a spell away from the club.

Pique joined Manchester United as a 17-year old back in 2004, uprooting from his life in Catalonia to move to Old Trafford. It was certainly a difficult transition, joining a dressing room full of massive names all while trying to adapt to a new country.

Roy Keane was the main man at the club at the time of his arrival, and while he had huge respect for the Irishman, he was also terrified of him.

Speaking on The Overlap with Gary Neville, Gerard Pique looked back on the time when he first arrived at Manchester United. He said that Roy Keane was certainly an intimidating figure, with the then teenager incurring his wrath on one occasion after his phone went off in the dressing room,

Pique: We all know Roy, but when you're 17 you look at Roy differently.

I had just arrived, I didn't know him. It was kind of scary at some points.

It was so scary, that a few years later we went with Barcelona to play Celtic in Scotland and he was doing some kind of TV programme.

I was walking after the game and he came over to me to talk, and part of me was like that little kid that arrived in Manchester when I was 17 and thought 'of fuck Roy Keane is here!'

I just remember at that time when I was 17 with Roy, he was the captain and he was strong always with a tough message. I think he was a great captain, but he was tough sometimes.

Neville: Was there an incident with your phone?

Pique: That was Roy Keane. Now sometimes I see me and my teammates on a phone after a game. Now things have changed a lot.

That time, it was vibrating in and the guy could feel it in my head because it was in my pants (hanging down) in the dressing room. [Keane] stood up and said 'who the fuck owns this phone?!'

Not it's very different with the veterans and the young players. At that time there was more respect, but the old ones wanted that distance. Now, the young ones arrive and after six months they are like best teammates.

Pique never really established himself as a first team player at Manchester United, making a few appearances before returning to Barcelona in 2008.

The lure of his local club was too much to turn down, although he credits Keane and the other characters at the club for helping forge him into the player that he would eventually become. 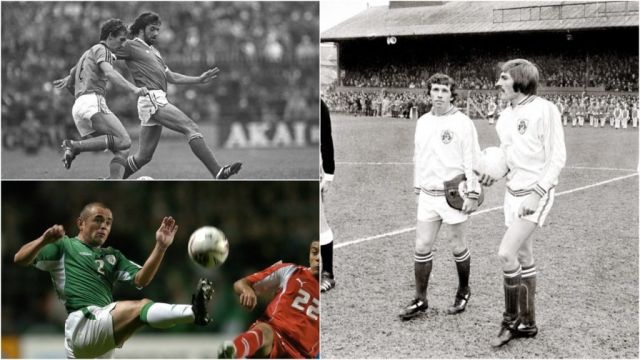