Watch: Goalkeeper Gets Himself Sent Off Before Kick-Off In Paraguay Cup Final

Cup finals tend to be very tight affairs, meaning that one of the main objectives early in any contest is not to do anything stupid. Conceding a silly goal or committing a bad tackle can have massive consequences later in the game.

Of course, getting yourself sent off before the match has even kicked off isn't a great way to go about things either.

That was the fate that befell goalkeeper Jean Fernandes, who received a red card before the Paraguay Super Cup final at the weekend.

Named in the Cerro Porteno side to take on Olimpia, the player would be sent off before a ball was even kicked after the VAR official spotted him making a gesture towards the opposition supporters.

After bending down to leave rosary beads beside the goalposts, Fernandes can be seen holding his hands across his neck and gesturing towards the stand after having a number of objects thrown at him.

The officials deemed this to be a provocative move and sent the player off as a result. You can watch the incident below.

It certainly seemed a bit harsh.

Fernandes is on loan from Brazilian club Sao Paulo and has previously been capped by Brazil at underage level.

Speaking on social media after the game, he labelled the whole incident as a misunderstanding.

When I went to put my rosary by the side of the goalpost, something which I always do, the rival fans began to throw several things at me including firecrackers.

I reacted by making a gesture which in Brazil is normal. A player called Gerson celebrates like that. It’s called the ‘vapo’ gesture.

I don’t know what the ref thought but he ended up red-carding me. It was a misunderstanding.

While Cerro Porteno were allowed to replace their goalkeeper before the game kicked off, it did not stop them from falling to a 3-1 defeat. 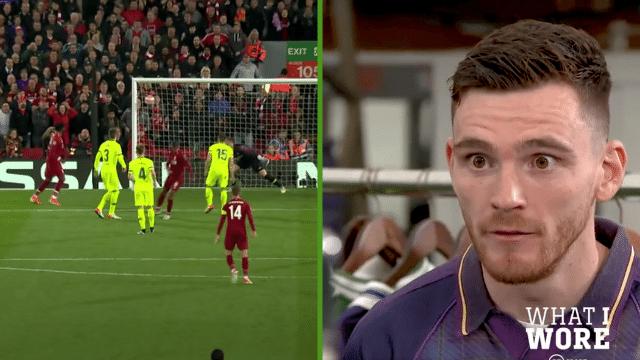 Football
4 years ago
By Ste McGovern
Last Night Showed Why South America Has The Best Qualification System In The World
Football
6 years ago
By Gary Reilly
GIF: Lionel Messi Made A Mockery Of The Paraguay Defence Last Night
27

Football
6 years ago
By PJ Browne
Vine: Jamaican Keeper Comes Undone When He Discovers That He Is Not Manuel Neuer
Previous Next