Amazingly, Graeme Souness Has Already Had His First Dig Of The Season At Paul Pogba

You'd think that, if there was ever a time Graeme Souness would lay off Paul Pogba, it might be in the aftermath of a game that saw him equal the Premier League record for most assists in one game.

Incredibly, Souness proved his doubters wrong on Sunday, by showing he still hasn't given in to the Pogba hype.

Pogba starred in Man United's blistering opening day win over Leeds, contributing four assists to a 5-1 win. The quality of his play was generally outstanding, and he drew praise from teammates, coaches, and pundits alike as he helped Man United to a perfect start.

Sky pundit Graeme Souness has had a long-established frosty relationship with Paul Pogba, and he upheld his reputation on Sky's coverage of Super Sunday.

Before the buildup to the afternoon's two games, the panel of Souness, Micah Richards, and Michael Dawson looked back on United's performance - and Souness refused to praise Pogba's contributions.

Souness: We have four title contenders. I think you have to include United in that. Looking at them yesterday they looked threatening, positive, they've got a bit of momentum, the crowd seemed to be with them, they've signed good players.

For me, yesterday, the star of the show was Greenwood, you know for a young boy I thought he was sensational.

Souness: We expect that from a 100 million pound man.

Souness 🗣 "For me, the star of the show was Greenwood."

Souness 🗣 "We expect that from a 100 million pound man."@MicahRichards not allowing Graeme Souness to forget Paul Pogba's performance against Leeds United pic.twitter.com/IvRPkHo6ir

It can't be denied that Pogba's time at Old Trafford has, at times, been less than smooth. The actions of his agent Mino Raiola, in particular, have frequently led pundits - as well as Man United fans - to question the Frenchman's commitment to the club.

Souness has been inarguably been the most critical of Pogba in the media. However, off the back of a stellar EURO 2020 for France, and a strong finish to last season, he is at least putting in the performances worthy of his stature at the club.

We can't say we expected Graeme Souness to fully join the Paul Pogba fan club off the back of his performance against Leeds but, if this Pogba continues to show up for United this season, it will be hard for the former Liverpool man to continue in this vein.

For Man United fans, the hope will be that Souness will be forced to change his line on Pogba sooner rather than later. 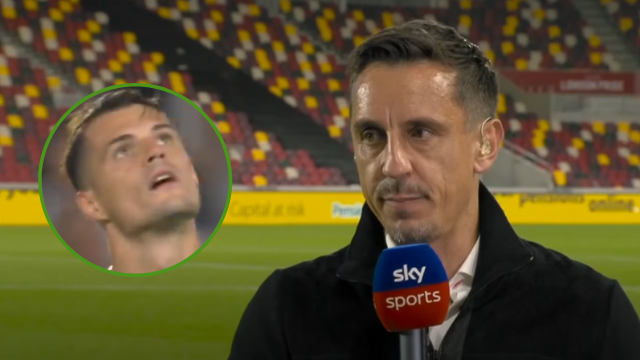 Football
3 weeks ago
By Eoin Harrington
Sky Pundits Disagree On Sadio Mané Red Card Decision At Stamford Bridge
Football
1 month ago
By Gary Connaughton
Beckford & Souness Disagree On Leeds Fans' Patience With Marcelo Bielsa
Football
2 months ago
By Eoin Harrington
'I'm Feeling Sorry For Them' - Roy Keane Slams Man United After Shocking Derby Performance
Popular on Balls
The Rewind
1 day ago
By Gary Connaughton
Quiz: From Which Irish County Did This Company/Product Originate?
GAA
7 hours ago
By PJ Browne
Insane Drama As Late TJ Reid Goal Sends Ballyhale Into All-Ireland Final
The Rewind
2 days ago
By Jonathan Byrne
The Story Of Meat Loaf's Tour In Ireland During The Troubles Is Remarkable
Football
6 hours ago
By Jonathan Byrne
Roy Keane Enjoyed Dig At Harry Kane For Referee Bias Being 'England Captain'