Where do Spurs go from here?

It would have been one thing to be absolutely outclassed by one of the top teams in the Premier League, but to capitulate in the fashion they did against their biggest rivals (who themselves are in the midst of a very poor spell) will not be taken well by the club's supporters.

They look like a team that lacks clear direction. Their best player wants to leave, while it is common knowledge that the man in the dugout was far from the club's first choice to come in as manager.

Nuno Espirito Santo looks to be struggling to get through to his players. It certainly wasn't clear what their game plan was this afternoon, something that has been a theme for much of the campaign up to this point.

Has he already lost the dressing room? While things have not gone that far just yet, Gary Neville believes it is clear that the Spurs players are not enjoying playing under their current manager.

Speaking on Sky Sports after the loss to Arsenal, Neville said that the Spurs squad have struggled to adapt to the managers that have come in since the departure of Mauricio Pochettino.

🗣"I think those players look like they want a high pressing Pochettino style coach."

I think they loved Pochettino. He was innovative, the rotation, style of play, front foot and proactive, they loved him. Those players adored him.

Those players to me look like they want a high-pressing, Pochettino style coach, who will play out from the back and get the centre backs on the six-yard line rather than one who sits behind the ball and counterattacks...

My point is that players can look like they're not giving it as much if they're not responding to the style of play of the manager.

However, Graeme Souness is not convinced that this explains Spurs' perceived lack of effort in recent weeks.

Going back to his own playing days, he said that the manager on the sideline made little difference to the effort he produced on the pitch. Despite this, Gary Neville said it can have an impact even if effort levels remain the same.

🗣"They look like a sorry group of players who feel sorry for themselves."

Graeme Souness doesn't shy away from his opinions on Tottenham Hotspur tonight pic.twitter.com/TcDMje2d4d

Souness: I don't get that. I played under Jock Stein, Bob Paisley, Joe Fagan, Alex Ferguson. They made no difference to my attitude when I came out and crossed that white line, I took it personal.

The words were immaterial to me. Maybe some players liked and needed it, but I didn't need it. I took it personal when I went out there...

Neville: I played for five England managers and there ones at times where it was a real struggle for the lads. We had a real struggle under some and others we responded to and were inspired by.

We were all good characters, we all worked hard and loved our jobs. I'm not questioning that and saying these Spurs players should go out and give less because they don't like the style of the manager.

But it is a fact. They don't look like they're enjoying it under the manager, do they?

Souness: They look like a sorry group of players who feel sorry for themselves.

The two would go on to argue about the presence of 'good pros' in the Spurs dressing room, with Souness hinting that Neville's definition of Harry Kane as a good pro to be wide of the mark.

Graeme Souness 🗣"I don't know what your definition of a good pro is." 🤣

It certainly looks as though things will get worse before they get better at Tottenham Hotspur. 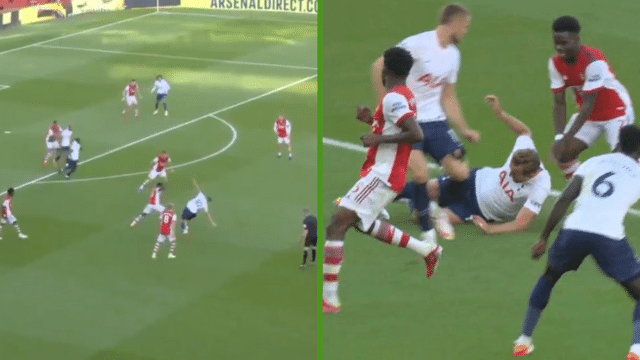