POLL: What Is The Greatest League Of Ireland Team Ever Put Together?

Before Dundalk beat BATE Borisov, we gathered together ex-players, ex-managers and football historians and posed the question - what was the greatest League of Ireland team ever assembled?

We didn't get any unanimity. Stuey Byrne argued for the Shelbourne team of the mid-noughties, as did our own LOI correspondent John Dodge.

Pat Fenlon insisted, even after Dundalk's exploits that night, that the Shamrock Rovers side that won four titles in a row in the mid 1980s were easily the best he'd seen.

Pat Dolan was adamant that the Cork City team that won the League in 2005 - and which was quickly broken up afterwards - was the best the League had ever seen.

While Peter Byrne took us back to the 1950s and the so-called golden age of League of Ireland football. The Shamrock Rovers team that won three championships between 1954 and 1959 (aka, Coad's Colts) were his pick.

We're throwing the question to the masses. Vote below in the poll to find the greatest League of Ireland team ever put together.

We're not 100% yet but we might insist that the polls close before Dundalk's next match so you've hardly any time.

Vote down the bottom. First, here is a rundown of the nominees. 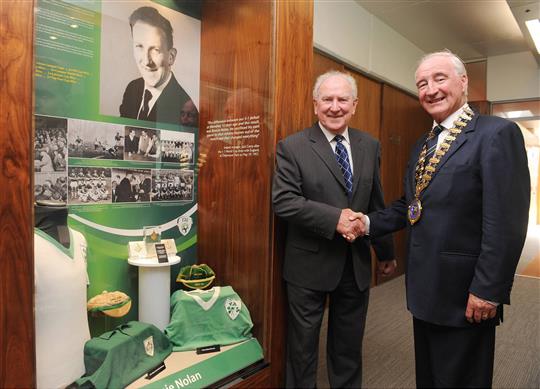 The Northside-Southside rivalry between Shamrock Rovers and Drumcondra lit up the era and the match-up was one of the most hotly anticipated sporting events in Dublin in the '50s. 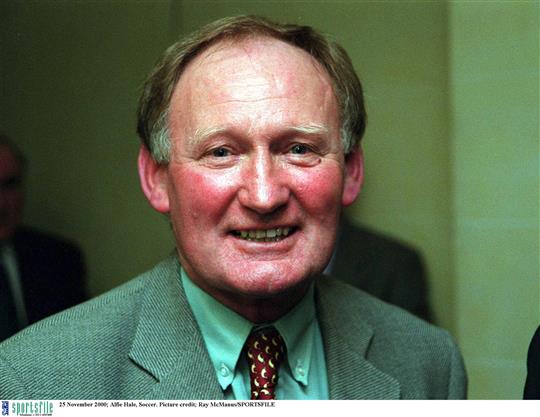 In 1970, they became the first Irish club to win a tie in the European Cup. They beat another team on the island, Glentoran, 4-1 on aggregate in the First Round. 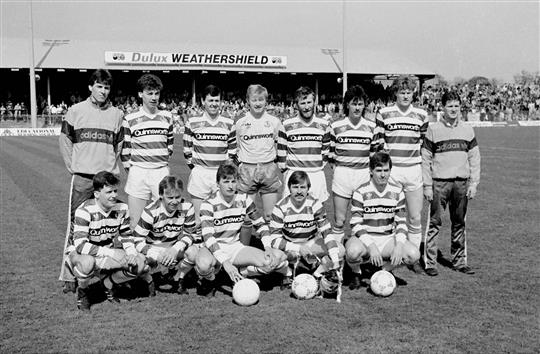 According to Pat Fenlon, the best League of Ireland he's ever seen. After the John Giles experiment failed, the Kilcoynes hired domestic football legend Jim McLoughlin as manager. He led Rovers to a period of incredible dominance at home. The final season of their four in a row run was the club's last year at Glenmalure Park before the sale.

Aside from a respectable defeat to Celtic in 1986, the club under-performed in Europe. They lost on away goals to Linfield in 1984, the only time an FAI team lost to an IFA team in European competition. 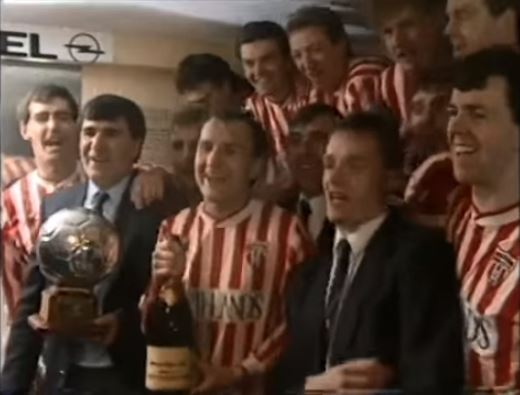 Not long after their entry into the southern league, Derry City won a historic treble in 1988-89. They were managed by Jim McLoughlin and boasted a couple of players from that Rovers team. 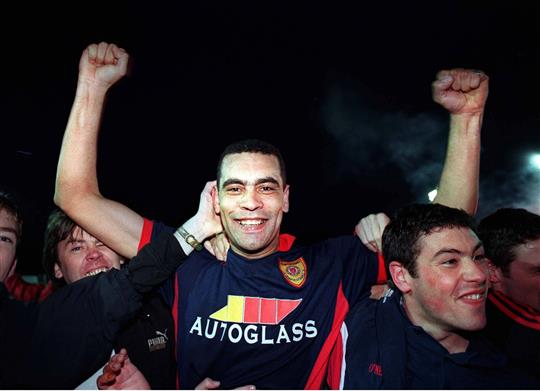 Won three League titles under three different managers in the late 1990s, St. Pat's emerged as the most successful team in what was a relatively democratic decade in Irish football.

Having already won the title with Pat's in 1990, Kerr won the first of the sequence in 1995-96 before moving along.

Pat Dolan was in charge for the remarkable 1997-98 victory, achieved on the final day of the season as Damien Richardson's Shelbourne blew it in Oriel Park.

Dolan stepped down very early on in 1998-99. Liam Buckley took over and led them to a second title on the spin.

Europe-wise, they managed a 0-0 draw in Celtic Park, before going down 2-0 in Richmond Park. The less said about the following year's European 'adventure' the better. 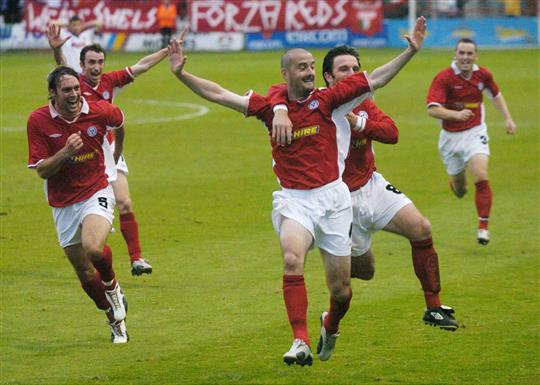 The dominant side in the first half of the noughties, Ollie Byrne's Shebourne collected five League titles altogether in the eight seasons between 1999-00 and 2006.

One of those was rather dodgy in that it came courtesy of a draconian points deduction for their nearest rivals but a win is a win.

Shels reached their zenith in 2004. They won a second League title in a row but more famously they came within one game of reaching the Champions League group phase.

They beat the relatively high profile Split in Tolka to set up a tie with the previous season's semi-finalists Deportivo La Coruna. After 145 minutes, it was still scoreless.

They managed to win a final League title despite trying circumstances and amid a financial collapse in 2006. 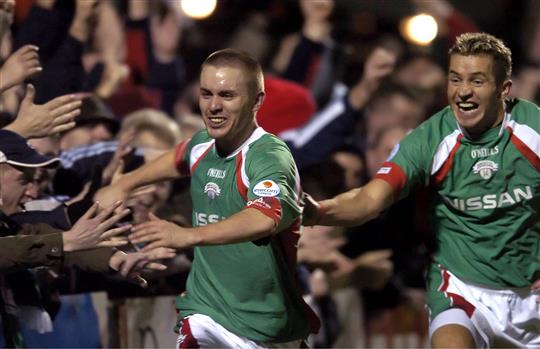 Only won one League title in 2005 before the team was swiftly broken up. Pat Dolan, who played a major part in assembling the side before stepping aside in advance of the championship winning season, spoke to us about the side a couple of months back.

I'm very clear. It's the Cork City team that won the League in 2005. Just look at the full internationals that played on that team, Kevin Doyle, Shane Long, Alan Bennett, Joe Gamble. And yet they weren't the best players. Probably the best players were John O'Flynn and George O'Callaghan.

I managed other teams that won the League. But that team was the best team. In every single position they had strength in depth and quality. It was just a new level to what I had seen in the League. They way they trained. Their professionalism. The way they conducted themselves. 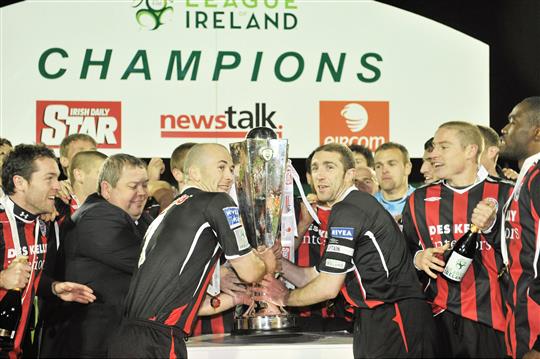 Boasted both the same manager and also a number of the players who'd brought Shelbourne to so many championship titles in the mid-noughties.

Bohs had been Shelbourne's biggest rivals in the early noughties collecting a couple of championships themselves. From that era, they retained legendary goalscorer Glen Crowe, adding players like Jason Byrne and Neale Fenn.

They were the primary beneficiaries of Shels' financial implosion, at least in the short term. They won the Double in 2008 and added another League title in 2009. They fell short against Red Bull Salzburn in the Champions League. 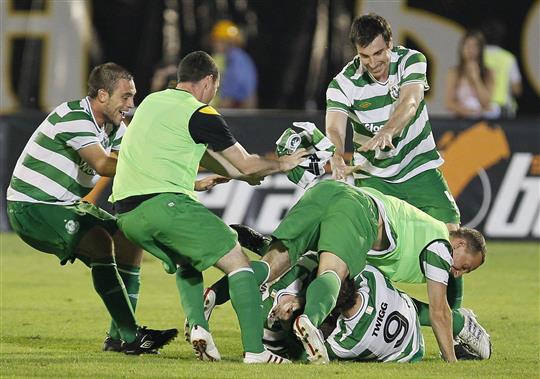 The following year, they regained their title but, more famously, they reached the group phase of the Europa League after defeating Partizan in the playoff round. 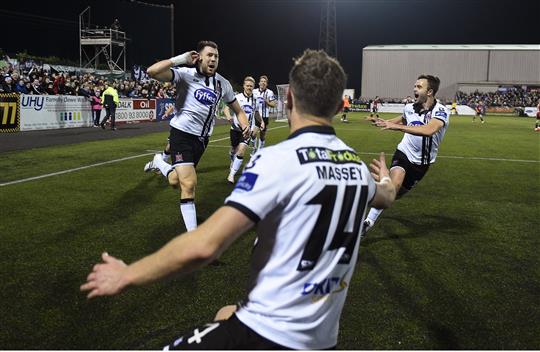 The reason this question is being posed. Four years ago they were relegation strugglers and had a memory of escaping financial collapse.

Now, they've become the first Irish club to complete three in a row since Rovers in the 1980s and have garnered international headlines with their Europa League run.

Read more: What Was The Greatest League Of Ireland Team Ever Assembled? - We Ask The Experts

Football
1 day ago
By Jonathan Byrne
'Quite Frankly, You're In The Drop Zone!' - RTÉ Chief Defends LOI Coverage
Football
3 days ago
By Andrew Dempsey
Bohs v Derry City Last Night Was Beautiful Madness
Football
1 week ago
By John Dodge
All 30 Men Who Have Played In The League Of Ireland And Gone To The World Cup
Popular on Balls
Golf
52 minutes ago
By Jonathan Byrne
Bryson DeChambeau Hit One Of The Most Audacious Drives In Ryder Cup History
Golf
2 hours ago
By Eoin Harrington
Shane Lowry Made A Brilliant Start To His First Ryder Cup Round
Football
4 hours ago
By Eoin Harrington
Ole Gunnar Solskjaer's Jab At Jurgen Klopp Doesn't Hold Up
GAA
4 hours ago
By Jonathan Byrne
Emma Duggan Caps Off Memorable September With Player Of The Month Award