Portugal and Germany played out the game of the EUROs so far on Saturday evening and, despite being on the losing side, Cristiano Ronaldo was the centre of attention in Didi Hamann and Richie Sadlier's post-match analysis on RTÉ.

In a thrilling game, Ronaldo initially put Portugal 1-0 up after a brilliant counterattack.

He was once again in the spotlight moments later, for a very different reason. As the ball dropped, Ronaldo pulled off a stunning piece of skill to lift the ball over German defender Antonio Rudiger and find Bruno Fernandes with a backheel flick. To top it off, he turned and looked away as he passed the ball to Fernandes.

It was a stunning moment of skill from Ronaldo, but Richie Sadlier and Didi Hamann in the RTÉ studio had a fierce discussion on whether or not it was advisable for Ronaldo to even attempt the flick.

Sadlier presented his case in his post-match analysis, suggesting it was a brilliant moment of entertainment that lit up the game - before landing a sly dig on Hamann.

Surprisingly, it has divided opinion. When I saw this first, and saw the replay, I thought 'wonderful moment', nice bit of skill, over the head of Rudiger, backflicks it to a teammate, keeps the run going. And, for added entertainment, he looks away - a little no-look pass.

I thought most people like the game and appreciate that. But the German sitting next to me is sucking the life out of the studio - 'there's no room for that, stick to his job, should have been more professional, that doesn't belong in football'.

The two were then locked in a fierce debate for several minutes, as Hamann suggested that the flick from Ronaldo may have given the Germans an extra motivation to claw their way back into the game.

Sadlier: I don't think anyone is looking at him thinking 'he's a fool'.

Hamann: If you ask the German players after the game what they thought of it - because they would have noticed that - I tell you know that all of them would say 'it may have given us that extra little bit of whatever to change things around.' I know that it's entertainment...

Sadlier laid his case that Ronaldo had lost nothing from attempting the skill, and that Portugal's issues in defence and midfield in their ultimate 4-2 loss were far more pressing issues to address.

If it ended up in losing possession and these showboats trying to entertain the crowd, or a little bit of posing, led to a move breaking down or the team under pressure, I'm onboard going 'that's costly' - but he found a teammate who found another one.

What has he achieved that's negative? Ronaldo doing that flick was the least of Portugal's worries today.

The way Portugal defended...the midfield was so open, the right back looked like it was the first time he'd ever played right back. I don't think in the list of faults of this Portuguese team that what Ronaldo did there even makes the top 10.

It was a fascinating debate, and host Jacqui Hurley did well to allow the conversation to flow between the two.

Though it was a heated debate, Hamann did accept that the skill was not only highly impressive, but maintained that he believed the moment would have spurred on the Germans.

I just think that...I know that people wanna be entertained, the kids love their showboating.

You've got to think about your team - and, obviously, I'm not criticising him now. He's won the Champions League umpteen times and he's done everything.

I just think that...nobody will tell him because I don't think anybody in this team can say it to him with what he has achieved. I just don't get it what he's trying to achieve apart from...yes, showboating, maybe entertaining the crowd - I think in a way it's disrespectful to the opposition.

If a German player does this, he'll be told at half-time 'leave this nonsense out, we're here to play a game and we want the best for the team'. You don't even give the opposition the idea of disrespect.

In fairness, if anyone was to know the mentality of a German team, perhaps a man who played in a World Cup final for the national side might be a good source to trust. Whatever it was that spurred the Germans on, they did suddenly come to life late in the first half, and ultimately ended up running out 4-2 winners in a thrilling tie in Munich.

The closing words went to Sadlier, who drove home his point that, in such a big game, Ronaldo's moment of skill was simply another addition to the entertainment on show, from one of the best players of his generation.

Games like this that are so tense and big, the world is watching...

We certainly weren't expecting such a vociferous debate on Ronaldo's "showboating", but Hamann's point may well stand up when you look at the German performance for the rest of the game. 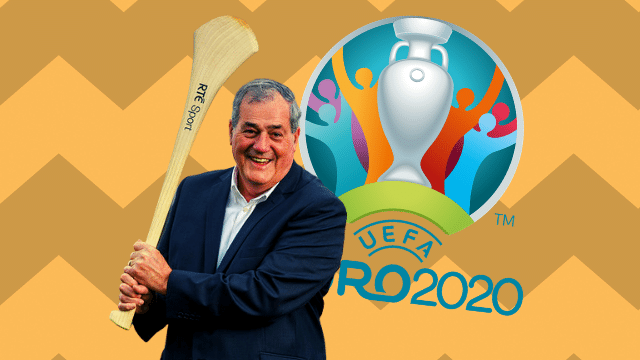 Football
6 days ago
By Eoin Harrington
Report: Manchester United's Younger Players Are Growing Tired Of Cristiano Ronaldo
Football
1 week ago
By Gary Connaughton
Rio Ferdinand Defends Cristiano Ronaldo After Brentford Tantrum
Football
4 weeks ago
By Jonathan Byrne
Gary Neville Points Blame At 'Whinging' Duo After Man United Draw
Popular on Balls
Rugby
2 days ago
By Colman Stanley
Keith Earls Shares Story That Captures Andy Farrell's Decency
Football
1 day ago
By PJ Browne
'If He Continues With Performances And Goals Like That, Stephen Kenny Will See It'
Football
2 days ago
By Eoin Harrington
Quiz: Name Every Player To Score In A Champions League Final
Football
20 hours ago
By Gary Connaughton
Portsmouth Likely To Retain Gavin Bazunu This Month Despite Championship Interest