What Happens Teams That Enter The League Of Ireland First Division?

The SSE Airtricity League season starts in 2 weeks and Cabinteely FC are the latest club to join the First Division. It was first established in 1985 and ushered in the League of Ireland’s first major expansion. 6 teams were added to help create the new two-division league (4 teams were relegated). The year previously Cork City and Longford Town were added so the league jumped from 14 to 22 clubs in 2 years.  Since then a further 10 teams have entered the First Division (not including the Zombie* clubs of Cork, Derry, Limerick or Galway).  Some have been more successful than others. We set out the history of all 15 First Division entrants below. 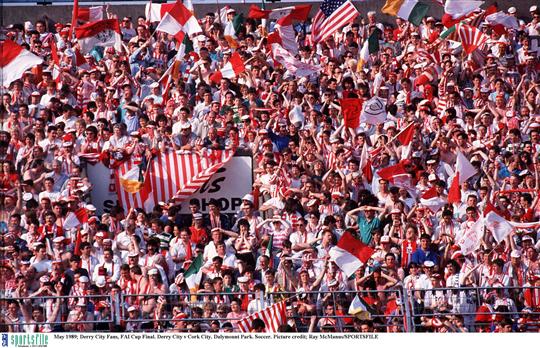 Undoubtedly the biggest club to enter the league through the First Division, Derry’s rise to prominence in the LOI was almost immediate. After leaving the Irish League in 1972, Derry entered the LOI with a huge amount of fanfare.  With a huge support, they won the (now-defunct) First Division Shield in the first season, the Division title (and promotion) in the second season and in their 4th season they won the treble of League, FAI Cup and League Cup.  Those huge crowds haven’t stayed but Derry have added 1 more league title, 4 more FAI Cups and a staggering 9 more League Cups. Derry’s only other first division season was as a Zombie* club in 2010. They won their 2nd First Division title.

The first ever First Division was won by Bray Wanderers.  They weren’t the first club from the Wicklow town to play LOI football as Bray Unknowns played 19 seasons from 1924/25 to 1942/43 (with little success.  They’ve won the First Division 3 times in total and in 1990 were the first club to win the FAI Cup/First Division double (adding another FAI Cup in 1999).  They’ve been in the news recently but look set for another season in the Premier 2015.

The first Cork based LOI team not to play in the city, Cobh Ramblers time in the LOI has been more steady than spectacular. Perhaps best known for giving Roy Keane a senior debut, they have won promotion 3 times, including winning the First Division in 2007 under Stephen Henderson. They only lasted the 2008 season before, in 2009, becoming the first club to be outright denied a licence (Zombie* clubs excepted). After playing in the A Championship, Cobh made a welcome return to the LOI (proper) in 2013.

Newcastle United became the second team from Limerick to join the league in 1985. They played their first season as Newcastle United before changing to Newcastle West for subsequent seasons.  They stayed for only 5 unremarkable seasons with only some shock cup wins making their mark. They returned to the Limerick Desmond League and have remained their ever since. 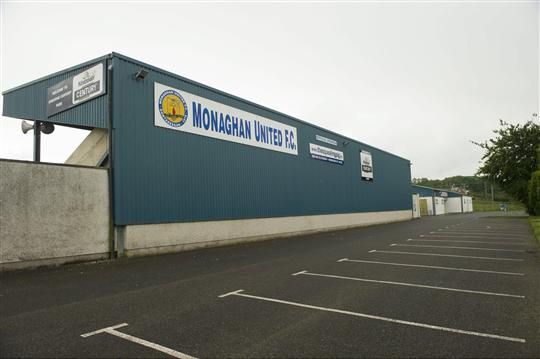 The youngest club to enter the expanded First Division in 1985 (they were set up in 1979), Monaghan had to play 8 seasons in the FD before winning promotion; winning the first ever promotion/relegation play off against Waterford United.  They won promotion twice after that but never won a trophy in the LOI. They folded midway through the 2012 Premier Division season under Roddy Collins.

EMFA (an amalgam of Emmet Street and Fatima Avenue) was the pet project of Jim Rhatigan and under his stewardship moved up ranks to LOI football in 1985, finishing bottom of the league that first season. In 1989 they changed their name to Kilkenny City. In 94/95 they completed the worst ever FD season losing 25 of 27 games and finishing on 2 points. Only 2 years later they won the FD title and promotion. Another promotion came in 2000 but both PD stays only lasted one season (and each season saw the league clinched in Buckley Park).  In 2007 they finished bottom of the FD and decided not to apply for league membership for 2008.

After Newcastle West pulled out in 1990, the league looked for a club to step and fill the gap. No provincial clubs wanted in so they looked to Dublin. First ever LOI winners St James Gate re-entered the league having left in 1944 (with 2 league titles to their name). The Guinness backed, Crumlin-based club spent 6 seasons in the First Division. Their last season was under new management who moved the club into Tolka Park and invested in the team looking for promotion (future international Dominic Foley signed). When they finished 5th, they packed it in and left a bit of debt behind them. The Gate reformed as part of the Guinness sports clubs and re-entered the Leinster Senior League. 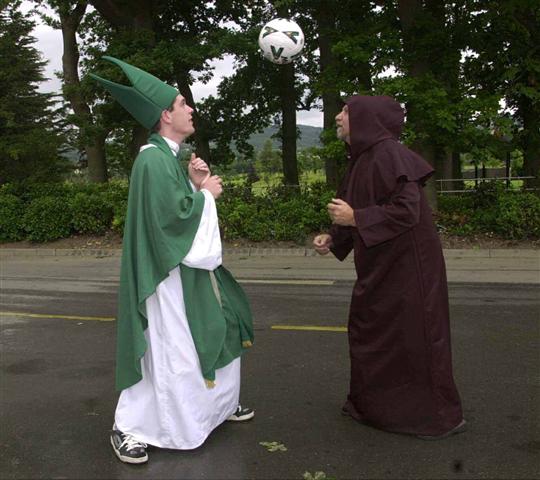 To replace St James Gate up-stepped another Dublin club St Francis. They had reached the FAI Cup final in 1990 and manager Pete Mahon was still around to see them enter the LOI.  Originally from Dublin’s Liberties, they played games in the west of the city at John Hyland Park in Baldonnel.  In 1999 they began to use the Fingal St Francis name (despite not playing in Fingal...). Before the start of the 2001/02 season, a merger was proposed with St Patrick’s Athletic and St Francis pulled out of the league with no time to replace them. The planned merger eventually broke down and St Francis reformed in the Leinster Senior League.

In the confusing world of LOI club originans, Dublin City may be up there with the murkiest. Some will claim that it was just a re-branding of Home Farm. Others will point to the 2 years as Home Farm Fingal  in the late 90s as the start of this new club. We’re going with 2001 and Dublin City’s entry into the league as a new club. The gimmick with Dublin City was the name which chairman Ronan Seery hoped would unite the capital in a bid for a European super league spot. Their merchandise deal with Carroll's Gift Stores certainly gave them visibility but the public didn't really care. They played home games in Whitehall, Richmond Park and finally Dalymount Park. They earned promotion twice, the second time beating Shamrock Rovers in a play off at the end of 2005. Halfway through the 2006 season they folded and LOI fans were introduced to the word expunged.

The first non-Dublin team to join the league since 1985, Kildare County emerged from Newbridge Town. Having seen what happened to St Francis, Newbridge members insisted the new club be set up separately with many of the same people involved. Immediately in the hunt for promotion, Kildare County never quite managed to get up despite being competitive until 2007. In 2008 they lost the first ever FD/A Championship relegation/promotion play off (to Mervue) but survived in the league thanks to Cobh not being awarded a licence. The following season they again finished bottom but pulled out of the play offs and the club folded.  Their most high profile appearance wasn’t football related.

Mick Wallace was looking for ways to extend his successful rein with the Wexford underage teams. No stranger to LOI football, he set up Wexford Youths in 2007 and they’ve remained in the league ever since.  They hosted the League Cup final in Ferrycarrig in 2008 but haven’t had too much to shout about since. Last season saw them lose out on a play-off spot on the final day and hopes are high that this year will see them mount their strongest promotion challenge yet. 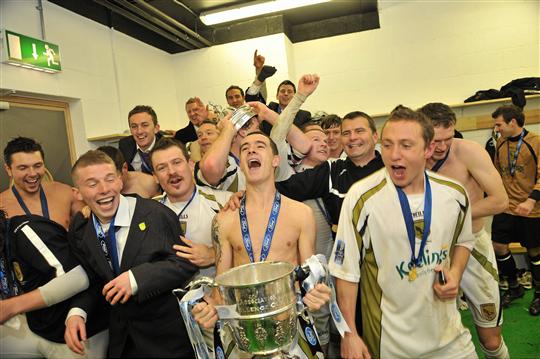 Set up with the help of Fingal County Council, Sporting Fingal were scheduled to join the A Championship for the 2008 season. When Kilkenny City pulled out of the league, they entered the FD instead. With a budget that could have competed in the top league, Fingal finished 4th in that first season. The following season they won promotion through the play off (beating Shelbourne and Bray) before dramatically winning the FAI Cup with 2 late goals against Sligo Rovers. Manager Liam Buckley guided them to 4th place in the PD in 2010 (European qualification) before it all went dramatically wrong.   Benefactor Gerry Gannon pulled out and the County Council were no longer willing to fund it. Fingal ceased operations a month before the start of the 2011 season.

Mervue United joined the inaugural A Championship in 2008. That November they beat Kildare County to become the first team ever to win promotion to the FD. They finished 11th in their opening 2 season but made steady improvements the following years. In their last season they finished 3rd and entered the promotion play off (losing to Longford Town). They left the league in 2013 to make way for the new, unified, Galway side.

A year after Mervue won promotion, Salthill Devon won promotion without evening kicking a ball in their play-off against Kildare County (who withdrew from the league). Salthill Devon had a terrible time in the league and finished bottom each year. They played one year as SD Galway in Terryland Park but the general public of Galway weren’t fooled. They can easily lay claim to being the worst LOI club of all time. They left the league, with Mervue, after the 2013 season to facilitate the zombie Galway FC club coming into the league as the sole Galway representative in the league.

The A Championship ran between 2008 and 2011. It was replaced by the under 19s league but there was a gap between those sides and senior teams. Desperately needing a 20th league club with the Galway contingent being reduced,  the FAI and Shamrock Rovers agreed that they would enter a team in the First Division for 2014. Their chairman spoke about the development as a necessary step in producing top class players . The biggest grumble for existing clubs was the ability of Rovers to play up to 3 firs team squad members. In reality this happened very rarely during the season After just one year, the club decided to discontinue the team. They finished a respectable 6th of 8.

You will have read several mention of Zombie clubs in this article (and other LOI articles on balls.ie). This refers to existing LOI clubs who have, for different reasons, ceased to operate in the league but are replaced by a club with the same name (eventually). In 2007 Limerick FC were refused a licence. They were replaced by Limerick 37 who changed names back to Limerick FC in 2009. The new club considers the history of the old club as theirs.  At the end of the 2009 season both Cork City were wound up and Derry City folded. Derry's new club immediately assumed the Derry City name. Cork's first few months were played as Cork FORAS. Galway United were refused a licence in 2011, and exited the LOI. In 2014 a new team called Galway FC was created with input from all the Galway clubs, FA etc. They won promotion and renamed themselves Galway United for 2015.  Fans on these clubs consider them to be a continuation of the same clubs.  For the purpose of this article, they clearly weren't "new" entrants to the league so the Zombie clubs moniker applies.

We wish Cabinteely FC all the best!