Harry Arter took a bold move to leave high-flying Bournemouth and go out on loan in search of more first-team football. He found it at Cardiff, where he has enjoyed an impressive season so far.

The Republic of Ireland international quickly became a fan favourite for the Bluebirds and has been a vital cog in their team as they continue to engage in a tight relegation battle. As he explained recently, he quickly became 'ingrained' in the club.

"I looked at this season as one where I wanted to experience something new but when I got within the club, I felt so ingrained with it."

Arter has started 24 games for the Premier League club this season and has a passing accuracy of 80.4%, but it turns out his passing ability is actually leading the league in one category.

Analytical site StatsBomb have done an outstanding breakdown of the league in its entirety and 'pass footedness'.

As it turns out, the most two-footed passer in the league right now is Harry Arter, who leads the way ahead of Wolves midfielder Diego Jota.

We can see that although Arter doesn’t make a ton of passes (around 25 per 90), there’s a fair split between each foot. He also completes passes at the highest rate for his team at 78%. No player in the league comes close to his 48% : 52%, left to right split (sounds familiar…) and his range of mid to long passes forward with either foot have been a useful pressure release as Cardiff looked to remain in the Premier League this season. 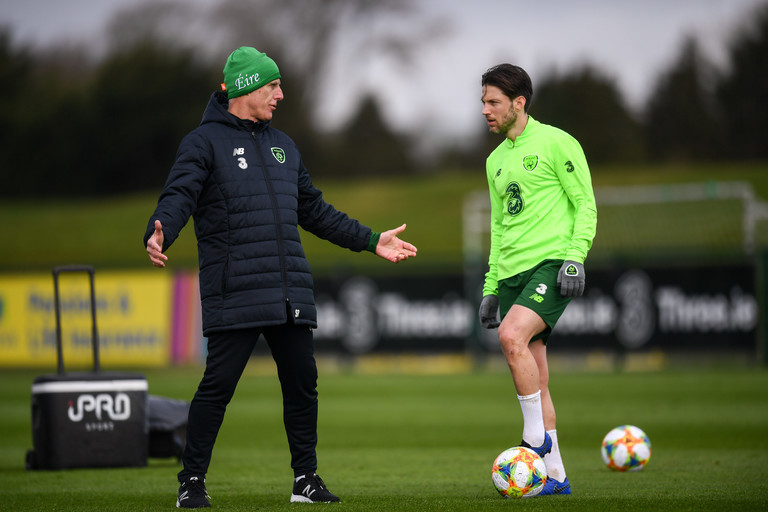 It's a stat all the more impressive given the style and pressure involved in Cardiff games.

Arter was on the bench for Ireland's recent 1-0 victory over Georgia but spoke positively of working with the new boss last month:

"It's nice to learn from someone who has been around the game for such a long time and even in my first chat with the manager on the phone, you get a sense that he is someone you want to work for."

His passing skill-set is clearly something Ireland could utilise, especially in a 4-5-1 system.

Yet as far as Mick McCarthy is concerned, the formation moving forward will not be fixed. He told Balls.ie 4-5-1 certainly has its advantages earlier this week:

Some chump said to me: "you got to get two up front". Fucking hell. We played two up front in Gibraltar and had hardly any shots. We played three against... we played one up front, well, three up front we played here. We had far more chances and played better.

It was just a different game, one team sitting in and making it hard, the other team we had pressing. Who knows where they're going to fit in.

The full StatsBomb analysis is available here and well worth checking out.