Premier League officiating is again going to be heavily scrutinised once again this week as referee Paul Tierney made what appears to be a very poor decision regarding Ireland midfielder Harry Arter.

The challenge took place in the first half of Bournemouth's clash with Stoke City, and Joe Allen, the victim of the challenge, was very lucky to not be seriously injured.

Footage is extremely scarce at the moment, but from the following blurry screenshot you can see that both feet were off the deck, and he's gone over the ball. 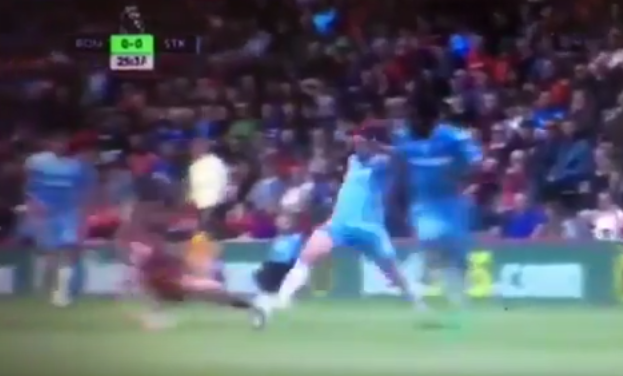 He came in very fast and was out of control. Regardless of any contact with the ball he should have been given his marching orders.

The 'oohs' and 'aahs' of the BT Sport panel watching the game prove that it was a nasty one.

"Should have been a red" - Harry Arter is lucky to still be on the pitch at Dean Court, according to the #BTSportScore panel. pic.twitter.com/olNz3mGYLx

As does the reaction on Twitter, where fans who saw the challenge were not impressed at all.

Amazingly Harry Arter is still on the pitch after a horror tackle on Joe Allen. There's not one good ref in English football.

Harry Arter in two footed lunge shocker. How he hasn't been sent off numerous times this season is beyond me and he's got away with it again

I like Harry Arter but that's a straight red #afcb

Harry Arter is always in the ref's ear, never liked him at all. Always gives it the biggun', did so at the Brit. Coward's tackle, that.

Harry Arter nearly snaps Joe Allen in half. Gets a yellow. Get money on Arter scoring the winning goal, now...

Just seen Harry Arter's challenge on Joe Allen. Shocking, what on earth was the ref thinking giving him a yellow card? ? #BOUSTO

Just seen the Harry Arter tackle. That was appalling. Should have gone off for that. Leg breaker #AFCB

Absolute bastard of a challenge from Harry Arter there. Very lucky to get away with a yellow. #BOUSTK

The irony of the whole situation is that Eddie Howe had been publicly speaking before the game about Arter's improved discipline, despite the midfielder having the second most amount of yellow cards in the Premier League this season.

There's no defending it, a shocking challenge from Harry Arter.