Football, it seems, does not believe it should incur the scrutiny of other sports.

Last month, for example, Manchester City, were charged with anti-doping offences (they failed to properly inform anti-doping officers about the whereabouts of their players three times over a 12 month period), and it was discussed very little, bar the original reports.

The Daily Mail revealed last weekend that Saido Berahino served a ban for failing a drugs test at West Brom. Berainho served an eight-week ban having tested positive for a recreational drug.

It is instructive of the level of omerta that Mark Hughes felt he could openly talk of being disappointed at the story coming out.

It is evident in other realms, also. The issue of concussion was raised during Chelsea's defeat at Arsenal, and football pundits across British channels showed themselves to be utterly ignorant of the problem.

As rugby and American football belatedly take measures to address the issue, Good Football Men remain chained to the broadcasting version of  Plato's Cave: interminably and pointlessly reviewing the performance of referees and arguing over red card decisions and handballs while the real issues linger in the background.

The reaction to Hector Bellerin's concussion at Chelsea at the weekend was flabbergasting but instructive. 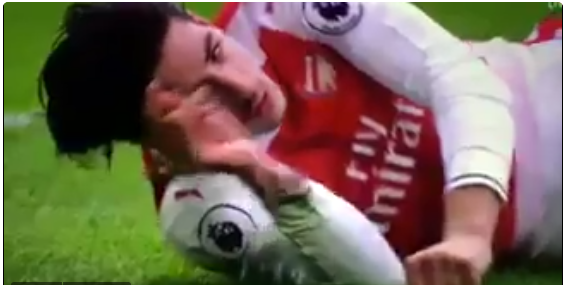 Bellerin was smashed in the face by Marcos Alonso as the Chelsea player followed up to score the opening goal, with Bellerin lying motionless on the ground as Alonso wheeled away in celebration. Arsene Wenger said afterward that it was a foul, and that Bellerin had not remembered the result of the game.

Was he knocked out? He didn't know the result of the game at the time.

Yet Wenger, as per usual on important, longer-term issues for football, found himself shouting into a void.

The idea that this would not be a goal, that we would be denied this perfect confirmation of the narrative surrounding Arsenal simply not being aggressive enough, was barely discussed and never argued.

Gary Neville was on co-commentary, and while he admitted that he had "a little sympathy" for Bellerin, he disabused any concerns viewers had of the likelihood of concussion, with Neville saying that it was probably more a case of Bellerin being winded by falling flat on his back, rather than a head injury. Martin Tyler gave thanks that the incident was not as serious as the clash of heads that fractured Ryan Mason's skull.

Neville also said that Alonso "did the right thing" by going through Bellerin in order to score.

Granted, the demands placed on the co-commentator to react instantly and coherently to what he sees before him is difficult, but there was no excuse for Neville's colleagues at half-time.

Graeme Souness said that the foul was perfectly fair as both players "only have eyes for the ball", and Thierry Henry, while hoping that Bellerin was ok, said that it was a fair challenge.

It was the same on the BBC. Gary Lineker put it to Alan Shearer that Arsene Wenger believed it to be a foul, but for Shearer to scoff at the idea. "Never a foul, it's just aggressive".

The most jarring nonsense came from Danny Mills. He is no stranger to overreactions (he said that Luis Suarez should be "thrown in jail and locked up forever" after biting Georgio Chiellini) and the ludicrous assertion that "Bellerin has to be stronger there" as Alonso's forearm knocked him unconscious belongs in such hyperbolic and deluded company.

All seemed to believe the goal should have stood as Alonso didn't intentionally set out to give an opponent a brain injury. Of course, there was no intent on Alonso's part, but that does not mean it wasn't a foul. The rules pertaining to a foul do not require intent, with fouls awarded for careless, and reckless play.

Many pundits have finally come around to the fact that wild slide tackles can result in red cards for being reckless, rather than intentional, yet somehow, the two most popular broadcasters of the Premier League decided that a challenge to the head did not warrant such analysis.

All the more galling is the fact that this incident comes two weeks after Ryan Mason left the same pitch with a fractured skull. That incident was accidental and came down to a clash of heads, yet the football community were quick to be seen to be paying tributes to Mason, as he fought a hideous injury.

While those tributes are kind, they are empty gestures if the idea that a player being knocked unconscious by an elbow a couple of weeks later should not even warrant debate.

Like most things in football, it may take something serious to wake up to the problems in front of them. For too long ignorance has been the dominant form of knowledge.

See Also: The Twitter Hint Which Seems To Clear Up Robbie Keane's Future

Football
3 weeks ago
By Gary Connaughton
What If: Cristiano Ronaldo Signed For Arsenal Over Manchester United In 2003?
2