Ireland have risen 8 places to 52nd in the FIFA World Rankings, but we still go into the qualifying for the 2018 World Cup ranked in Pool 4, and a very tricky draw could await for the Boys in Green.

The potential 'group of death' includes three teams from our current Euro 2016 Qualifying Group, where we are placed fourth with 9 points. World Cup holders Germany could be drawn for a third successive qualifying campaign, and we could also meet current group D table-toppers Poland again.

France are in pot 2 for the draw and could also be included, at which point even the most optimistic of Irish fans can start making alternate plans for the summer of 2018.

Old foes Cyprus could also be drawn and they've taken 9 points from a European qualifying group that includes Wales, Belgium, Israel as well as Edin Dzeko's Bosnia and Herzegovina. Georgia complete the group, who we needed some last-minute Aiden McGeady magic to edge past last time. 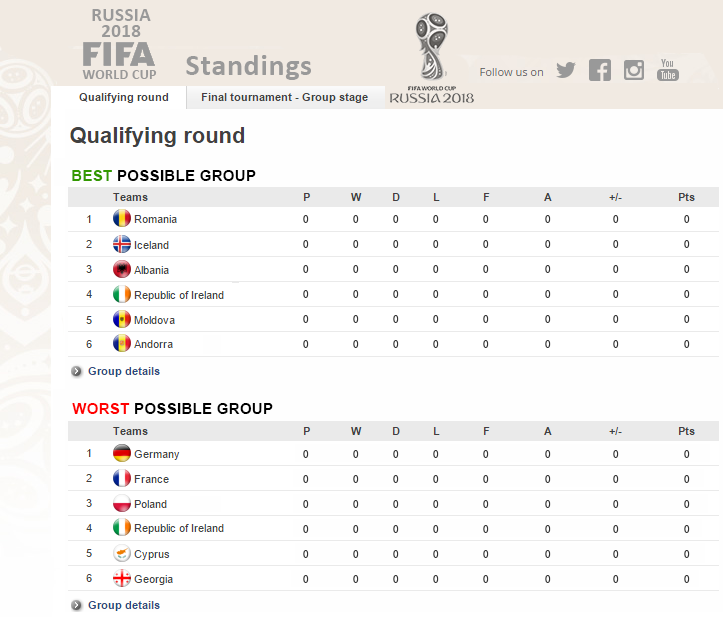 The kindest group to Ireland still holds some difficult ties and would require a strong Irish campaign to emerge from, but it's a long way from the potential group of death.

Romania are among the top seeds, but that's mostly because they're top of a weak European Qualifying Group F where the Faroe Islands have earned 6 points (and now join us in Pot 4). Iceland are favourable in a strong pot 2 on the basis that Eidur Gudjohnsen will probably be retired by the time the campaign begins in 2016.

Albania are the best draw from Pool 3, while with a bit of luck we could get minnows Moldova and Andorra from Pool's 5 and 6.

The draw for the European section of World Cup 2018 qualifying takes place on the 25th of July. It's the first time Ireland are seeded in Pool 4 since Jack Charlton's side qualified for Italia 90, lets hope that's a good omen.