Irish Tournament Tales: The Time An FAI President Was Detained By Italian Police For 4 Hours

On Sunday 24 June 1990, the FAI President-elect, former Shamrock Rovers chairman, Louis Kilcoyne was detained by Italian police and questioned in a van for up to four hours outside the Stadio Delle Alpi.

FAI translator Mary Hunt was simultaneously lifted and questioned for a couple of hours, being told she could face charges.

A thread on Kilcoyne's passing on Politics.ie contains hostile comments which repeat the allegation that he was touting tickets in Turin in 1990. 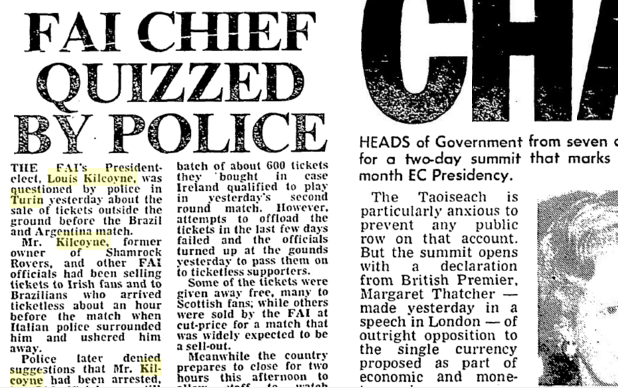 However, this is not true. The real story is even more bizarre, although perhaps no one with a familiarity with Italian politics or law enforcement would be unduly shocked.

Argentina had stumbled in the group phase against Cameroon and Romania and were thus assigned to face Brazil in Turin rather than meet the Group F runners-up (Ireland) in Genoa.

Given the uncertainty surrounding where Ireland would be playing in the round of 16, the FAI had to buy tickets for games in Bologna, Milan, Turin and Genoa.

They successfully offloaded the Bologna and Milan tickets but couldn't get shot of the Turin tickets. The Irish Independent reported that the local organisers wouldn't take them back.

Not unreasonably, they sought to swap their Turin tickets in exchange for some Ireland-Romania tickets for the following day. Kilcoyne and Mary Hunt headed for Turin.

Tony O'Neill told the Irish Independent that 'we were looking at a significant financial loss if we didn't sell the tickets and that is why the official party were outside the stadium'.

Gary Spain, long-time Ireland fan - who has also spoken to us at length about the fan experience at USA 94 - was the man who inadvertently got Kilcoyne arrested.

In Italia 90, the mafia ran the ticketing.

I was actually the person he was selling the tickets to for Brazil-Argentina in 1990. It was the day before the Romania match in Genoa. The touts were looking for £400 at the time, which was an absolute... it was thousands in today's money.

There were hundreds of Brazilians and a few Argentinians outside looking for tickets. This was about four hours before kick-off. We met Louis Kilcoyne and Mary Hunt.

I said 'Louis, have you any tickets?'

He said, 'I've 400 tickets', he says, 'but I want to swap them with the Argentinians.' Because Argentina could have been in our game against Romania.

And I said 'look, can you sell us two tickets, we're Irish.'

So, he comes back out half an hour later. He says, 'the Argentinians don't want any tickets.'

Far from touting tickets and making a killing, Kilcoyne wasn't even selling the tickets at face value never mind at an inflated price.

Touts were roaming free all around the stadium, flogging their tickets at extortionate rates. But Louis it was who fell foul of the authorities.

The mafia were a touch irritated by this Irishman muscling in on their turf with his uber-competitive prices.

The police knew who they were supposed to serve.

Now, there were touts openly working everywhere. The police came over and lifted him and held him for four hours in a van.

Because he was going to screw the tous and the mafia. The police were protecting the mob.

The story that the duo were touting has sometimes been perpetuated by those angry at Kilcoyne for other reasons. The FAI lodged an official complaint to the Italian Justice Department.

Read more: How Irish Fans Shocked The World And Filled The Giants Stadium For Ireland-Italy '94

Football
1 month ago
By Balls Team
Where Are They Now? - The Ireland Fans At The Walkinstown Roundabout In 1990
Previous Next

Football
3 weeks ago
By Maurice Brosnan
How Jack Charlton Gave Football Fans A Boost When They Needed It Most
Football
3 weeks ago
By Gary Connaughton
Jack Charlton's Pope Quip After World Cup Exit Has Become The Stuff Of Legends
Football
1 month ago
By Balls Team
Where Are They Now? - The Ireland Fans At The Walkinstown Roundabout In 1990
Popular on Balls
The Rewind
18 hours ago
By Paul Moore
Liverpool Fans Absolutely Loved Channel 4's Documentary on Jurgen Klopp
Football
16 hours ago
By Jonathon Lynam
'He’s Like A Centre Midfielder With The Ball At His Feet'