How History Shows That Tonight Is Uncharted Territory For Ireland

Tonight makes a change. Ireland have to navigate an all or nothing qualification in front of their own crowd.

Ireland's final game of Euro '88 qualification was at home to Bulgaria, played in front of an underwhelming crowd of 26,000. Large chunks of grey concrete were visible on the terraces. In a country that fixates on 1-1 victories, the performance was a revelation. Ireland played brilliantly, winning 2-0 thanks to goals from Paul McGrath and Kevin Moran. Liam Brady, recently returned to London, was sensational in midfield before his late sending off for retaliation to a bad tackle.

No one suspected that it would be enough to take Ireland to the Euros. Following the game, Ireland did sit top of the table but this was thought to be merely an accident of scheduling and sure to be temporary.

Bulgaria still had a game at home to the eliminated Scots. They hadn't lost at home in six years.

The day of the game against Bulgaria, the Irish Times wrote this in their preview.

Despite protestations to the contrary, officials acknowledge that the prospects of the Irish surviving the preliminaries have dwindled to almost nothing. To do so, they must win today; Scotland must take at least a point from Belgium at Hampden Park this evening, and then, most unlikely of all, the Scots must extract full points from their visit to Sofia on November 11th.

We know what transpired a month later. Jack Charlton was sitting in a farm in Shropshire watching Scotland play Bulgaria (or Romania, he was never sure on that) when someone picked up the phone and congratulated him on qualification. Bemused, he told the man on the other end was 0-0. Sure, wasn't he watching it.

For Italia 90, Ireland relatively trouble free qualification campaign was concluded with a routine 2-0 win over Malta in the village of Ta'Qali. Qualification was already a probability a four successive home wins in the summer of 1989, over Spain, Malta, Hungary and Northern Ireland.

In 1993, they did secure qualification on this island, but there is no way this match could be confused with a home tie. Enough has been written about that night in Belfast.

During the Mick McCarthy era, Ireland always played the first match at home. They sealed victory in the last of these in the monstrous Azadi Stadium in Tehran. The natives reacted to Ireland's imminent aggregate victory by setting fire to the terraces.

Ireland had no more than a 1,000 supporters in attendance, a percentage of them being female. The Iranians, usually opposed to the presence of women at sporting events, permitted the Irish women to attend on the grounds that they didn't speak Farsi and thus wouldn't understand the swearing of the Iranian men. However, no attempt was made to protect these women from Irish swearing. 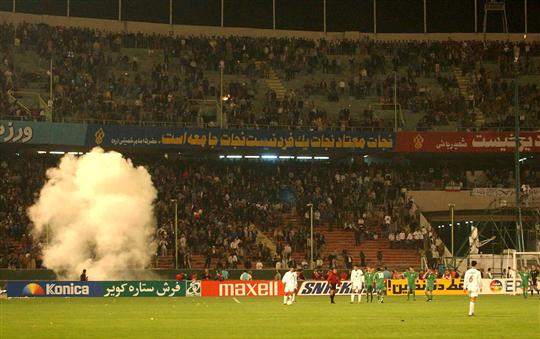 The only time that Ireland ensured their qualification at home was for Euro 2012, and that was effectively guaranteed in the away leg.

Qualification was merely rubber stamped that night at the Aviva Stadium.

Tonight, for the first time, Ireland face into a do-or-die qualification match in Lansdowne Road with the tie still in the balance. This is interesting terrain to make one excited and nervous in equal measure. It poses an interesting psychological dilemma for the team.

Sky Sports have jauntily informed us that 'Ireland have weathered the worst of this playoff tie'. Wouldn't be so sure. The simplest formulation is that if Ireland keep a clean sheet, they qualify.

Read more: Steve Finnan Is Bestowed With A Great Honour By A Chinese News Agency

Football
7 months ago
By Balls Team
How The English Media Reacted To Ireland's Shock Euro 88 Victory
Football
1 year ago
By Michael McCarthy
In Pictures: The Day Ray Houghton Put The Ball In The English Net
36

Football
7 months ago
By Balls Team
How The English Media Reacted To Ireland's Shock Euro 88 Victory
Football
1 year ago
By Michael McCarthy
In Pictures: The Day Ray Houghton Put The Ball In The English Net
Football
1 year ago
By Michael McCarthy
Euro 88 Night On RTE Has Everyone Sharing Their Memories Of An Incredible Time
Popular on Balls
The Rewind
2 days ago
By Eoin Harrington
Watch: Brilliant Line Of Duty Edit Sums Up Boris Johnson COVID Party Farce
30