EA Sports released another trailer ahead of the release of FIFA 17 later in the year, and the complete overhaul of set-pieces is sure to excite any FIFA fan.

For years e-gamers had limited control over a dead ball situation, with your only options being able to roughly control where it goes, and control the power. But FIFA 17 will see the welcomed introduction of an entirely new system which will give users more control than ever.

Direct free kicks and penalties: Users will now be given to ability to position the free-kick taker, and control their run-up to the ball. The varied speed and style of the approach will effect the "spin and movement of the ball" according to EA.

This could be a game changer, given that that player positioning and approach on free-kicks was always pre-determined by EA, and how a player approached the ball didn't have any impact on the resulting effort.

In-direct free kicks and corners: EA have introduced a new targeting system that will afford users to put the ball exactly where they want it. 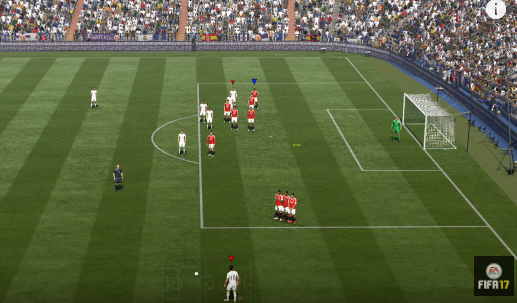 According to EA, AI controlled players will react to the situation and make runs according to the positioning of the ball. This is a feature though that has the potential to be one of those frustrating overpowered features that seems to follow FIFA every year. Let's hope EA manage to balance it correctly.

Throw ins: Throw ins are getting an update too. Players can now move up and down the line, within reason hopefully - to get a better position before picking out a team mate. Perhaps the most interesting feature is the new fake-throw option, which is essentially exactly as it sounds.

With the introduction of EA's Frostbite engine, to the FIFA series for the first time - the world's biggest football video game looks set to reach even new heights.