Derry City are the EA Sports Cup Champions after a 3-1 victory over Cobh Ramblers at the Ryan McBride Brandywell Stadium today.

It was a deserved victory for Kenny Sheils' side and a much-welcomed one after disappointing runs in Europe and the league. 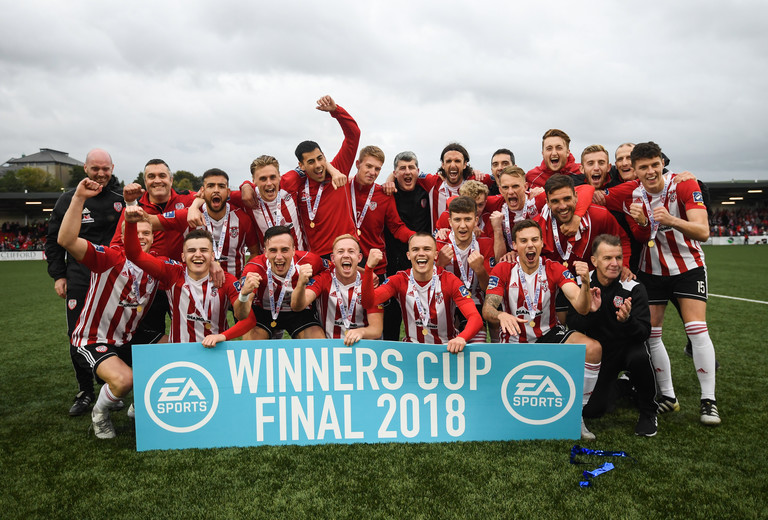 A well-taken effort from Ronan Hale got Derry off to the dream start. The talented Irish underage prospect pulled back on his right foot before slotting home with his left to put the home side 1-0 up. Chris Hull equalised for Stephen Henderson's side but a Darren Cole header and Aaron McEneff penalty ensured the favourites secured the cup.

Man of the Match was Derry's Jamie McDonagh, who told the Eir Sport that it was "a special day for everyone here at Derry City football club. It's been a while since we won a trophy."

Making his debut on Eir Sport's punditry team was former Derry man James McClean. The Irish winger was delighted post-match for his club having put into context what the game meant for them earlier in the day. A move to rename the stadium after the late Derry City captain Ryan McBride was confirmed earlier this week.

It is the first game since it has been passed so if Derry can win a cup here today at the new Ryan McBride Brandywell Stadium it would be an incredible achievement.

McClean was impressive overall. He did not hold back in his take on Derry's defensive record this season and gave an insight into the mental approach a player needs for a Cup final.

An emotional Shiels joined McClean after the match to reflect on what was an immensely proud day for Derry.

"That was our sole purpose to do it for the people of the City. With the Ryan McBride situation, you'd nearly swear it was meant to happen"