Who Is Indykaila? We Investigate Twitter's Most Famous Transfer Bullshitter

If you are a football fan and have a twitter account, chances are you are familiar with the work of full-time 'ITK' (or In The Know) agent Indy Kaila.

If you haven't heard of him, this is a twitter account with over 200,000 followers who tweets up to 100 times a day about football news and transfer rumours, even when the transfer window is shut. The stories he posts are often a grammatical train-wreck, a link to a dodgey looking site, and the most ridiculously wild transfer speculation imaginable, and yet, the account has more followers than most highly respected sports journalists.

There are a number of possibilities as to who this person is, but none of them have been confirmed and they probably won't be any time soon. For the time being we can just speculate as to why this account has become somewhat of an internet sensation, and try to gain an insight into the person behind the ridiculous "Press" avatar. 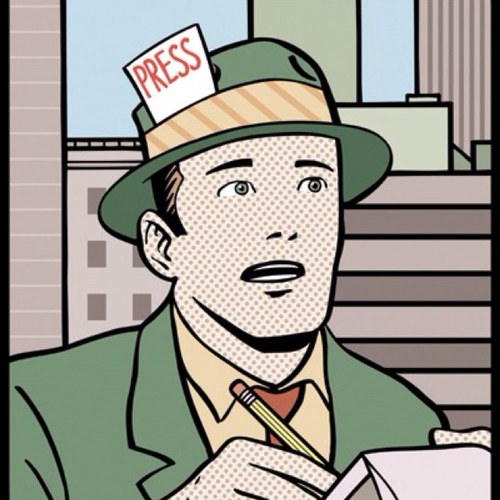 Lets start by taking a look at some of @Indykaila's tweets from the past 24 hours:

To anyone who has so much as watched a game of football, the above is absolute nonsense. These tweets are typical of the account and they all seem to follow a similar pattern:

i) Be as vague as possible.
ii) Throw in random big club hashtags for the craic. #AFC #LFC #UFC
iii) Don't worry about grammar, people will get the jist.
iv) Capitalise random WORDS throughout such as "Liverpool JOIN the race..."
v) Wildly speculate possible signings based on other people's speculation.

It's quite clear that @Indykaila is a parody account. It can't be a deluded person devoting their life to making up fake stories and posting them in an effort to resemble some form of credibility, can it?

Some people seem to think it is. The blog 'Indy Liar' was set up to "expose the fraud", and features a long winded post aiming to prove that he is not in-fact a credible transfer story source with detailed arguments such as:

Has anybody noticed how he gives multiple options to a transfer then retweets the one he gets correct? For example I think he has tweeted Ronaldo might stay at Madrid, sign for Chelsea, United, PSG, and Monaco. My 88 year old grandmother who hasn’t watched a game since the 1966 final would be able to predict that.

He claimed in a Tweet (Indyliar has saved it) that he worked for The BBC. Just called BBC sport and that is not true.

Surely this is someone taking things far too seriously. Doesn't everybody know that already? 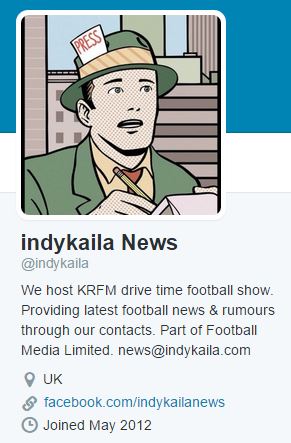 When you look at the account, the absolutely ridiculous cartoon reporter as a profile picture is a dead giveaway, for starters, then the "KRFM drive time football show" is your next clue, as googling that will give you a poor quality YouTube video with two lads trying to cram as many sports journalist cliches into a 15 minute podcast as they possibly can.

It's blatantly obvious that this account is not run by somebody who takes it seriously.

Well, chances are, these people are not following for accurate inside information on transfer deals. They, like the rest of the internet, want a laugh. Parody accounts are some of the most successful on twitter. @USASoccerGuy and @EvilKagawa are two that immediately jump to mind when you think of some of the most commonly mentioned sports accounts to follow, the only difference is that they don't seem to pretend to really care that people believe them in the way that Indykaila does.

The account occasionally tweets out really odd messages, sometimes even abusive, which does actually give some weight to the idea that this person genuinely believes they are a serious agent, but that is most likely just the poor judgement of someone who has not yet fully matured. As for the site that is advertised on the twitter page... 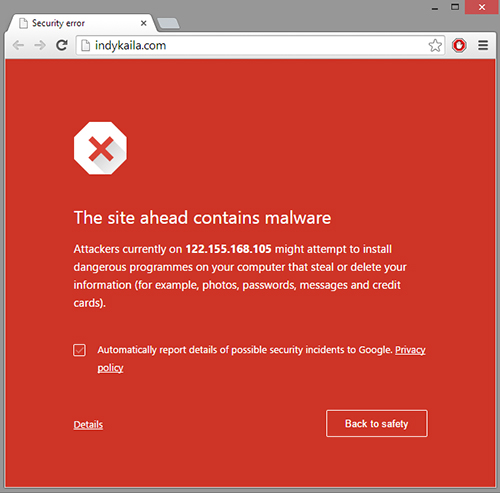 The account has several links to the city of Leicester. The supposed radio show they broadcast on KRFM, is a Punjabi radio station based in Leicester that does not have a drive time football show. The "Football Media Limited" corporation does not exist, but some websites claim that the trademark was taken out on a building in, you guessed it, Leicester. And also there are occasional tweets like this:

Father of Leicester striker Nugent was led away by stewards after attempting to speak to Nigel Pearson as he took his seat before kick-off.

So odds are, Indy Kaila is a young man of Indian descent in Leicester, who started out an ITK account to troll some football fans, and had it snowball into an uncontrollable avalanche of bullshit that has become one of the most popular parody accounts on Twitter.

There is a rumour circulating on the web that the original owner of the account was an employee at KFC, which seems to have stemmed from this strange tweet:

Can you follow us back @kfc? Work related question.

The rumour then continues that he sold the account to someone who now runs it as a parody. For the moment though, these are just rumours as there is no evidence of this being the case.

Why does he do it?

Probably money. With a twitter account that has over 200,000 followers, you are an attractive property to marketers and companies who want to reach your users. He links to heavily advertised sites, and regularly retweets obscure betting companies' offers and promotions. What probably started out as a troll account is now probably earing some decent money.

Fair play to him. In a social media obsessed society he has found a platform where people ARE interacting with his content, regardless of how ridiculous it is, so we aren't trying to knock him. We do worry for the naive who are not experienced with the internet enough to see right through his tweets, but ultimately posting twitter rumours are a victimless crime. It's not even a crime. It should just be ignored, but instead this guy's tweets are retweeted all over the place, so again, he must be doing something right.

So, finally, who is Indykaila?

A football journalist with great sources? No.
A pathetic troll who has too much free-time? Probably not.
A random bloke who works in KFC? Possibly.
A social media genius who's account continues to grow? Most likely.

Football
4 hours ago
By Jonathan Browne
Bayern Munich Vs Barcelona To Be Played Behind Closed Doors
Football
5 hours ago
By Eoin Harrington
Shamrock Rovers Slam FAI Decision To Change U14 League Format
Football
7 hours ago
By Eoin Harrington
Michael Carrick Explains How Violence In Rome Inspired Famous 7-1 Win
Popular on Balls
Football
3 days ago
By Colman Stanley
Alex Ferguson Names His Greatest Captain, And It's Not His Most Successful Captain
Rugby
3 days ago
By PJ Browne
Trevor Brennan's Sons Played In The Same Top 14 Game At The Weekend
Football
1 day ago
By Gary Connaughton
Frank Lampard Reveals Ruthless Nature Of His Sacking At Chelsea
The Rewind
2 days ago
By Colman Stanley
New On Netflix Ireland: Your Guide To December's New Additions